Schröder: “Cannot allow that to happen”

A lack of discipline on set-pieces costs the Zerofivers the chance to take a point in Gladbach – Beierlorzer: Determined instead of nervous ahead of the match against Bayern 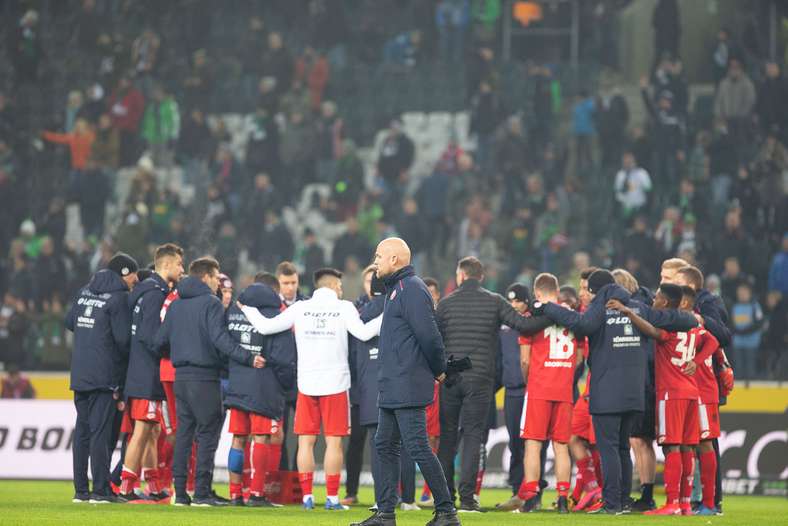 The Zerofivers fell 3-1 to Gladbach, despite taking the lead through a Robin Quaison goal.

Despite a decent performance on the day, 1. FSV Mainz 05 suffered their second defeat of the Rückrunde in as many games. “We’re definitely not sugarcoating things,” was how Rouven Schröder began his analysis of the 3-1 defeat to Borussia Mönchengladbach, “We failed to reward our hard work tonight.”  In the end, it was Mainz’s sloppy defending on two free-kicks that handed Marco Rose’s side their eighth home win of the season.

Achim Beierlorzer’s team started the game well by not allowing their opponents much space, pressing hard in midfield, supporting one another and breaking up Gladbach’s attack. The Zerofiver game plan appeared to be going off without a hitch as Moussa Niakhaté played a slick pass through to Robin Quaison, which the Swede finished off beautifully. Shortly after, Jean-Paul Boëtius could have doubled Mainz’s lead.

Then came the free-kick: Oscar Wendt’s delivery landed in front of goal where Alassane Plea found himself unmarked and was able to put the ball past Robin Zentner. “That cannot happen,” said Schröder. Once again, Plea found himself with plenty of room and was able to hand his side the lead, yet again off a free-kick. “It’s possible to lose track of your man – everyone who has ever played knows that. In a game, it’s important to not let that happen often, and that you remain alert. You can do so much on your own, run a lot, create chances and so on, but in the end, it’s these small slip-ups that cost you the game. Saying that we did a decent job still doesn’t bring us any points,” said the visibly frustrated sporting director.

“We’re obviously frustrated,“ said the Zerofivers‘ head coach. “The team know what they have to do in those situations. It’s what we practice every week in training. As a coach, you’re not sure what else you can do because it’s clear how hard Gladbach had to work to create chances from open play. That’s why the set pieces hit us so hard.” Was it lack of concentration, carelessness? “We got it wrong.”
Between these two Gladbach goals, a good game developed and Mainz had chances on the counter during this phase. The team also survived two or three big Borussia chances, as Rose’s men started to move up a gear. “We felt like we had a chance,” said Schröder. “We had opportunities at 1-1 and 2-1 but we didn’t take them. Their third goal killed the game after that.” Florian Neuhaus caught Zentner off guard and backpedalling and took advantage to make it 3-1 to the hosts, shortly after Daniel Brosinski  and Karim Onisiwo were both denied an equaliser.

“We didn’t play badly but we need to pay more attention. We could have taken something from the game. We weren’t far off but we were lacking something,” explained Beierlorzer. “We have to be more focused, energetic and decisive when it comes to set pieces. And, of course, more clinical with our own chances.”

First, though, the team will need to process everything. “We aren’t getting worried. We’ve played well in three consecutive games but didn’t get any points from them. It should have been at least three points. But no one needs to be put under any more pressure than they already are.” The potential of losing at home to Bayern on Saturday doesn’t change anything. “Should we bury ourselves? Should we run and hide and lock ourselves away? No! This is sport. I have to go into the next game with courage and determination. That’s definitely my attitude and it’s the same for the players,” said the head coach. “All that matters is avoiding the drop on Matchday 34.”