Schröder: All in all it was a deserved point

The post-match quotes from the game in Cologne. 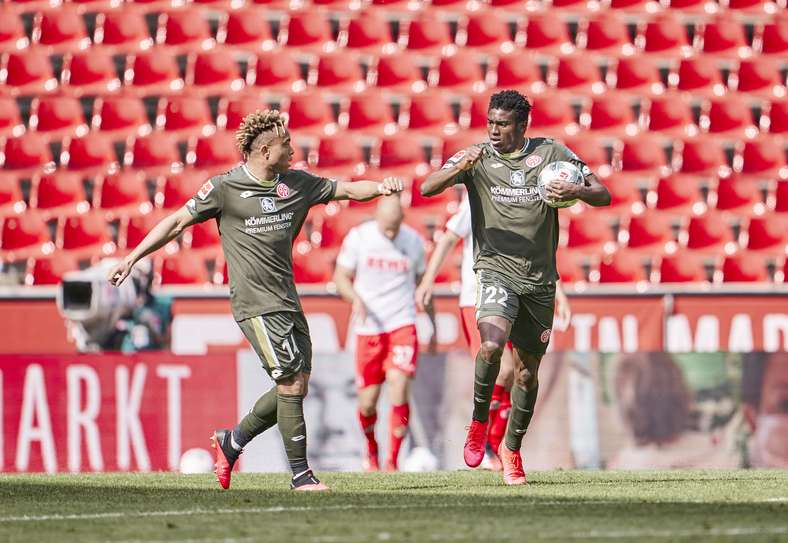 The goalscorers: Taiwo Awoniyi & Kunde Malong secured the draw in Cologne to take a deserved point.

After an energetic performance from Mainz in their first game since the end of the season break for the Coronavirus, the Zerofivers drew 2-2 with Cologne after coming back from 2-0 down following a strong second half performance.

The full post-match reactions are below:

Achim Beierlorzer: "We did a great job – and Cologne played well also. We played to requirements and played a really good game of football with a fair result. I think the 2-2 is well deserved. I can only praise the team’s morale after recovering from going 2-0 down and in the end we could have even won the match.”

Rouven Schröder: "All in all it was a highly-deserved point and a great performance showcasing both the will and mentality of the side. Conceding early was unfortunate, but we were competent, had good interplay, and were very determined. We could have equalised through Djanga and Karim. After the break we fell asleep after a tactical foul and conceded again, but then a jolt went through the team and they started to really want the points from Cologne. The first goal was really well executed, and afterwards it was like we wanted more. Compliments to both teams for trying to win in the closing stages, the game was wide-open. It was a good start. We are now looking forward to our first home game since the restart, even though there will be no fans present.”

Taiwo Awoiyi: "I'm really happy about scoring my first goal for Mainz! We came back very well as a team today and fought our way back into the match!"

Kunde Malong: "I had the ball and I saw that I had some space to shoot. I feel good, it's great to have helped the team by scoring that goal."

Ridle Baku: "It felt so great to be back in a stadium. Of course the fans were a bit further away. It felt like being on the training pitch, you can hear everything, all the instructions. I think my own performance was a bit rusty."