Quaison: “That has to be our goal” 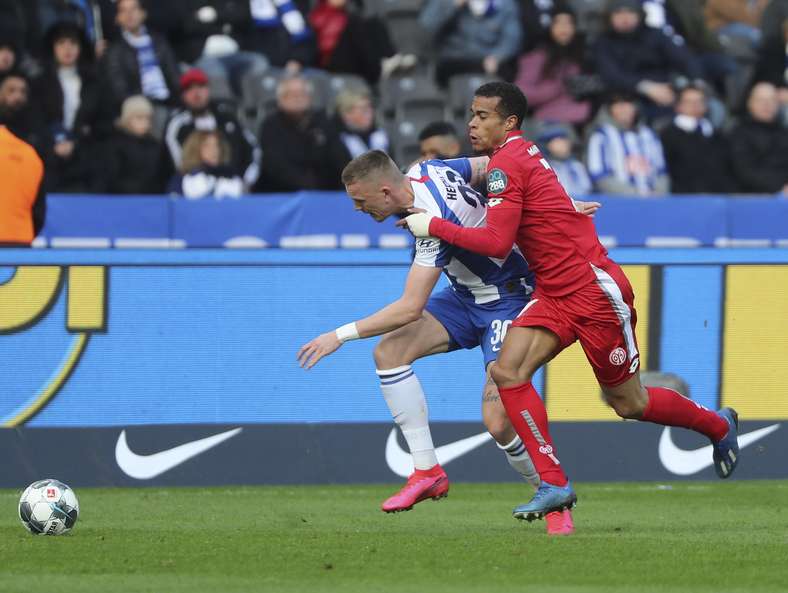 Robin Quaison wasn't just effective in front of goal, but also played an important part in defending from the front.

Robin Quaison helped fire his team to a 3-1 victory in Berlin after scoring his second hat trick of the season, ranking him among the highest scorers in the league. The 26-year-old now sits on eleven Bundesliga goals this season, joint with fellow attackers Reus, Niederlechner and Hennings, with only Lewandowski (22), Werner (20) and Sancho (12) having scored more goals than the Swede. The striker is now looking towards the next one, as FC Schalke 04 visit the OPEL ARENA on Sunday (18:00 CET).

Quaison was heaped with praise for his performance in the capital. Not just for his three goals, but also for the tireless running he put in, along with Ádám Szalai and Levin Öztunali, to constantly disrupt Hertha’s build-up play. “Robin has great movement, bundles of pace and is a great finisher,” Achim Beierlozer praised his striker. You can’t quite score three goals every game, but the coach has set his star man the task of building on his performance, working hard in defence and establishing consistency.

“I just felt really good. We got three points, I scored three goals. It was a perfect day,” said the Swedish national team player. “However it was only one game; the season isn’t over yet. There are lots of things we can improve on still.” And the team may have to improve in these areas if they are to get a result against the Royal Blues.

“Of course we’re going into the game to win and take the three points,” said Quaison. “We need to concentrate, minimise the mistakes and take our chances. We are capable of playing really good football as a team. Our problem so far has been that we’ve given away too many easy goals. We played really well against Leverkusen, Freiburg and Gladbach, and in the first 60 minutes against Bayern. However, we lost concentration at key moments; we weren’t alert enough. And that’s cost us points.”

It was a convincing performance from Mainz in Berlin, especially from a defensive standpoint. Part of that was down to new central defender Jeffrey Bruma, who was given his debut. "Jeffrey is a very good addition to this team, he's proven that. Our defence really isn't bad at all, sometimes it just comes down to lapses in concentration, like in Gladbach we just lost Plea on a free kick for a split second and he scored. The problem isn't our defence as such, it's more that we have to be more compact for the full 90 minutes. That's what we took away from the game in Berlin. We have to reproduce that stability we showed there for longer stretches of every game," said the Mainz man.

Schalke will be an incredibly hard stone to turn, you only have to look at the table to see that. "But every game is hard and we will do our best to win this one as we do with all the others. The table doesn't currently reflect how well we've been playing. We haven't played badly, we've just lost a lot of close games," explained Quaison. "We have to keep concentrating on our own game and how we can get better so that we grab more points. If we do that, then I have no doubt that we'll have accomplished all our goals come the end of the season."

It's possible, no doubt about that

Quaison wants to emulate top goalscorers of the past Andre Schürrle and Shinji Okazaki, both of whom scored 15 goals in a single season for Mainz. Jean-Philippe Mateta came close last year with 14 goals. "Of course chasing the record gives me a lot of motivation, and it's definitely possible, no doubt about that," said the striker.