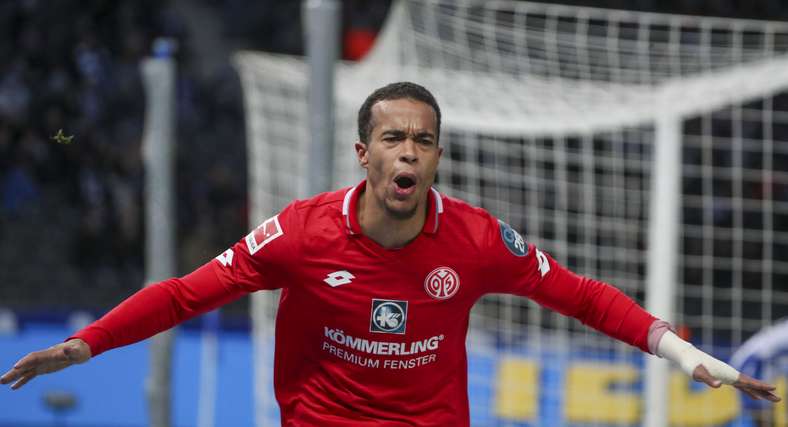 With his second hat-trick of the season (the first came in the 5-0 win against Werder Bremen), Robin Quaison led Mainz 05 to a deserved 3-1 win away against Hertha BSC on Saturday afternoon. The Swede gave Mainz the lead in the first half and doubled the away side’s lead with a second goal in the closing stages of the match. After an own goal from Jeffrey Bruma, the goalscorer sealed the win from the spot in injury time.

Achim Beierlorzer made three changes to the starting XI from the loss against FC Bayern München, giving starts to captain Danny Latza, January signing Jeffrey Bruma as well as the experienced Ádám Szalai in place of Kunde, Jean-Paul Boëtius and Jean-Philippe Mateta.

With Bruma at the centre of three at the back as well as Ridle Baku and Daniel Brosinski on the wings, the head coach wanted to be solid in defence, without neglecting attacking opportunities. And the plan worked convincingly in the opening stages of the match as there were nothing more than half chances to report, with only a small chance for Pascal Köpke (5’) and another for Szalai on the other end (8’) to report in the opening 15 minutes. When the first real opportunity of the match came after 17 minutes, the Zerofivers grabbed it with both hands. Levin Ötzunali set up Robin Quaison and the Sweden international beat Niklas Stark to shoot from near the edge of the penalty area and give Mainz the lead. The Swede could have even scored a second two minutes after – Ötzunali again set him up with a chipped ball, but the ball went slightly too far on the first touch, which enabled Rune Jarstein to clear the danger (19’). Mainz stayed compact after this and Hertha couldn’t find any way past Mainz’s high-pressing and well-organised defence.

The first time Mainz’s number one Robin Zentner was really called into action was after the half-hour mark. A shot from Arne Maier from range looked dangerous, but the Mainz 05 product had no problems dealing with it (30’). There was much more danger six minutes later on the other end of the pitch. Latza sent Quaison on his way with a great pass, but this time he was unable to score his tenth goal of the season as the shot was off target, going wide of the post (36’). That was it for the first half and Mainz went into the changing rooms with a deserved lead.

While the Zerofivers went into the second half with no changes, Hertha coach Jürgen Klinsmann made two changes and brought Dilrosun and Lukebakio on for Stark and Grujic. The hosts continued to struggle, but the Zerofivers’ attacks were initially just as weak. The first half-dangerous situation came as substitute Lukebakio took a shot from distance, which just scraped over the bar (58’). Mainz’s first effort of the second half came from Leandro Barreiro, but the shot fired wide (59’). There was little action in either box in the following minutes, where Berlin maintained their high share of possession. The ball rather randomly found itself at the feet of Köpke in the 68th minute, who hit the ball into the side netting. An effort from Aarón, who had joined the game in place of Brosinski, also ended up in the side netting in the 73rd minute.

Szalai could have finished the game off in the closing stages after a fine pass from Aarón, but the Hungarian couldn’t quite connect with the volley and the shot went wide (78’). However, Quaison did better a few minutes later as Karim Onisiwo, who had just come on for Szalai, sent in a perfect pass and Quaison just had to tap the ball in to double Mainz’s lead (82’). Those who thought it was all over were in for a surprise as Hertha scored a lucky goal to half Mainz’s lead just three minutes later. The ball hit Bruma’s chest from a Hertha corner and Zentner was unable to stop the ball crossing the line from there (85’). Marius Wolf was sent off for the hosts after being shown a second yellow card for using his elbow against Onisiwo one minute before the end of the match in a fiercely contested period of injury time. Onisiwo was clearly switched on and had a chance to score in added time, but his effort went just wide (90+1’). The Austrian was awarded the decisive penalty just seconds later, which Quaison converted to complete his second hat-trick of the season and end the match at 3-1 (90+4’). The Zerofivers could celebrate their seventh win of the season as the final whistle blew and so Mainz have 21 points after as many matches played. Schalke 04 visit Mainz for a carnival match on Sunday 16th February.