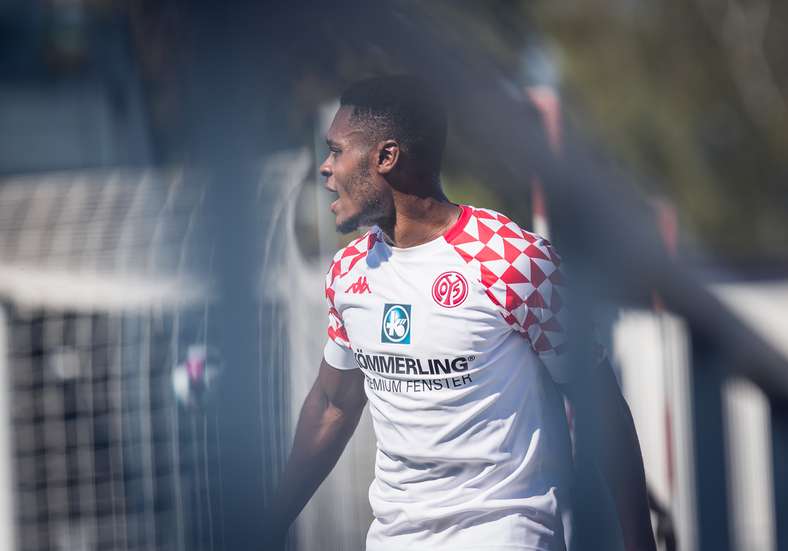 Academy graduate Ridle Baku was singled out for praise after his impressive performance.

The fact that the first game of preseason was an intra-squad friendly did nothing to detract from a fantastic performance by several Mainz 05 players. Achim Beierlorzer picked the teams with the aim of having a balanced and competitive game, and he made use of his substitutes to mix things up frequently. The result was a game of football that was not only entertaining, but provided key insights to the head coach. Speaking after the game, Beierlorzer said “We’ve gained some valuable insights today that are extremely important for the team’s progress.”

SpVgg Ingelheim’s Marcel Wabra refereed the match at the Bruchweg, which was split into three 20 minute periods. The side wearing our new white away kit went on to hammer their opponents, who donned the new red home kit, by a score of 6-0. Jean-Philippe Mateta, Abass Issah and Levin Öztunali’s goals in the closing minutes of the match once again exposed similar defensive problems to last season when Mainz shipped 65 goals.

“This has been a long and tiring week of training and so we were starting to notice that the players who played the whole game were showing signs of fatigue by the end,” said Beierlorzer, adding “It was frustrating towards the end because some of the boys let themselves go a bit.”

Nevertheless, the 52-year-old was satisfied with how preparations are going so far. “We’re focusing on the smaller details to improve on our overall game,” he said, referring in particular to the first third of the game. “Those 20 minutes were top-notch. That’s the kind of level we’re aiming for, with compact, efficient build-up play, which is what I wanted to see. We do need to develop in other areas but that’s what preseason is for.”

During the match, it was the team in red who looked as though they might take home the win. Beierlorzer praised Jonathan Burkardt’s performance after the match, despite the striker missing two golden opportunities and having a shot saved by goalkeeper Florian Müller. However, he “created chances for himself through great runs behind the defence,” said Beierlorzer. Down the other end, it was Mateta who missed after a perfect through ball from Ridle Baku. The latter then came close off a header, while Aaròn hit the post following a free-kick. Goalkeeper Robin Zentner was also able to make a quick reaction save to keep out new signing Dimitri Lavalée’s header. Karim Onisiwo set the tone for the first third with an impressive performance. The Austrian won possession at the halfway line and then went on a spectacular solo run before placing a shot inside the far post.

The striker was definitely part of the select group of players who Beierlorzer later described as being “in top form already,” and who he wished he could stick in the freezer to preserve their good form for a later date. Baku was also included in this group. “When you analyse his game, then you’ll see exactly the kind of game we want to see from our full-backs: keeping things tight at the back while also constantly making runs and playing in great crosses,” said Beierlorzer. Onisiwo got on the scoresheet again in the second period, with Aaròn also curling in a direct free-kick to make it 2-0.

Holtmann and Issah with a chance to prove themselves

The match also marked the return of Gerrit Holtmann and Abass Issah, who spent last season out on loan at SC Paderborn and Utrecht respectively. “Gerrit’s pace is a great weapon, one that is of use mostly in attack, but we also saw in the last game when he was able to sprint to the middle of the pitch and clear the ball that it can be of use in defence as well. He has been able to pick up more experience, and will now have a chance to prove himself here again,” said Beierlorzer. The same goes for Issah, who has returned from his loan spell in the Netherlands. “He scored a nice goal at the end, but we also witnessed him miss an open net earlier on,” said Beierlorzer. A decision will be made at the end of preseason to determine the future of some of the players, and whether it includes going out on loan or staying to compete for a spot in the squad.