Beierlozer was happy with his team’s performance, despite the defeat against Emmen, with Ji and Mwene both making comebacks. 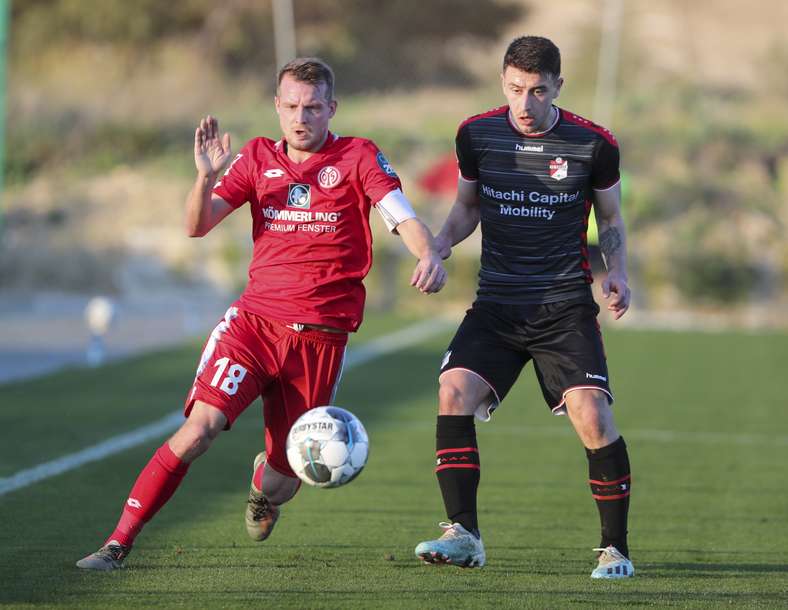 Achim Beierlozer was happy with his team's mentality.

The sun ultimately played its part in the Zerofivers’ friendly defeat against FC Emmen. The Dutch side hit Mainz on the counter in the 70th minute and a misjudgement from Daniel Brosinski in the midfield, whilst blinded by the bright-shining sun, allowed for Luciano Slagveer to get in behind and score the winner (3-2). However, despite the result, overall the positives outweighed the negatives for Achim Beierlozer’s side, as the head coach stated after the game.

It was a frustrating second half for FSV, characterised by two open goals and a flurry of missed opportunities, despite being the superior side. Nevertheless, Achim Beierlozer was happy with his team’s performance, who put in a strong showing whilst being tested to their limits after an intense day of training on Monday. “We were unlucky to concede the goals we did. Brosi simply misjudged the landing of the ball for the third goal as the sun made it difficult to see. I couldn’t even see from where I was standing. We were clearly the better side in the second half and should have taken the lead,” explained the head coach. His team were particularly impressive with their pressing and aggression, taking on the advice their coach had given to them. “We told the boys to press high up the pitch and not to allow the opposition to control the ball in our half. After such an intense training session, the players were pushed to their limits once again. Overall I was happy with how they played; they showed a real willingness and determination.”

Given the strong performance, coupled with Philipp Mwene and Dong-Won Ji’s returns to action, the positives far outweighed the negatives on the day. Nevertheless, Beierlozer went on to emphasise that certain things will be addressed over the coming days in order to help the team pick up better results against BVB on Saturday (17:00 CET) and, more importantly, when they kick-start the second half of the season against SC Freiburg at the OPEL ARENA. “Of course we have some things to work on still, especially in terms of defending. It never works when the defence drops deep, while the attackers are still pushing forwards. That creates far too much space in the middle, that good teams can take advantage of,” the 52-year-old analysed the game. However, the coach didn't want to get too hung up on wasted chances, and said that a lot of it could probably be attributed to the tiredness of the players after what was a big morning session.

After long spells out with injury, the comebacks of both Ji and Mwene will give the team a boost: "It was the first training session back for both of them and they did well. We'll keep working with them to try and prevent further injury, but they're both on the right track and I'm really happy for them." The players had similar feelings to the coach: "It feels so good to be back out on the pitch with the other lads. We'll take both positives and negatives from this game, but this is why we're doing a training camp - to make ourselves better and to prepare for the first game back," said Mwene.

After a recovery session on Wednesday morning, the lads had the afternoon off as the coaches look to stagger the training periods and give the lads some rest. The weather forecast continues to be good for the Zerofivers and they will try to make use of all the sun on the Costa del Sol before their return to Germany in the coming days.