Positive signs in a relegation scrap

A cool, calm and collected performance in Frankfurt has laid down a marker for the rest of the season. 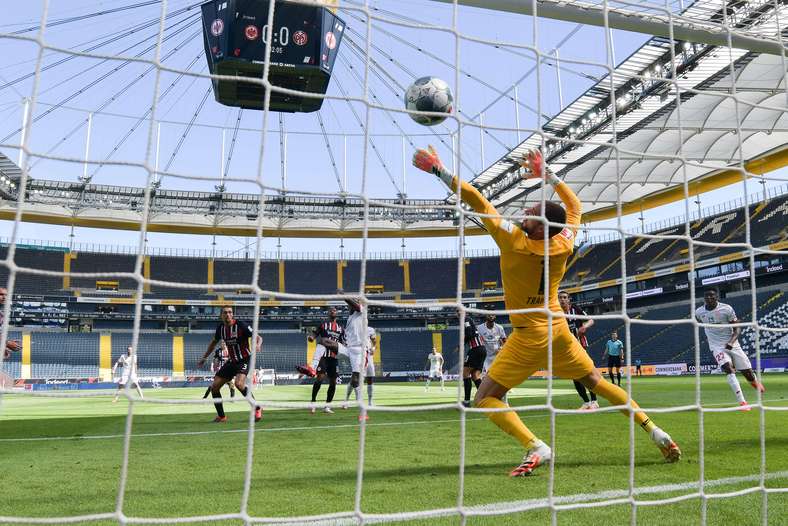 Mainz’s first victory since the Bundesliga restart is a positive sign, and one which will please Achim Beierlorzer; the 2-0 Derby win over Eintracht Frankfurt signalled the team’s unbridled desire to be victorious in this fierce relegation battle. “It’s not always the case that you get rewarded. We did today though,” FSV head coach Achim Beierlorzer said after the game on Saturday.

It was Mainz’s third Derby win in a row, in which the team set an important precedent at just the right time. They were combative, energetic, tactically sound, switched-on and played as a unit. “Of course it was a really important win for us, especially the way, in which the team played,” the Zerofivers’ head coach said. “They really wanted to win, you could see that today. Our side showed the most desire.”

Beierlorzer had prepared his team well for the Derby, and the particular challenges, which a fierce local rivalry presents. The main aim was to limit Frankfurt’s capacity to launch their usual swift counterattacks, and fight for success with energy and power. “Defending as a group, playing with passion, getting something positive from every successful challenge,” Rouven Schröder said. “But this level of intensity mustn’t be a one-off. It’s a must have for every weekend. Sometimes it pays off, sometimes it doesn’t, but if you can’t win a game, then you have to have to make sure you’ve given it everything,” explained Mainz’s sporting director.

Beierlorzer tweaked both tactics and personnel to face a Frankfurt side, which were in a high following the midweek win against Werder Bremen. Phillipp Mwene replaced the suspended Ridle Baku on the right side of the defence, and marked the dangerous Filip Kostic out of the game. Daniel Brosinski patrolled the flank from the left-back position and looked a threat from set pieces. In the centre of defence, Jeremiah St. Juste and Moussa Niakhkaté provided solidity at the back, limiting Eintracht to zero shots on target.

A powerful midfield pivot formed of Leandro Barreiro and Danny Latza halted Frankfurt and screened their teammates at the back, while constantly seeking to feed the attacking players ahead of them. Constant communication and coaching out on the pitch was another mission for the Zerofivers to complete. “We can tell the players what to do, they then need to have good individual performances and contribute to the team performance. That happened today. We had really put everything on winning today,” Beierlorzer said.

As Beierlorzer called it, the “door opener” was Brosinski’s corner on the stroke of half time, which was powered home by Niakhaté. Mainz could have already been in the lead had both Robin Quaison and Taiwo Awoniyi not spurned decent chances. After Mainz’s opener, it was Jean-Philipp Mateta, who couldn’t convert after St. Juste’s flick on from another pinpoint Brosinksi corner.

“The second half really showed our mentality,” said Mainz’s head coach. The Zerofivers withstood a period of pressure, began to defend deeper, but continued to defend well and hit the Eagles on the break. Twice Mainz had the ball in the back of the net following quick counters, but both were disallowed due to marginal offside decisions. Neither Mateta’s finished from Quaison’s pass nor Quaison’s goal would stand, but the Zerofivers would get their reward for a resolute defensive performance, and doubled their lead late on. Beierlorzer praised his team’s togetherness and spirit. “You could feel their will to win.”