"If we are balanced, it’s an even match-up" - the Zerofivers are optimistic about their chances in Berlin. 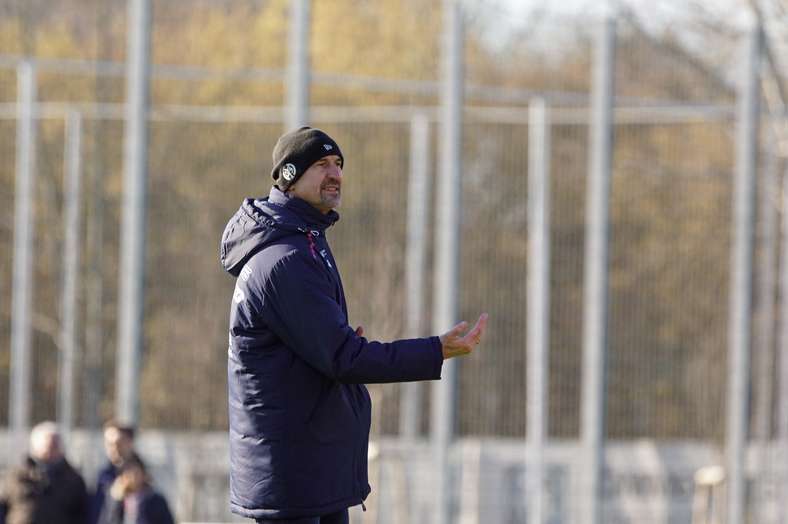 "Nobody wants to lose, especially not in Berlin again" - Beierlorzer.

Five points separate Mainz 05 from this weekend’s opponents, who are two places ahead of the Zerofivers. Achim Beierlorzer is heading into this challenging away fixture (Saturday 15:30 CET) full of respect for Hertha BSC , but also with a sense of cautious optimism.  After three consecutive league defeats, the goal is to tidy up the unforced errors that have plagued the Zerofivers in recent weeks, “and to win in Berlin. It’s possible,” Beierlorzer said in his press conference on Thursday.

The requirement for victory is to travel to the Olympiastadion full of optimism, and the team must create that positive spirit themselves. Mainz need to find “balance on the pitch in this away game, so that we are strong at the back even when we have the ball.” Beierlorzer stressed the importance of defending with the ball. “That means being cautious about the movements of opposing players even when you have the ball. That’ll be a key task for us.” He went on to explain that will also be important to be flexible and react to a change in proceedings and to be patient, “because they’ve become really stable and don’t concede as many. If we are balanced, it’s an even match-up.”

The capital club, thanks to investor Lars Windhorst, spent around €77 million during the January transfer window. Santiago Ascacíbar (VfB Stuttgart) and Lucas Tousart (Lyon), who will stay on loan in France until the end of the season, will both strengthen the midfield, while they have also recruited attacking reinforcements in Krzystof Piatek (AC Milan) and Matheus Cunha.

Jürgen Klinsmann’s team gave Beierlorzer a lot of food for thought in both of their encounters with Schalke 04. At home, the Berliners played out a goalless draw, before losing 3-2 after extra time in Gelsenkirchen in the DFB-Pokal.

“I’d say that we can learn a lot from the two games they played against Schalke. In one, Hertha played with four defenders, and then switched to a three-at-the-back in the Pokal in midweek. That was a surprise. On the other hand, we know about their players and what they’re capable of. They’ve been more defensive recently, following a philosophy of making sure they don’t concede, then seeing what happens on the front foot. It was a bit different in the first half against Schalke though, and we got a few decent pointers,” said Beierlorzer.

The Mainz head coach went on to say that it’ll be exciting to see how Hertha set up at home. With two strikers, or with one up top and two wingers? For the Zerofivers, however, the main question is one of a renewed taste of victory. “Nobody wants to lose, especially not in Berlin again,” Beierlorzer said. Defensive stability, not letting our opponents have any easy chances and concentrating on the task at hand. These are the things the team needs to do to get a result in Berlin.

Competition in the Mainz squad

The personnel situation looks good. New signing Jeffrey Bruma trained throughout the week and is another option at the back. “From the start, he’s shown that he can help us a lot. We’ve now got to think hard about how we want to proceed. We’ve got two more training sessions to decide,” were the gaffer’s words. Jeremiah St. Juste and Moussa Niakhaté put in good performances in central defence against Bayern, while Danny Latza and Leandro Barreiro played well in central midfield. The competition for a starting berth is high. “That’s hugely important for us, in order to get a win in Berlin. Who starts is up to us,” explained Beierlorzer.