Jan-Moritz Lichte has to do without the departed Baku and suspended Niakhaté for his debut as head coach in Berlin. 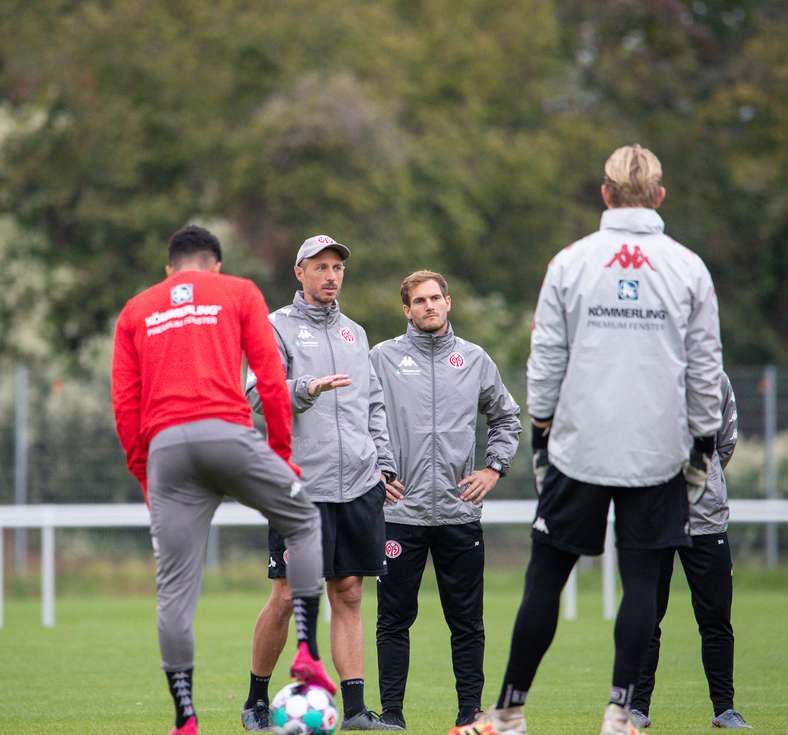 In the short week between the home defeat against VfB Stuttgart and the game on Friday evening (20.30) at Union Berlin, a lot has happened at 1. FSV Mainz 05. Jan-Moritz Lichte, who was appointed head coach on Monday, has to do without Ridle Baku, who has moved to VfL Wolfsburg, as he attempts to score the first points of the season at the Alte Försterei. The suspended Moussa Niakhaté is another regular missing from the back four.

Nonetheless, the Mainz-based team is eagerly on their way to Berlin-Köpenick. "We must look forward," said Rouven Schröder at the press conference one day before kick-off. "I feel aggressive, I am looking forward to the fact that the match is nearly upon us and we’re here with the message that we represent Mainz 05 with all our passion and everything we have inside. I'm looking forward to us playing a really good game in Berlin".

Lichte, who took over from Achim Beierlorzer on Monday, had four training sessions to develop a concept with the team that will help the team chemistry and bring some peace to the whole squad. On Friday we will see whether the players reacted to him in this way, and whether they put into practice everything they have worked on together.

We have set the process in motion

"The most important thing for me was the first speech to the team, to clearly convey to them what I have in mind, what I expect from them, and what they can expect from me," said the previous co-trainer. "We have set the process in motion to implement this in training: Interpersonal, from the expectations on and off the pitch, but also in the basic tactical formation. These are the things we can influence before Friday. And these are the conversations that are most important to me: How do we align ourselves, what do we want to consider, what are the things that perhaps show the difference between us and Union? Where can we gain advantages, where do we have to pay attention? We will prepare ourselves for the game in a football-like manner, in order to have the right solutions, in order to manage everything on the field and with passion and dedication to get everything we have out of it. That's what it's all about."

The absence of Baku and Niakhaté means that Lichte must build a new defensive formation. The obvious change is that Phillipp Mwene takes over Baku’s position and Daniel Brosinski remains on the left. "Phillipp is a player we absolutely trust to take over," said Lichte. There would also be the opportunity to push Brosinski to the other side and bring in Aarón, "who has shown often enough that he is capable of playing in the Bundesliga," said the 40-year-old. The Spaniard has shown good form in recent weeks and could immediately play at Bundesliga level again, "I have no doubt about that. Alexander Hack will probably take over for Niakhaté.

The first goal, as Lichte emphasized at his first press conference, is to concede fewer goals. "We've already built in a few other forms of training, which might fit in a little better with what I want to see. I'm not interested in whether this is better than what we did before, it's different. And I hope that it will lead to us conceding fewer goals. We did video analysis and showed clear methods, which we took with us to the training ground. If all this works, then hopefully it will lead to success," said the 05 coach, who also pointed out the dangerous Union standards. "It will be important that the boys absorb a lot in the short time and despite the task they have to solve in their heads, have a physical presence and play with feeling and emotion".