"NOTHING WON YET, EXCEPT CONFIDENCE"

An important away win in Mönchengladbach as a milestone on a long journey - Stöger: "To take three points against an outstanding team like Mönchengladbach, that's very cool". 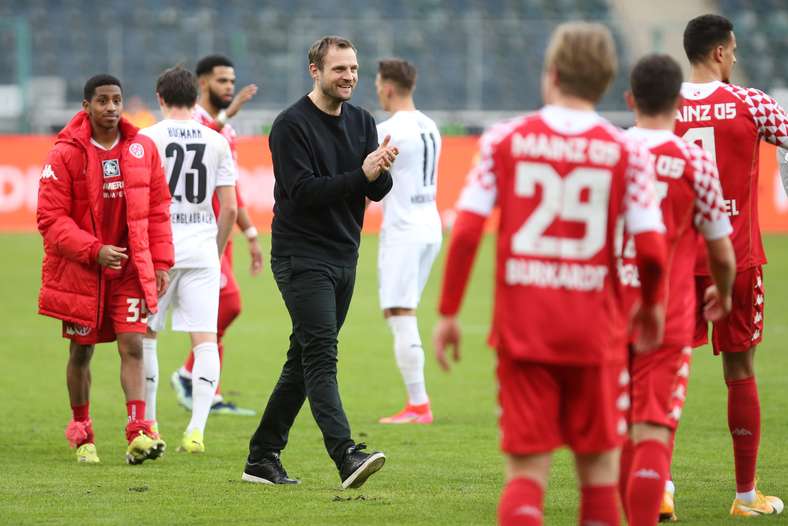 After the feelings of happiness from Mönchengladbach, the focus is already on the next task next Sunday.

For the second time in a row, Mainz were able to reward themselves in the final phase against a top team in Mönchengladbach and continue to put pressure on their opponents in the bottom of the table. The Zerofivers now have ten points from five games in the second half of the season and are fully on target in their race to catch up. However, nothing has been achieved yet. And so, despite all the justified enthusiasm on Saturday evening, from Sunday onwards the focus is already on the upcoming task against FC Augsburg in the OPEL ARENA, as Christian Heidel, Board Member for Strategy, Sport and Communication, emphasised after the final whistle. The pride in the second away win of the season at the Champions League participants is not diminished but there is still a long way to the big goal of staying in the league.

Winning goalscorer Kevin Stöger: "I think this goal feels different than last week, this time it brings three points and is much more decisive. To take three points against an outstanding team like Mönchengladbach, a bit lucky in the end, that's very cool. The substitutes are a breath of fresh air at the moment, that's incredibly important, I'm happy for the whole team."

Christian Heidel: "Football-wise, things could certainly be better, but in the end that doesn't interest us one bit. The most important thing is that the team once again threw everything it had into the game - until the 93rd minute. And then you get rewarded even if it's not a great day of football. They did everything they could to get the chance at the end, and they took it. We are a small step further. Nothing has been won yet, except confidence."

Danny da Costa: "It felt like 90 minutes of suffering. You could feel how much quality Gladbach has. But we managed to strike now and then and with a bit of luck we took the three points. I think wins like that are very important in a phase like this. I have a lot of respect for what our strikers did today, they let us breathe. They all slotted in seamlessly, no one is too shy in their work against the ball."

Ádám Szalai: "First of all, I'm happy that we took home three points. All in all, it was a very difficult game and very run-intensive, especially up front. Nevertheless, we created chances again and again, even though I'm sorry that I still didn't score. In the second half, the fresh players decided the game. We have to continue in the same way. You can see that it's working - what we set out to do and how we work. We're applying pressure, we have it in our own hands and we'll do everything to keep Mainz 05 in the first division."