Philipp Mwene on the task at hand in the closing stages of the season, and a clear statement on racism 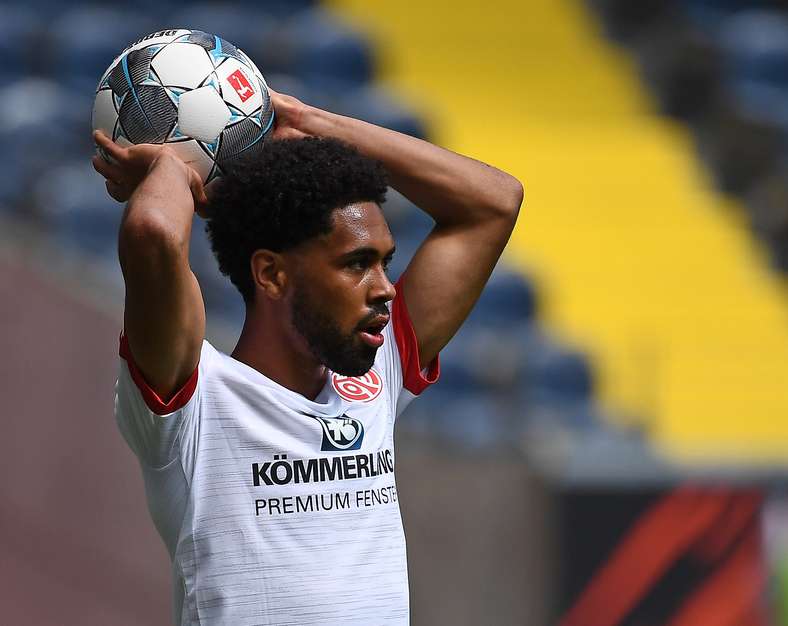 Winning two games on the bounce has been a rare feat for Mainz 05 this season. But, not for long, says Phillipp Mwene, who featured at right-back during the impressive 2-0 away win against Frankfurt last time out. “I’m confident that all of us understand what’s at stake. We will give it 100 per cent once again against Augsburg on Sunday in order to take our chance,” the 26-year-old said during a virtual press conference.

Mwene was included in the starting line up for the derby against Frankfurt to replace Ridle Baku, who was serving a yellow-card suspension. The Austrian was tasked with keeping Frankfurt’s speedy left winger Filip Kostic contained. Mwene succeeded at his task, with Kostic beating him just twice. “I tried to throw myself into the challenges and shut down Kostic as best as I could on my side. The fact that we didn’t concede made me especially happy. We need to use this momentum. Stick together. Regardless of who plays, we need to be as good as we can be during these final games,” said Mwene.

“It was a rollercoaster”

Similar statements have been made before this season already, and making them a reality is a very different challenge, something that Mwene is also aware of. “Our problem was that we would play well for one game, and then have two games where we weren’t so good. It was a rollercoaster.” This topic was also something the team was thinking about ahead of the derby. The captain and the team committee had organised a meeting, where it was agreed that everyone must put aside their individual interests and work for the good of the team by being focused on the task at hand. “We need to be honest and admit that it wasn’t always like that for us, that we may have relied too much on the potential of the squad instead of the basics. We have to have the right mentality. We need to address it constantly, and internalize it every week in order to be sure that we are working as a team and as a unit,” said Mwene.

“Everyone has to do their part; there are no more exceptions anymore," he said. "It’s about showing that we really want it, and that we don’t fall apart as a team when we’re faced with difficulties. Everyone needs to understand that when things are going well for the team, things will go well for you.”

Mwene is a young player who is able to reflect on his chosen profession, including the negative aspects. That’s why the 26-year-old also addressed the issue of racism in a video this week, after Mainz 05 posted a response the club had sent to a former member. During the press conference, Mwene expanded on his comments. With a Kenyan father and an Austrian mother, he has witnessed how people’s scepticism can turn into friendship, and how his family’s personal circle has evolved and changed after discussing and experiencing this. “I think if you never take the time to think about it, then it may be difficult to let people who may be of a different race or religion into your life. In any case, it’s sad to see that even in 2020 we are still experiencing things that my father went through 35 years ago. I’m very proud to play for a club like Mainz 05, one that has made its position clear and is against any form of racism.”

Although it is difficult to find the right words to use, it is still important to speak about this topic. “When someone writes that they aren’t a racist, but then goes on to state that they are cancelling their membership because there are nine Black players in the starting lineup, then I think that those people have no understanding of how hurtful and insulting that is, and that they lack the empathy to understand how it feels for us to be belittled because of the colour of our skin.”