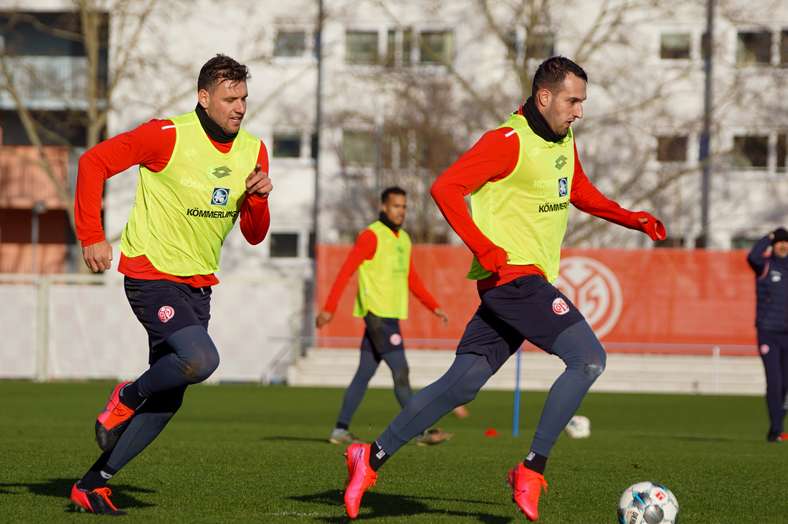 The team are taking advantage of an extra day to prepare for Sunday's match against Düsseldorf.

Not every Zerofivers started the week out on the pitch, as Ronaël Pierre-Gabriel and Philipp Mwene both trained individually due to load management. However, Alexander Hack returned to team training after several weeks out injured. Following a 2-0 win against SC Paderborn on Saturday, Mainz had an extra day to prepare for Sunday’s home showdown with Fortuna Düsseldorf (18:00 CET).

“Nothing serious, everything as it should be,” is what Achim Beierlorzer had to say after training on Tuesday afternoon when asked about the missing players. Pierre-Gabriel was given a lighter workload after being taken off against Paderborn with a thigh muscle cramp following a strong performance. The Frenchman will return to team training tomorrow, along with Mwene. “After a long injured spell, he is still feeling the effects of the game. What’s important is that he joins us again over the next few days,” said the head coach. Also present at training were Jeremiah St. Juste and Aarón, who had both been absent recently. The Spaniard has had a slight run of bad luck since losing his spot as a regular starter at left back, suffering a further setback in the form of a sprained ankle. “Then, he was sick all of last week. Aarón is back now and can compete for a spot yet again,” said Beierlorzer. However, it’s likely still too early for Hack to feature on the weekend. The centre back took part in a few of the drills before completing several laps of the pitch, along with St. Juste. “Overall, it went well without a hitch,” said Beierlorzer.

Beierlorzer picked up on a feeling of high energy and strong performances to start the week. The drills may change, but the basics remain: pressing without possession, switching over to counter, playing around the ball to break free of the opponent’s press, and shots on goal. “This is a continuous process,” said Beierlorzer. “We have an extra day to prepare this week, which allows us to add on some individual work and help every player pinpoint those areas that still need improvement, so that we get some consistency going. That will only happen when you give strong performances on a daily basis.”

The analysis of last weekend’s 2-0 win confirmed the impressions gathered on the matchday. “We showed initiative during the match, by taking on the challenges posed by the heavy rainfall and the difficult pitch conditions,” said the head coach. “We won our challenges. Most importantly, we won the challenges that are necessary in order to win such a match. The boys gave it 110 per cent. In terms of how we played due to the pitch conditions, we know that there’s room for improvement there.” Karim Onisiwo led the charge on the day, while also telling the team after the match that the result couldn’t be a one-time result. “Even if he didn’t score that goal, the way in which he worked hard right until the end, that’s what we want,” Beierlorzer said about Onisiwo’s performance. “The message is: that’s what we want to see from everyone. We need points, which is why this is the only proven way to get the fans on our side,” said Beierlorzer. “Our fans are truly amazing, which is why we need to have them on our side. They respect this manner of playing, when you win those types of challenges. The fans were backing us and it was great.”

Fortuna Düsseldorf currently sit in the relegation zone, and are four points back of Mainz. The chance is there for the Zerofivers to distance themselves from their opponents. In terms of how the match could proceed, it will likely be a bit different than it was in the reverse fixture. “Düsseldorf follow a different playing philosophy, they also have different players.  The challenge is slightly different. We still need to look at how we will approach it,” said Baierlorzer. “The way each player will approach this match – let’s call it their mentality – will need to be the same as it was against Paderborn. Giving it your all, bringing a desire to win to the table and building on last weekend’s win. That’s our goal.”