Lichte: Hard work in training with different focal points in order to get the win in Augsburg 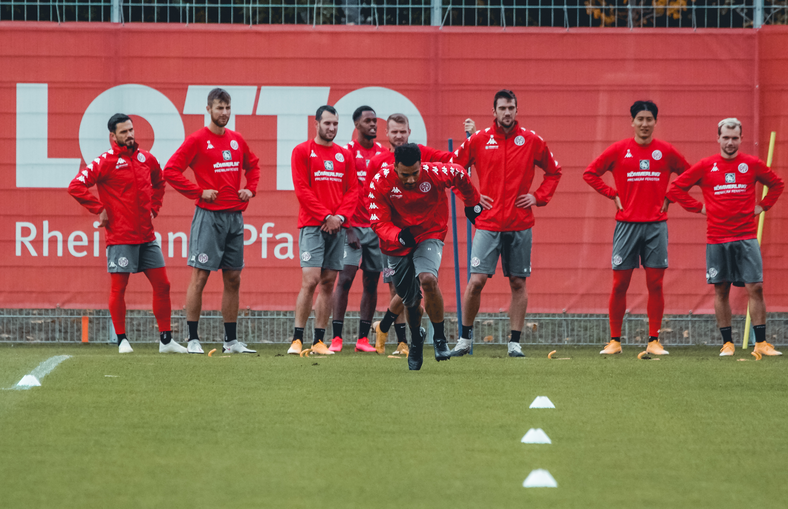 The disappointing defeat against Borussia Mönchengladbach has been put in the past, now the Mainz 05 players will try again to pick up their first points in the Bundesliga this season. "We have to show in training every day that we are doing all we can to turn the tide," explained Jan Moritz Lichte after the first training session of the new week.

In his media round, the head coach talked about the topics that will arise in this week's training sessions. He discussed what needs to be done in general to eliminate existing problems and what the current priorities are with regard to the away game on Saturday at FC Augsburg, where the first points could finally be achieved. "Switching from attack to defence and pressing the opponent to win the ball back. Especially the offensive switching after winning it back," explained Lichte. "This is an important factor for us, we are currently in the process of developing, that's how I would put it. The analysis has shown very positive figures for us. Winning the ball in the opposing half had already been good against Leverkusen, but against Gladbach there was a further increase.

Set pieces on the schedule

The game against Marco Rose's team was decided in the end by a header from a corner, while our own corners hardly posed any danger, the training schedule also includes working on set pieces: "We have to keep at it. Defensively as well as offensively. In the last three games we have conceded set-piece goals and Augsburg is a team with large players and normally good set-pieces. We will do this even more during the week to ensure we are sharp when it comes to these situations," said Lichte.

The game-winning moment came when national player Matthias Ginter headed home unmarked from a corner to earn a 3-2 victory. "We have to hand over our opponents better when one of their players is only trying to block our defender so that another attacker can get a free header," repeated the Mainz coach. If Ginter takes a running start, he is difficult to defend. "With more body contact, however, we would make it more difficult for him to score in that position.”

There were two big things that could have proved decisive in ensuring that at least one point was not lost after the two Mateta goals gave the team a 2-1 lead: That Mainz did not score enough goals from their good attacking play. "We had several chances to score more than two goals," said Lichte. Then came the situation that led to the 2-2 draw. Moussa Niakhaté bounced the ball on to his upper arm while trying to defend. What was discussed even more than the questionable penalty kick, Niakhaté's misplaced pass, which had made the counter-attack of Gladbach possible in the first place.

"We have analyzed this," said the Mainz coach. "That was a pass that you can play like that in general. It wasn't necessarily the pass that was bad, the recipient of the pass may have been a bit too late. But the decisive factor was that we were not in a good position to make the pass. We had the opportunity to create a goalscoring opportunity for ourselves after Jeremiah St. Juste's excellent run across the entire pitch. We lose the ball, we recover and win the ball back and then we are not yet back in the shape we should be in when the game is set up properly. The result: we are outnumbered by one. "We have to see that, we have to be careful. We are not in formation to make such a pass. As a passing player, it would be better to play the ball across the back for a long time."

The weaknesses have been recognized and are being worked on in tough training sessions. At the start on Tuesday, 27 fit players stood on the practice pitch. "They all dig in, they all put their foot down", emphasized Lichte. "They want to throw everything into the ring to show that we can play football successfully."