"NEVERTHELESS, I AM PROUD OF THE BOYS".

Voices from Munich: A proud interim coach, a disappointed goalscorer & a debutant who will probably only be happy in the coming days 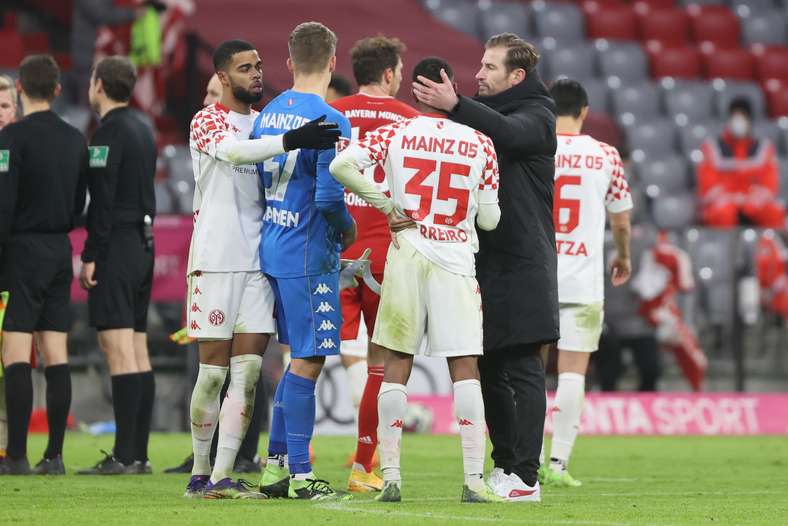 In the end, the lead at the break was not enough to make the sensation in Munich perfect from Mainz's point of view after 90 minutes. After the 5-2 defeat, however, it was not only interim coach Jan Siewert who was aware that he had at least given the team of his choice the tools they needed. The Zerofivers had "teased" the champions and, after captain Danny Latza had failed to take advantage of a great chance to make it 3-0, were presented with the receipt. After a performance that (Dahmen: "...one of the best halves this season") can and must be built on despite the tenth defeat of the season.

Mainz voices from the Allianz Arena

Interim coach Jan Siewert at the press conference: "It was an extremely intense game and we knew we needed a good plan to sell ourselves as well as possible here. I think we did that, especially in the first half, when we had a lot of moments where we came through the counter-pressing in depth with good balls. It was very unfortunate after the break that Bayern scored early because we could have made it 3-0 before. In the end, you can see the quality of Bayern Munich. Also because we irritated them before the break. Still, I'm proud of the boys and hope they reward themselves in the coming weeks."

A dream has come true

Bundesliga debutant Finn Dahmen: "It was a huge thing and I was very excited. Of course, the result clouds the joy a bit. But it will be different tomorrow or the day after. I only found out for good at 2pm today that I was playing. Maybe that was good, because I could sleep better last night. It was a dream come true because I've been watching the Bundesliga since I was a little boy. We played one of the best halves this season, everyone pushed themselves, everyone gave their all. Then we had a great chance to make it 3-0, when unfortunately Neuer made a huge save. Then Bayern went into a frenzy that we couldn't defend against and unfortunately it happened the way it did."

Scorer Jonathan Burkardt: "It was a very good first half. When you go into the break with a two-goal lead, you must have done a lot right in Munich. But then we lost our way, Munich had a better division of space and we had too much space between the back four, and conceded five in the second half. After taking the lead, it's extremely disappointing to lose so badly. Overall, it was an improvement in performance and not the opponent we need to get our points against. We look ahead and have a very important game next week against Eintracht."