Bo Svensson signs contract until 2023 & completes the sporting management trio - Heidel: "We want to start a new project together". 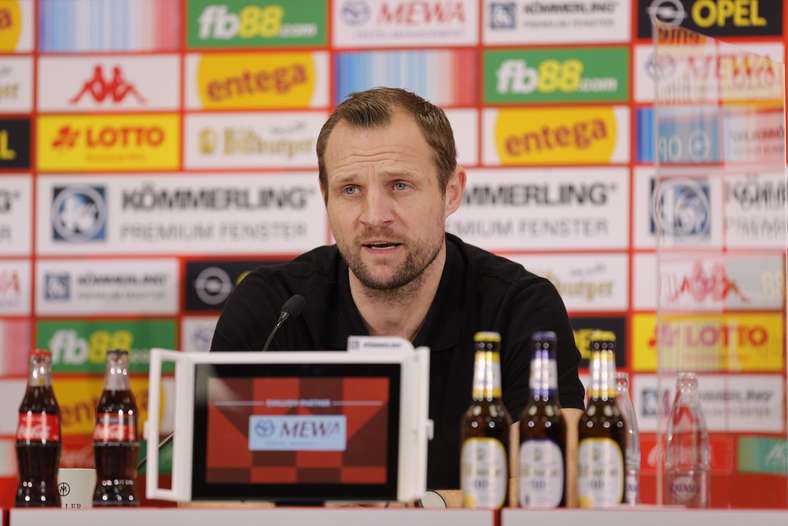 Almost exactly one week after the official presentation of the two returnees Christian Heidel and Martin Schmidt shortly after Christmas, the new Mainz head coach Bo Svensson completes the sporting management level at Mainz. It did not take long to find the new "most important person at the club", as Heidel calls the coach. "Up here (editor's note: on the podium in the press conference room at the OPEL ARENA) today sit almost 50 years of Mainz experience," emphasised the new board member for Strategy, Sport & Communications. But "we didn't get Bo because he was here before. Quality is above all. We want to start a new project together." This is also underpinned by the contract length of 3.5 years until the summer of 2023.

Many fans must have felt nostalgic on Tuesday afternoon because of the personnel line-up at this press conference. Heidel, Schmidt and Svensson are now in charge of keeping Mainz in the league in the short term, but at the same time they want to put the club on a solid footing for the long term, as the new head coach emphasises. "I wouldn't be the right man to stay in the league for a short time, but I wouldn't be here either if I wasn't totally convinced that I could keep us in the league," says Svensson. Nevertheless, he said, it is always important in Mainz to talk about perspectives and not to lose sight of the medium to long-term strategy. "Only talking about the next few months does not correspond to my ideas. We have a common idea and a vision. It's about putting Mainz 05 on pillars that the fans and we can identify with. Something that we can say: 'This is 100 per cent Mainz 05'."

After all, what has always distinguished Mainz is well known to the 41-year-old Dane after his experience in seven years as a player and five successful years as a coach, first as Kasper Hjulmand's and Martin Schmidt's assistant in the Bundesliga, and then as coach of the U16, U17 and U19 of the Zerofivers. In addition, he now has one and a half years of experience at FC Liefering in the second Austrian league, from where he also brings his long-time assistant Babak Keyhanfar back to Bruchweg. Together with Patrick Kaniuth and goalkeeping coach Stephan Kuhnert, they form the coaching team, which will be supported by the two video analysts Daniel Fischer and Tijan Njie. Michael Falkenmayer will be released from his duties for the time being. Talks with him, as well as with Jan-Moritz Lichte, will take place in the coming weeks about a possible further cooperation.

The fact that Svensson is happy about the opportunity he has been given and was immediately eager to take on the new task is something you can see in his face on Tuesday. It's a matter of the heart, and in this respect another thing he has in common with Heidel and Schmidt. "It is a special decision for me. I spent most of my life in two places - in Copenhagen and with my family in Mainz for 13 years. Not only football, but also the city has a special meaning, my youngest son was born here, my children go to school here. All that has played a big role, but not only that," the former central defender emphasised, citing other aspects that had reinforced his conviction for this project: "My opinion is that here, as a coach, you have the freedom to develop. It is clear what is required of you, but at the same time you have the opportunity to create your own philosophy. Every coach can stay true to himself here and gets the trust of the club."

The boundless support for our coach is important

An assessment that Heidel also shared with a view to the past, when he recalled Jürgen Klopp or Thomas Tuchel, who for their part had been installed without Bundesliga experience, but more out of one hundred percent conviction. Jürgen Klopp, Heidel stressed, had recently emphasised in an interview that Mainz 05 had given him the chance to become Jürgen Klopp as a coach. In other words: to develop his own style with the team on and off the pitch. "Nobody talked him into it and Bo also knows a lot more about football than I do. The boundless support for our coach is important and we will support him. At some point, Bo will hopefully also be able to say: 'I was able to become Bo Svensson here. And also stay.'"

Who the long-standing leader and popular figure in the Mainz jersey is, is probably known to large parts of the supporters. On Tuesday, he described what he stands for as a coach and what he wants to stand for as follows: "I stand for the Mainz virtues: That starts with playing against the ball, it's about performing as a team, having close spacing, putting the opponent under pressure from compactness and defending forward. I want us to switch quickly after winning the ball. And it's also absolutely clear that we want to play with intensity and dynamism." Not least the first half in Munich appealed to him in this respect and included many elements. Here, too, the new coach on the sidelines is on the same wavelength as the board: "We prefer a certain kind of football, with passion, courage and power. That's what distinguished us at the beginning of our Bundesliga days." True, football has changed, of course. "But we want to play Mainz football with the clear goal of also being in the Bundesliga in 2021/22." Heidel emphasised once again that the goal of staying in the Bundesliga has by no means been written off at Bruchweg, but that the fight should really begin now.

Via a short diversion to Liefering, Svensson is now back with Mainz 05 and also with his family, with whom he had made the decision at the end of his playing career to keep the centre of his life on the Rhine. "But I had no plan in my life, neither as a player nor as a coach, where I want to be in this or that year. I follow my instinct, that's how I've always handled it with important decisions in my life. It always had to be a feeling for me that it was a "match"," Svensson said. A "match", in other words, a perfect combination that should contribute to being able to offer first-class, 05-style football in the OPEL ARENA beyond the current season. The foundation has been laid, and on Tuesday afternoon Svensson will lead the first training session. He then has four more to prepare for the clash with Eintracht Frankfurt on Saturday afternoon. His expectations are clear: "In Mainz, there was never a guarantee of results. But there has to be a performance guarantee. And that will be enforced firmly and consistently!"