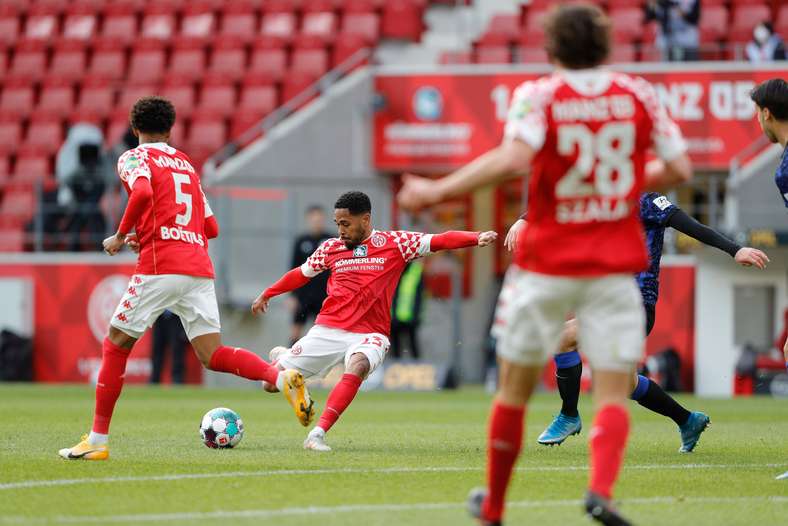 Mainz 05 held Hertha BSC at a distance (two games in hand, eight points less) in a 1-1 draw at the OPEL ARENA on Monday evening. Phillipp Mwene had countered the Berlin lead out of nowhere by scoring a dream goal before the end of the second half - at a time when the Mainz side had long deserved a clear lead in view of several top-class opportunities. Because the second half was much less promising than the first 45 minutes, the visitors took a not entirely undeserved point back to the capital.

Zerofivers with a powerful start

The home side had the first chance of the match: After a corner by Mwene, Bell got the ball from ten metres, but put the ball a good 20 centimetres over Hertha keeper Alexander Schwolow's goal (5'). And Mainz were to dominate the opening phase as well. Boëtius had a double chance only a short time later when he first failed after a throw-in from the left and then from an acute angle (7', Schwolow saved - 8', crossbar). Less than 60 seconds later, the Hertha goalkeeper saved a Kohr volley (9'). A Mainz lead would have been more than deserved after ten minutes. The first chance for the visitors came from Niklas Stark, the Berlin captain, who headed too high after a corner, completely free (13'). After a break of more than three weeks, Hertha still had problems to keep up with the pace of play and the passing of the hosts and were lucky again a little later: After a fantastic pass from Leandro Barreiro, Szalai appeared free in front of Schwolow, tried to chip in from ten metres, but failed to beat the goalkeeper's fingertips (20').

After a period of inactivity which gave the visitors time to breathe, Matheus Cunha went down after half an hour - preceded by a duel with Bell - neither for the first nor the last time and referee Sascha Stegemann ruled for a free-kick. As a result, Tousart, who had been left alone, got his head to the ball and beat Robin Zentner from eight metres to give Berlin the lead (36'). Bitter after the course of the first half so far. But Mainz had the appropriate answer ready - and what an answer it was! Mwene caught a rebound in front of the penalty area, put the ball in front of him and finished superbly to quickly equalise (40'). It was also the Austrian's his first goal in the top flight! And Mainz wanted more. Shortly afterwards, Barreiro did not get a cross from Moussa Niakhaté right, so Schwolow prevented Mainz from taking a deserved lead at the break (41'). The draw for the Berliners going into the break was therefore extremely flattering.

Less eventful after the change of sides

The Zerofivers came back onto the field unchanged. But it took a while after the restart before anything happened. The first opportunity came from Mainz, who were still visually superior. After another corner by Mwene, Jeremiah St. Juste put the ball on the far corner, but Schwolow made a safe save because the centre-back had not put enough pressure behind the ball (60'). Only a little later, Karim Onisiwo was able to get through on the right side of the penalty area, but failed from an acute angle, also due to a reflex save by the Berlin keeper (62'). The visitors' first chance after the restart came three minutes later from Cunha, whose shot was tipped around the post by Zentner (65').

The second 45 minutes were much less eventful than the first half, but it was still exciting. In minute 72, Svensson reacted for the second time and brought on Robert Glatzel for Szalai. But while the Mainz team did not manage much offensively at first, they had to take a deep breath in the 82nd minute after a Berlin counter-attack. Santiago Ascacibar crossed for Krzysztof Piatek, who, fortunately for the Zerofivers, was unable to put the cross into the net from a few metres. The Zerofivers reacted once again and brought on fresh players in Quaison, Latza and Brosinski, but nothing more than a point was possible. In stoppage time, Mainz had a sniff of victory when Niakhaté failed to beat Schwolow from eleven metres after a corner kick (90+1') and Glatzel put a Brosinski cross past the post (90+2'), but the OPEL ARENA was closed a little later.

After 31 games and before the Rhine-Main derby with Eintracht Frankfurt on Sunday afternoon (3.30pm CET), the Zerofivers have 35 points to their name thanks to the draw against Berlin. And even though they missed out on the big break against Hertha, Mainz still have more than justified hopes of staying in the Bundesliga.