Mwene back in action and ready for more

The Austrian fullback made his comeback after almost 500 days out through injury. His comeback is a reward to his perseverance and determination. 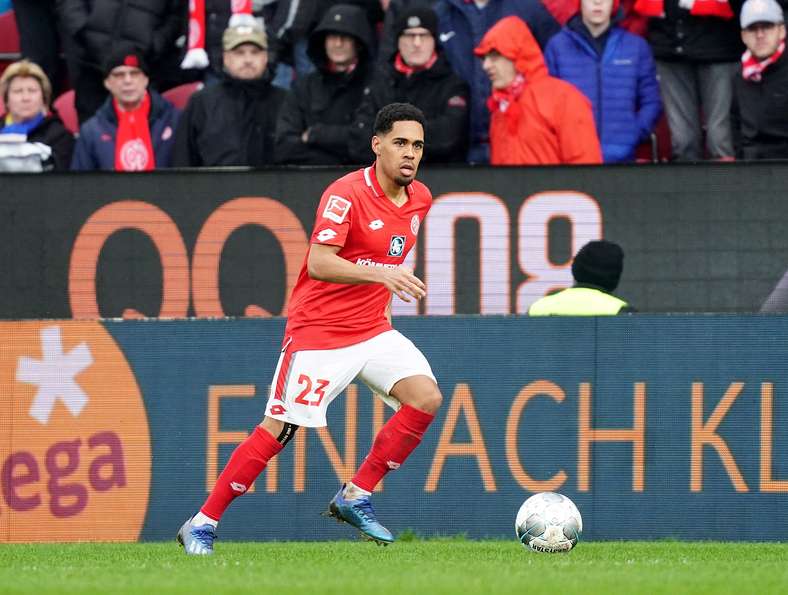 Mwene put in a stellar performance against Fortuna.

The 3-0 win at home against Paderborn was only FSV’s third clean sheet of the current Bundesliga season. Philipp Mwene made just his third competitive home appearance for the Zerofivers, with Mainz never having conceded with the Austrian on the pitch. Mwene’s comeback made a good day even better for Mainz 05, who were able to celebrate a much-needed victory over a direct rival in the relegation battle. “It was just the first step, a necessary win,” Mwene knows that this win must not just be a flash in the pan.

The Zerofivers have had to wait 90 days, since the start of December, for a win in the OPEL ARENA. After six attempts, Mainz finally managed to reward the home fans with a win, this time against SC Paderborn. After the final whistle blew, the beloved carnival hit “Olé, olé fiesta” was sung loud and proud by the home crowd. It was a convincing outing for the men in red, who will hope to add to this against Düsseldorf this weekend. But three months pale in comparison to 476 days. This was the exact amount of time that Mwene had to be patient for his long-awaited return to the first team. Persisting issues with his patellar tendon led to operation after operation and kept the versatile defender out for 15 months. He has been working hard, and thus made an unexpected comeback last Saturday. “During the week before the game, I was training at the left-back position, and the gaffer wanted to know whether I could play there,” explained the 26-year-old, who is a right back by trade. “I said ‘of course’, I played there as a kid. I played there with the regular starters in our last training session before the game, but didn’t think too much of it. I found out on Saturday morning before the game. I was really excited, and also a little nervous. But I think that after 10 or 15 minutes of getting used to the game, I actually did well.”

Thrown in at the deep end

Finally back in amongst it rather than being a peripheral figure: Mwene gave a good account of himself, nullifying the threat provided by Paderborn’s top scorer Kai Pröger. The Austrian kept up this solid defensive performance over the whole 90 minutes. Only Ridle Baku had more touches of the ball than Mwene (68), and his 11.97km covered was only topped by Leandro Barreiro. The Viennese native was also in the top three when it comes to completed sprints (29); only Baku and Karim Onisiwo completed more. “I’ve always been good when it comes to fitness. But obviously playing a match is a different challenge.” He went on to say that the plan had been to regain some match sharpness while playing with the under 23s, but that didn’t pan out. “I was thrown in at the deep end and didn’t think about it a lot. I ran as far as my legs would carry me.” And they carried him all the way to the final whistle. The three points then were good reward for the huge amount of effort he put in.

“Won 2-0, celebrated with the fans, perfect”

In his other two home appearances, against Wolfsburg and Hertha BSC in autumn 2018, FSV kept two clean sheets; they also didn’t manage to score in these two games either. So for Mwene, winning in red is a completely new feeling; “the atmosphere after the game was amazing. I couldn’t have imagined a better comeback. Won 2-0, celebrated with the fans, perfect. It was a party. We want a repeat performance against Düsseldorf and to celebrate with the fans again.”

“Ready to be a part of the team again”

Before attentions turn completely to next Saturday’s fixture, Mwene first will go over the events of last weekend. Especially his successful return to the pitch, which for so long had been a distant dream. “A weight was lifted from my heart. I just can’t put it into words. It was a long and demanding period. I think I’ve grown a lot as a result, know my body better and can work on my game. During rehab and gym work, I improved my running style. I’m ready to be a part of the team again.” The Austrian is now looking to make back-to-back appearances with Mainz and play against Fortuna.