MÜLLER: "We were too passive”

All the post-match quotes from Mainz' crushing 5-0 defeat at the hands of RB Leipzig on Sunday. 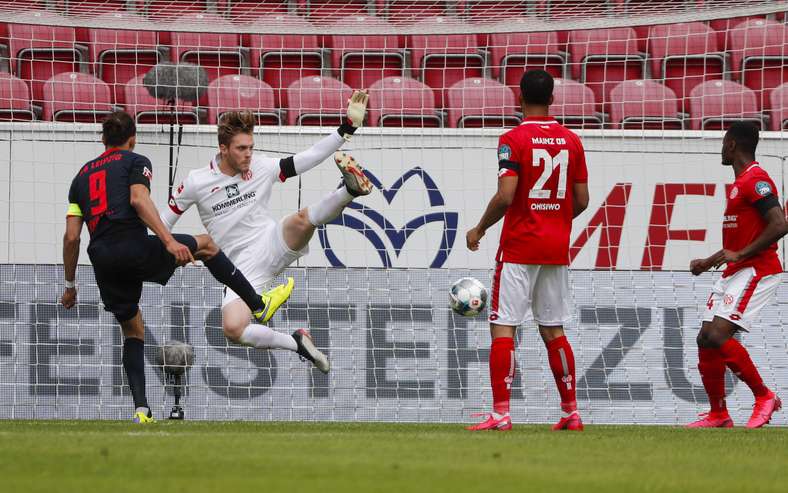 Leipzig could have had even more goals were it not for the heroic saves of Florian Muller.

RB Leipzig took a deserved three points from the OPEL ARENA on Sunday as they beat Mainz 5-0. In addition to the high class of opposition, the Zerofivers also made multiple mistakes that contributed to their defeat. The full post-match quotes are below.

Quotes from the coach, sporting director & the team

Achim Beierlorzer: "It was an extremely disappointing game today. We went with three centre backs to avoid goals like the first two - nobody picked up their men. We played against a really good team, but we never found a way of being a threat to Leipzig. They pressed us very aggressively and that got to us somewhat. We weren't able to do what we wanted to and it wasn't an even game."

Rouven Schröder: "We deserved to lose heavily and it could even have been even heavier. The result reflects the match. We conceded the first goal way too early as we defended them poorly out wide. Our defenders were too far away from their men in the box for the second one. We lost to a top side today, but we shouldn't have made it so easy for them to break us down - we made too many individual mistakes which helped them. We need to process this and be honest with ourselves. One positive is that our next game against Union is in three days, and they are close to us in the table. We want to win that game."

Flo Müller: "We can be thankful that Leipzig didn't take all their chances, otherwise they would've scored double digits. We gave them way too much space when they counter-attacked. That's not what we should be doing. We were too passive and did not get into the duels."

If you can lose like this, the next game can only go better

Jeremiah St. Juste: “We conceded the goals far too easily, we covered the players badly and made a lot of little errors. It’s difficult to come back after going three goals down. It could have gotten even worse near the end. If you can lose like this, the net game can only go better. We have to pull ourselves together and look to the next game.”

Karim Onisiwo: "We knew what we were in for, but we didn't mark them tightly enough. It was difficult to score goals at the front because we could hardly move up."