The Zerofivers were 3-0 down and suffered their third loss in three games in the Rückrunde, though St. Juste did score for the hosts 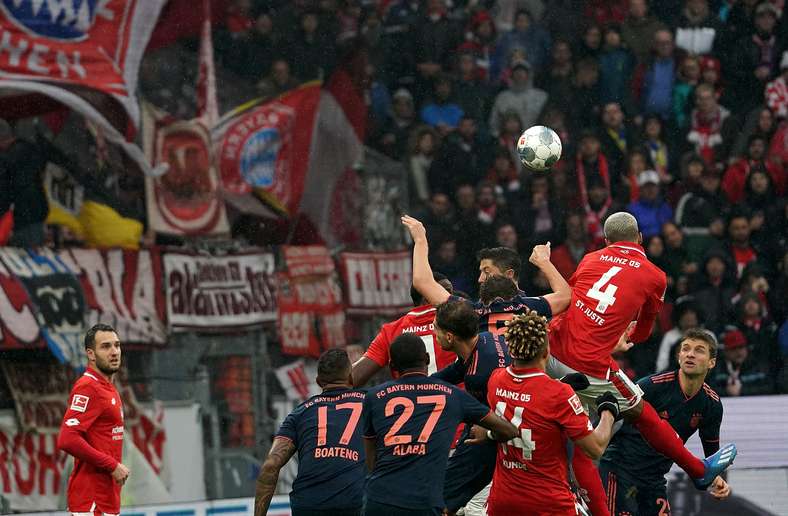 St. Juste scored a consolation for the hosts.

1. FSV Mainz 05 were forced to admit defeat against Bayern Munich on Saturday afternoon following a 3-1 home loss. The second-placed guests took advantage of their hosts’ wastefulness in the first half to score three goals in the first 26 minutes through Robert Lewandowski, Thomas Müller and Thiago. The home side, who after conceding the three goals began to cause their opponents problems, scored late in the first half through Jeremiah St. Juste’s header, though a comeback win did not materialise and the Dutchman’s goal served only as a consolation.

The first notable chance in the OPEL ARENA came in the 5th minute, where 33,305 spectators watched Leon Goretzka fire an effort wide of the left post. Only 2 minutes later there was a chance for the Zerofivers as a header from St. Juste went only centimetres over the bar (6’). Shortly later, much too early and even more easily, the visitors took the lead. Benjamin Pavard put in a cross from the right and found the head of Robert Lewandowski, who powered an effort past Robin Zentner in the goal from inside the six-yard box (8’). Only six minutes later, Bayern doubled their lead through Müller. A ball came over to Lewandowski, who was tackled by Zentner, but it was not cleared properly and a cross from Leon Goretzka came to the sliding Thomas Müller, who fired it in (14’).

The visitors continued to attack, but the hosts did their best chance in the game so far through Barreiro, as he volleyed Ridle Baku’s cross into the base of Manuel Neuer’s near post. Only a minute later some neat interplay between Niakhate, Öztunali and Ridle Baku unfortunately led to nothing tangible (23’). All Zerofiver attempts to score ultimately meant little, as Thiago danced through the penalty area to bury an effort in the back of the net, for his first and Bayern’s third of the night (26’). In the 32nd minute, Beierlorzer decided to shuffle the deck, and brought on Danny Latza in place of Kunde. Before the end of the half Öztunali had a chance in Neuer’s box, but was unable to find the target. In added time before the break, St. Juste headed an effort from a corner into the net which took a deflection off Goretzka, to reduce the arrears to 3-1 (45+1).

Courageous FSV unable to add to their tally.

The Zerofivers took the momentum of their late goal into the second half. In the 52nd minute, Öztunali made a solo run, but was unable to pass to Robin Quaison at the right moment. The next cross from Brosinski also missed Mateta. The fans approved of the strong opening phase and begun to improve the atmosphere in the stadium. Bayern managed to regain possession, but each time Mainz tackled the Bayern Players and regained control. After a strong fifteen minutes, Brosinski attempted to catch Neuer out with an effort from distance, but the keeper was equal to it (63’).

At the beginning of the closing stages the manager signalled for Onisiwo to come on for Barreiro, as the team transitioned into going on the offensive (72’). At first, it looked as though Zentner would have to pick the ball out his net for a fourth time, but he was able to make a smart save from Philippe Coutinho’s effort (75’). Two minutes later, a brave tackle from Niakhate prevented Ivan Perisic from scoring a certain goal. However, Mainz had become much more aggressive and courageous, giving their opponents more space and focusing their efforts on goal. In the 78th minute, Szalai’s effort on goal required a brilliant Neuer save to keep it out. A Brosinski free kick ended up in the stands (82’) while Lewandowski’s latest effort at goal suffered the same fate (84’). However at this point the game was beyond the home side, and it showed. An overcooked cross from Onisiwo failed to find the leaping Danny Latza, and a late corner found an unmarked Robin Quiason in the box, only for him to smash the ball into the crossbar (90’). A little later and the defeat was confirmed as Mainz lost their third game in 2020. Next weekend FSV will take on Hertha BSC at 15:30 CET.