Mateta's equaliser too little, too late

Mainz lose to Freiburg in their first match of 2020. 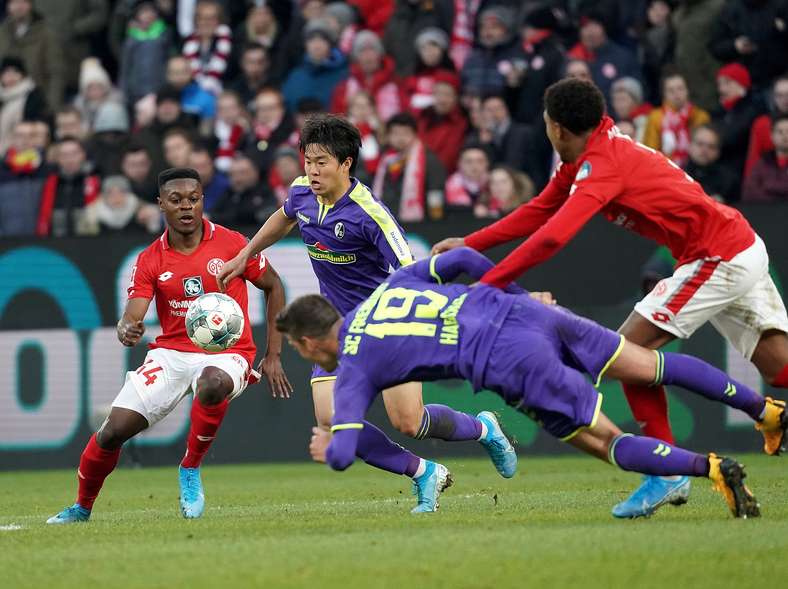 Kwon opened the scoring for Freiburg.

Despite starting well and creating the better chances over the 90 minutes, the Zerofivers suffered defeat to SC Freiburg in their first game of the Rückrunde, losing 2-1 in the OPEL ARENA. Changhoon Kwon and Nils Petersen scored for the Breisgau club and Mateta replied with one for the home side.

Achim Beierlorzer chose the same 4-2-3-1 formation that he had trialed throughout the winter break. Robin Zentner started in goal, with Ronaël Pierre-Gabriel, Moussa Niakhaté, Alexander Hack and Aarón Martín ahead of him. Pierre Kunde and Ridle Baku provided the midfield axis, and Robin Quaison, Jean-Paul Boëtius and Levin Öztunali made up the three attackers to sit in behind the striker, Jean-Philippe Mateta.

Freiburg stopper Alexander Schwolow was called into action early as he was forced into a save by Öztunali after just two minutes. A corner followed, and Alexander Hack’s header was cleared off the line (4’). Then it was the guests’ turn to threaten, Changhoon Kwon’s shot flew just inches wide of the right-hand upright (7’). After a period with very little action, the game sprang into life as Schwolow denied Baku, who fired from distance (18’). After another Mainz corner, Aarón’s corner found Mateta, whose header went wide (19’). Freiburg showed their ruthlessness in front of goal; Petersen fed Kwon and the Korean finished calmly to make it 1-0 (27’). The Zerofivers looked to hit back instantly, but Mateta just couldn't get on the end of Quaison's low driven cross 28’).

FSV weren’t put off by these set-backs and kept pushing. Niakhaté almost brought it level with a free header from Pierre Kunde's ball in, but again Schwolow kept it out (38’). Then, disaster. Mainz lost the ball and Freiburg scored a second. Christian Günter played Manuel Gulde through on goal, his shot was blocked by Niakhaté, but only as far as Nils Petersen, who finished calmly (41’). The teams went into half time with the score at 2-0.

The Zerofivers were wasteful

Beierlorzer reacted early, making a change at half time. Karim Onisiwo replaced Baku. Mainz began the second half on the front foot as well, but didn’t create any noteworthy chances in the first few minutes of the half. The game reignited in the 57th minute, however, as Kwon saw his double attempt cleared off the line by Pierre-Gabriel and then saved by Zentner. Mainz’ first real chance of the second half fell to Quaison, whose shot from distance was well wide (61’). The Swede came closer moments later, but Schwolow was equaled to his curled effort.

Beierlorzer made positive changes in the final phase of the match, bringing on Daniel Brosinksi and Ádám Szalai for Gabriel and Öztunali. Mainz got on back through Mateta, whose headed effort from Kunde’s freekick looped over Schwolow and into the top corner (83’). However, it was too little, too late, and Mainz couldn’t manage to grab the equaliser, no matter how hard they pushed.


Mainz 05 go into next Saturday’s (15:30 CET) away clash with Borussia Mönchengladbach on 18 points.