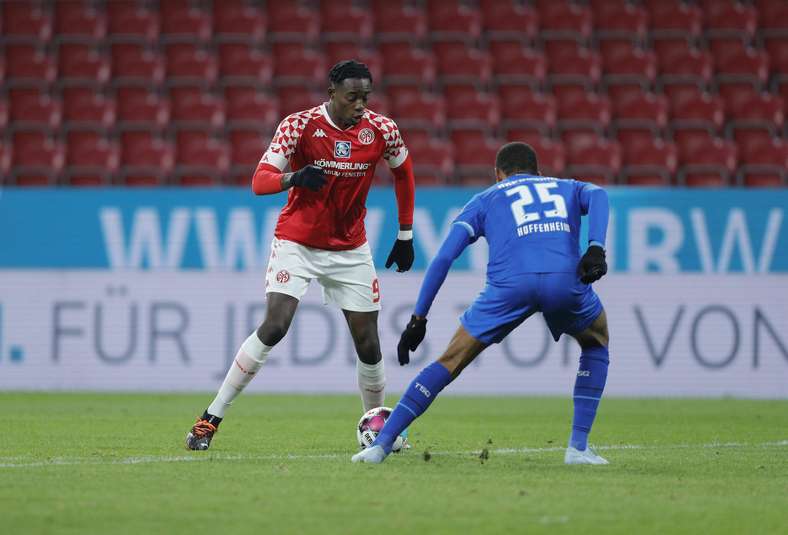 At the end of the Matchday on Sunday evening in the OPEL ARENA, Mainz 05 remained undefeated for the third time in a row against Hoffenheim. Despite Robin Quaison's goal before the break, they had to settle for one point at the end because Ihlas Bebou scored past Robin Zentner after an hour. In the final phase, in which the Zerofivers had an extra man after Dennis Geiger was sent off, the hosts tried everything once again, but the final result was still a draw which matched their performance. Mainz was unlucky in the 75th minute when Jean-Philippe Mateta hit the post.

Jan-Moritz Lichte made no changes and put his trust in the team that beat Freiburg. Captain Danny Latza was absent due to back problems and was again replaced by Moussa Niakhaté.

Hoffenheim had more of the game in the early minutes, but the first goal was scored by the home side. Through Edimilson Fernandes, the ball went to Jean-Paul Boëtius, who passed it on to right-back Levin Öztunali, but Adams cleared the cross (5'). The next attack worth mentioning was also the work of the red and whites a little later. A deflected cross from Daniel Brosinski found Mateta, but the goalkeeper Oliver Baumann saved his header (8'). And while the visitors played along pleasingly, Mainz worked their way through this initial phase to create the next chances. Boëtius had his shot saved after initial work by Öztunali and Fernandes from an acute angle (13'), only a minute later Mateta's effort was too high after a corner (14'). However, the first Hoffenheim opportunity in minute 20 was about to happen: After a free kick by Dennis Geiger, Stefan Posch got a free shot at the far post and forced Robin Zentner to a great save with his feet (20').

A similar picture followed soon after. The Kraichgau team had more ball possession, but rarely found gaps in the Zerofivers packed defence, which also swarmed out at lightning speed after winning the ball and finally rewarded itself after a good half hour having created the better opportunities. Mateta skilfully controlled a long ball, put a pass into the path of Boëtius, whose cross Quaison finished off from close range to take the lead - 1-0 (33')! It was a well-deserved lead that would last until the half-time whistle, thanks to Zentner who saved from Ihlas Bebou, who headed freely towards him, and prevented the equaliser by head (45.+2').

The second half, which both teams started unchanged, began much more restrained than the first. The Zerofivers initially focused on clean defensive work and looking for the next opportunity to counter, while the visitors kept getting stuck in the half of the hosts and only rarely came to positive conclusions. An attempt by Robert Skov, who had just come on after 57 minutes, presented Zentner with no problems whatsoever, while a shot from Bebou landed well over the bar (60th). But the Hoffenheim attacker finally scored the equaliser with his next opportunity, when he converted Ryan Sessegnon's cross. Zentner had no chance (62'). It was an equaliser that was coming after the restart. The game was again completely open and only three minutes later Jeremiah St. Juste had a great opportunity to put his team back in the lead after a corner. But his shot was blocked on the way into the goal, Baumann then secured the ball (65').

With 15 minutes to play, Jonathan Burkardt came on for Öztunali. Mainz had another big chance to make it 2-1. Quaison had sent Mateta over to the right, the Frenchman's effort was agonisingly close but could only find the post (75'). Five minutes later the guests were down to ten, when Mainz sub Karim Onisiwo was foulded and Geiger saw red (80') The final phase belonged to Mainz, which waited in vain for clear scoring chances and did not want to take too much of a risk. Baumann defused a deflected Burkardt cross in the 89th minute just before the line. After a corner, St. Juste again couldn't score due to a defensive block. Fighting was now the trump card in these final minutes, in which the visitors threw themselves into every Mainz attack. And so it remained 1-1, even after the four-minute stoppage time had elapsed, as a result of which the Mainz team has now collected five points from the last three games. Next Saturday afternoon (15.30 CET) Mainz will face Arminia Bielefeld.