Mateta: “My composure is coming back”

Jean-Philippe Mateta scored the Zerofivers’ first goal of the year but missed a big chance. Zentner calls for better concentration at the back. 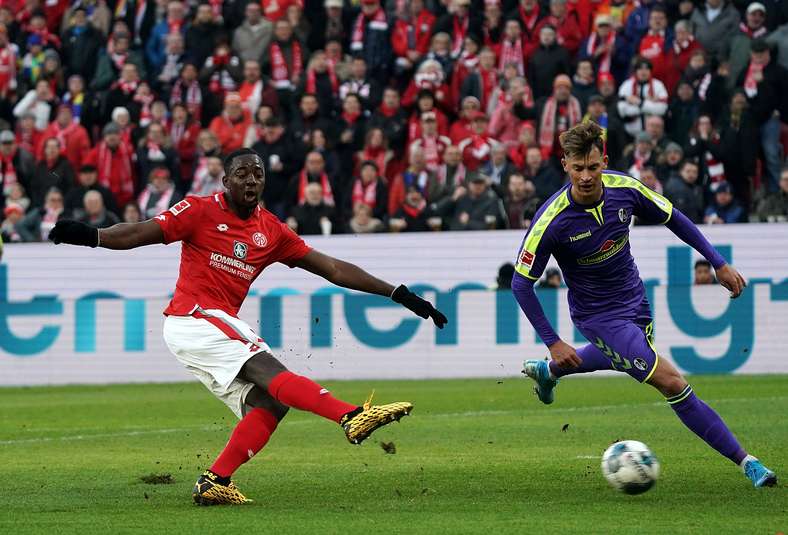 Mateta is confident that he will put away chances like these in the future.

1. FSV Mainz 05 started the New Year in the same fashion as they ended the last – with a disappointing result. After the team’s 1-0 loss to Bayer Leverkusen, they suffered another defeat at home. For the first time in their Bundesliga history, SC Freiburg took three points away from Mainz. Head coach Christian Streich said that his team’s 2-1 win was a fair result.

Achim Beierlorzer’s men may see it differently. “Of course, it was frustrating for us,” says Robin Zentner. The Mainz goalkeeper conceded two goals that could have been prevented in the build-up but pulled off a spectacular save to stop the opposition from scoring again. However, he could only watch on as his teammates in front of him missed a number of chances to level things up.

“We came back from our training camp feeling good and we played well for large parts of the game, so it’s tough to take when you miss chances and concede twice in one half after giving the ball away,” continues Zentner. “We wanted to make amends in the second half but we were unable to do so because we were over-complicating it. We kept trying to force it through the middle and it was too crowded.”

According to the keeper, the Zerofivers should have attacked down the wings more in the second half, especially with Jean-Philippe Mateta, Ádám Szalai and Karim Onisiwo, three tall forwards, all playing. “We should have tried to cross it into the box more.”

Indeed, Mateta’s goal came from a free-kick that was whipped into the penalty area. Onisiwo’s resulting header was blocked and Mateta nodded home the rebound. His excitement at scoring showed that he was confident his team would grab another. “I believed we would score again,” says the 22-year-old. However, even Onisiwo’s big chance just before full time did not result in an equalising goal. Despite having more chances, Mainz dropped the points, which was also the case against Leverkusen.

Reacting to losing the ball

The big question is what would have happened if Mateta had taken his chance to open the scoring shortly before Kwon did for Freiburg. Jean-Paul Boëtius found the striker in the area but his effort was kept out by the foot of Alexander Schwolow. “I need to take another look at it,” says the Frenchman. “I think my shot was too central but the keeper still did well.” Mateta was also just unable to stretch out a foot to meet Robin Quaison’s cross moments after Freiburg’s first goal went in. Nevertheless, Mateta is confident that he will soon start putting chances like that away: “You know me. My composure is coming back.”

The Zerofivers’ keeper was more focused on the defensive aspect of the game. “We need to keep our concentration at the back and keep more clean sheets. It has to change,” says Zentner, who was less concerned by the fact the ball was given away before conceding and more concerned with his team’s response to losing it. “Losing possession is bound to happen. If you play it safe with your passes, you won’t give it away as often but you’ll miss out on chances to get the ball up the pitch quickly,” explains the 25-year-old. “What’s disappointing is that we didn’t recover the ball.”