Mateta is waiting for the green light

The mercurial Mainz attacker is back in training, and is as hungry as ever to be playing and scoring for the Zerofivers. 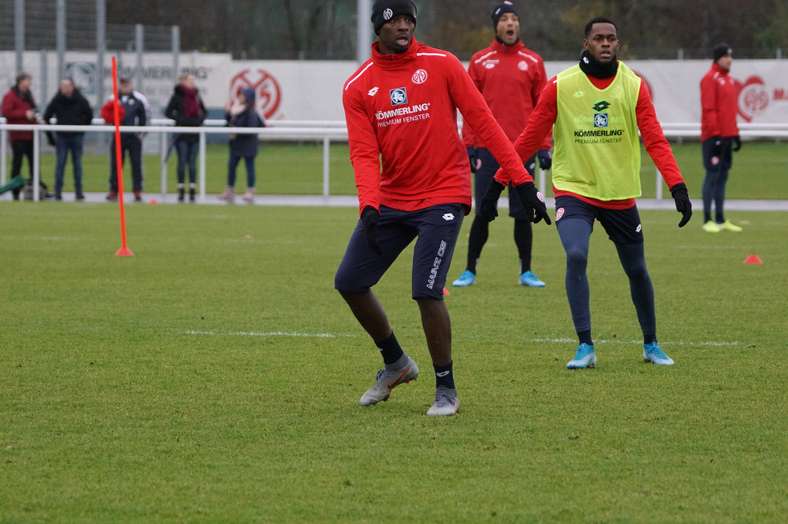 “Get it forward.” Those were the words of head coach Achim Beierlorzer on the training pitch at Bruchweg today. On the one hand, this was because forward-thinking football had been lacking during last Saturday’s outing in Augsburg. On the other hand, he may have been referencing a man up front, who Mainz have sorely missed in front of goal so far this season. Jean-Philippe Mateta has been mixing it up with his fellow pros so far this week; the Frenchman has been back in team training since the beginning of the week. Once the session had ended, Mateta gave his first interview since he got injured, and spoke about the progress he has made on his comeback and about new goals.

He appeared talkative, committed and in a good mood. The Mainz hitman’s first touches of the ball since he sustained a knee injury and was forced into a lengthy period away from the first team were of particular interest to all of the onlookers at Bruchweg.

JP opened the discussion non-verbally. Instead, he took out his phone and took a video of all those present. He explained that he wanted to send it to his family, almost a statement as if to say ‘I’m back!”

The Mainz striker said that his family had helped him a lot during recent months. He went on to say that his loved ones had been incredibly supportive, because this is the young star’s first major injury and rehab had been very tough for him mentally. Yet, according to Mateta, this long period away from the game enabled him to think about other things, things that are far from the football pitch. However, it is clear to see that the young man is burning with desire to be back out on the pitch, he desperately wants to add to the 14 goals that he scored last season in the red and white of Mainz 05. “When I was told how bad it would be, I set myself the goal of coming back stronger than ever before”, he explained. “Any other approach was out of the question. I feel good now and I’m ready to get back to the sport that I love.” And now, his goal is to score more goals than ever at the OPEL ARENA, as it should be for an ambitious 22-year-old.

Mateta said that before the start of his rehab process, he was asked whether he wanted to spend back in Paris or in his adopted home on the Rhine. “I decided to stay here in Mainz, with my team. It was a logical decision too; I didn’t want to come back to training like a ‘new’ player, I wanted to stay in touch. It was important to me that I could be present in the dressing room and at games.”  This decision has proved to be a smart one; he slotted right back into the squad. He has already scored his first goals in training and seems to be on the way back to regaining (at the very least) his old powers.

How soon, however, the player does not know. The fact that Beierlorzer will have to restrain the young mercurial talent is only logical. “JP came to me before training and said that he felt fully fit”, the Mainz 05 head coach said on Tuesday. Yet, he knows full well that he will have to protect the young player from himself. Again and again, he made the attacker to take a breather, and Mateta followed his head coach’s advice. He knows that taking precautions will do him a world of good, and that this protection represents his value to the team. There is no need to risk getting injured again! According to Beierlorzer, the aim is to have the striker ready for action at the start of 2020. “I am waiting for the green light from the medical staff and the coaching team”, said Mateta. He knows that it is not his decision to make and is being patient, even if this is difficult for him. The young Frenchman said that he has also got to know and appreciate his new head coach, due in large part to his outgoing and communicative nature. Though, he did admit that Sandro Schwarz’s departure had been tough for him. “We spoke on the phone and texted each other to say goodbye, because I wasn’t in Mainz when the decision was made.” Mateta will now play up top for Beierlorzer, if he had his way, it’d be in 2019! “The boss said I had to stay calm. He knows that I really want to play”, he said, still as hungry for goals as ever. It’ll be another difficult, but thankfully short, waiting period for Mateta. An end to the wait, a wait for his comeback and for renewed chats of his name from the stands, seems to be a little way off yet.