Mainz unfortunate to lose to Emmen

Two heavy deflections were the difference as Mainz lost 3-2 to FC Emmen in Estepona. 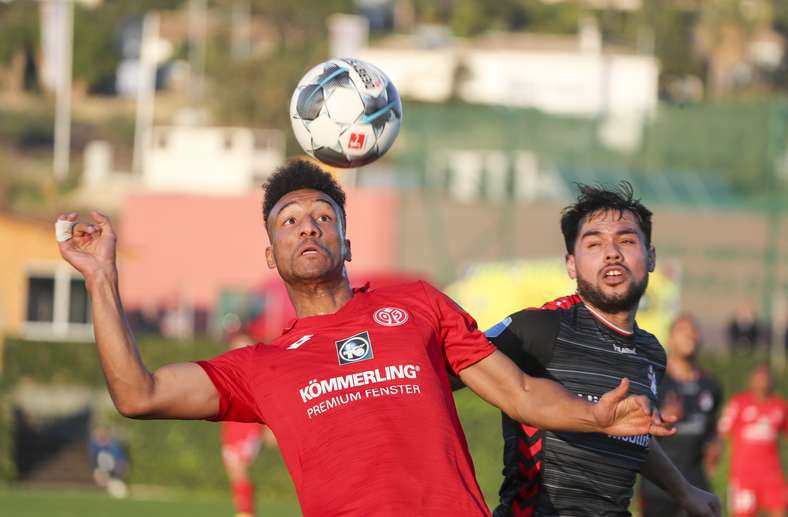 A decent second half performance from Onisiwo & Co was not enough for the win.

The Zerofivers suffered a close defeat in their first friendly of the year. ON the third day of the training camp in Estepona, Achim Beierlorzer’s team had to accept a 3-1 defeat at the hands of Eredivisie side FC Emmen. Adam Szalai and Jean-Paul Boëtius got on the scoresheet for Mainz.

Beierlorzer stuck with a 4-2-3-1 formation throughout the 90 minutes; Ronael Pierre-Gabriel, Ahmet Gürleyen, captain Moussa Niakhaté and Aarón started in front of goalkeeper Florian Müller. Kunde Malong and Alexandru Maxim were deployed in centre midfield, with an attacking trio of Dong-Won Ji, Jonathan Burkardt and Levin Öztunali ahead of them. Adam Szalai was the starting striker.

The Dutch side controlled proceeding in the opening portion of the match, using possession well and moving the ball quickly, but they couldn’t carve out any chances. Emmen looked certain to go in front after Michael de Leeuw was brought down by Pierre-Gabriel in the Mainz penalty area, but Florian Müller stood strong and denied Sergio Pena from the spot (17’). However, the Zerofivers’ keeper was powerless to stop Kolar’s shot from nestling in the back of the net (19’). FSV replied through Szalai, whose accurate shot rolled in the bottom left corner (35’). The score stood at 1-1 at the break.

Two deflections put Emmen on the road to victory

In the second half, Beierlorzer made wholesale changes. Finn Dahmen went in goal, with Phillipp Mwene, Jeremiah St. Juste, Alexander Hack and captain Daniel Brosinski making up the back line. Ridle Baku and Leandro Barreiro acted as a dual number 6 pairing in midfield. Ahead of them were Jean-Paul Boëtius, Robin Quaison and Karim Onisiwo. JP Mateta was up top to provide the goal threat.

The Zerofivers began the half in the ascendency and looked to be aggressive going forward and could have gone ahead through Onisiwo (49’). Despite their dominance, the Zerofivers found themselves behind against the run of play, this time through a heavily deflected Glenn Bijl freekick (65’). 120 seconds later, Boëtius brought Mainz level, volleying home Mwene’s cross. Deflections were to be the theme of the half, however, as the next attack saw Finn Dahmen remain powerless stop stop Luciano Slagveer’s shot (68’). The Zerofivers pushed hard to find a third equaliser, but it was not to be.