Ex Mainz player Florian Niederlechner sealed the game for the home side with a penalty after a harsh decision on a Kunde challenge. 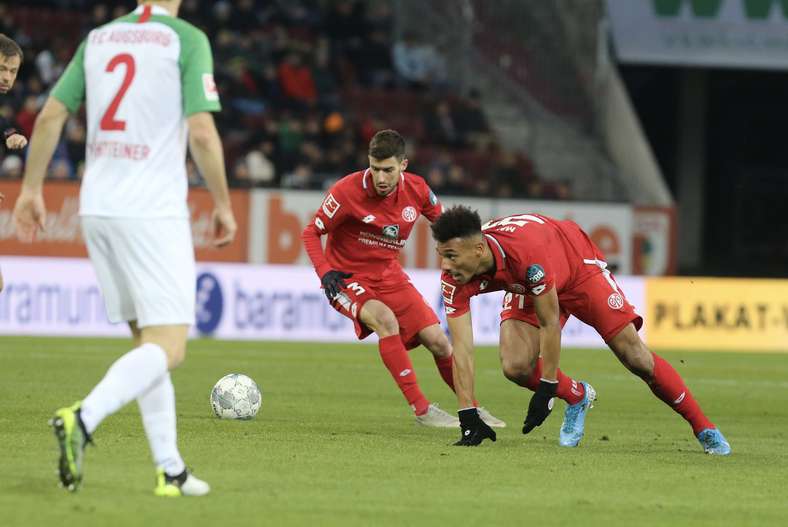 After two victories in as many games since he took over the team, Achim Beierlorzer finally suffered his first loss as coach on Saturday afternoon with a 2-1 defeat to Augsburg. Marco Richter levelled after Levin Öztunali opened the scoring for the visitors, before Florian Niederlechner won the game for Augsburg with a questionable penalty.

Head coach Achim Beierlorzer made just one change from last week’s derby win over Eintracht Frankfurt with injured captain Danny Latza forced to come out and Leandro Barreiro replacing him.

The Zerofivers weren’t at the races in the opening exchanges as the home side dominated possession and created plenty of chances. Ruben Vargas hit the post in just the 2nd minute and just one minute later, Philip Max had a great chance to open the scoring at the far post but couldn’t stretch himself far enough (3’). Kunde Malong’s mistake not long after left Ruben Vargas free and clear in front of Robin Zentner, but the Swiss man couldn’t control his shot (4’), before he then went close again, this time with a header from close range. It was plain to see that Mainz were riding their luck in this game, and it was never clearer than when Vargas pick-pocketed Öztunali before squaring to an open Marco Richter who proceeded to miss the open net (11’). An unbelievable scene then became even more unbelievable as Mainz went up the other end and took the lead. Robin Quaison roamed on the edge of the box before picking out Öztunali on the right who then cut inside before unleashing a splendid strike in to the top corner past a helpless Tom Koubek (15’). This sparked the Zerofivers into life and the next chances followed quickly with Aaron’s shot testing the gloves of Koubek once again. At the other end it was Niederlechner who had the chance to equalise but the ball was gathered safely by Zentner.

FCA were piling on the pressure in search of an equaliser. Niederlechner unleashed yet another shot at goal but Zentner wasn’t troubled thanks to a great block from Moussa Niakhate (27’). Then it was FSV’s turn to create some chances once again. Jean-Paul Boetius shot just over the bar after fine work from Barreiro (29’) . At the other end Richter was in amongst it once again as his shot missed the mark from ten yards, but Mainz couldn’t hold on forever. Four minutes before the break, Niederlechner put in a great ball across goal and who was there but Marco Richter to finally convert for the home side and make it 1-1. And so that’s how the two sides went in to half time.

Beierlorzer made two changes to start the second half with Daniel Brosinski and Taiwo Awoniyi coming on for Barreiro and Karim Onisiwo. The Zerofivers were, as a result, operating now with 4 at the back and not three with the aim being to be more stable than before the change of ends. It seemed to work initially with Mainz having the better of the chances to start the second period. But it was at the other end where all the controversy lay as Ruben Vargas went down under a challenge from Pierre Kunde and was asking for a penalty. The initial decision to wave away claims was then overturned after a VAR call and so the penalty was given to Augsburg, although any foul play from the Cameroon man could scarcely be seen. Nevetheless, it was NIederlechner who stepped up and rifled an unstoppable shot in to the top corner to put Augsburg in to the lead.