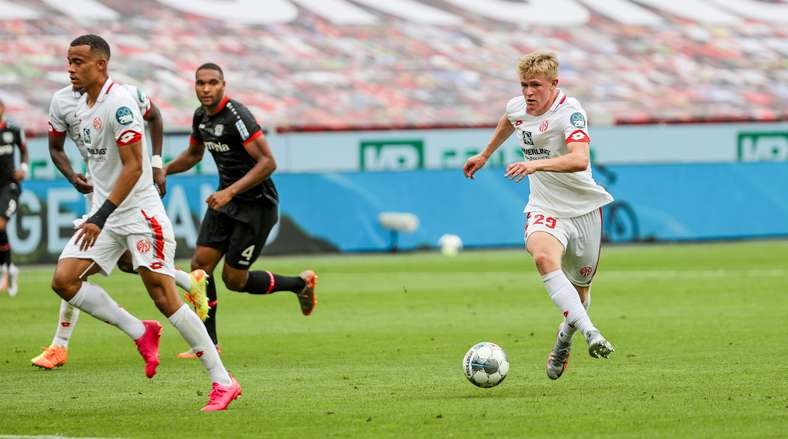 After two wins in a row and achieving safety, the Zerofivers took to the pitch for a final time in 2019/20 to face Bayer Leverkusen away on Saturday afternoon and were narrowly beaten 1-0. An early goal for Kevin Volland in the second minute of play after Mainz lost possession unnecessarily was the only goal of the game. An equaliser was definitely within reach for Mainz and Jean-Philippe Mateta found the back of the net, but the goal was ruled out due to an earlier offside position, as was the case when Edimilson Fernandes struck the woodwork in the closing stages of the match.

Achim Beierlorzer made two changes to the team who beat Werder Bremen last weekend as Jonathan Burkardt and Aarón started in place of Jean-Paul Boëtius (suspended) and Daniel Brosinski (bench). Stefan Bell returned to the squad for the first time since his serious ankle injury in August 2019, but the home-grown talent, whose contract expires at the end of the month, did not make an appearance.

The match had barely begun when the Zerofivers gave up possession too easily after a throw-in and Nadiem Amiri set up Volland, who left Flo Müller no chance from 12 meters out – 1-0 to Leverkusen (2’). Aarón prevented an early second goal as the Spaniard cleared a dangerous ball into the Mainz box (5’). Captain Danny Latza gave the first warning shot from the away team in the eighth minute, but his effort sailed just high of the target and Lukas Hradecky was not forced into a save. The Zerofivers found their way into the game after Leverkusen’s initial momentum, became much more organised at the back and began to poke holes in Leverkusen’s defence. Almost 20 minutes into the game, Jonathan Burkardt had the first shot on target for Mainz following a strong attack up the right wing (19’). After this, Leverkusen appeared to be dominating proceedings, but nothing much else happened in either box until the first-half water break. Amiri was next to put the ball in the back of the net (34’), but he was set up by Volland, who was in an offside position. Burkardt was making a name for himself as he had another attempt from around 20 meters out four minutes later, but the shot went wide and Leverkusen maintained their 1-0 lead as the teams headed into the changing rooms.

Chances on both sides

The Zerofivers brought Brosinski on for Aarón to start the second half, which could also have started with an early goal, but Mitchell Weiser’s effort could only hit the post following a free-kick – Müller would have been unable to stop it (47’). An equaliser came quickly on the other end of the pitch, but celebrations were cut short as it was ruled out – Karim Onisiwo tanked through the midfield before setting up Mateta, who got the better of Hradecky, but Mateta was ruled offside (49’). The next big chance of the match came two minutes later as Leon Bailey’s shot just went wide of the post (51’). After another Leverkusen goal was ruled out – this time for former Zerofivers captain Julian Baumgartinger (68’) – Jeremiah St. Juste had an opportunity to equalise for Mainz after a corner kick from Levin Öztunali, but the centre-back’s header flew just over the crossbar (71’).

It was evident in the final stages that neither team wanted the season to end there: Kai Havertz missed narrowly from 10 meters out in the 75th minute, missing what would have been a decisive goal. And substitute Edimilson Fernandes came even closer on the other side of the pitch as he hit the crossbar from 18 meters out only seconds after he had come on (85’). The Zerofivers again tried everything, but they ran out of steam after a long season, in which the Zerofivers have finished 13th in the table with 37 points after the narrow defeat.