Mainz in shock 2-0 win away at Dortmund

Mainz picked up an important three points in their relegation battle against Borussia Dortmund in an unlikely triumph. 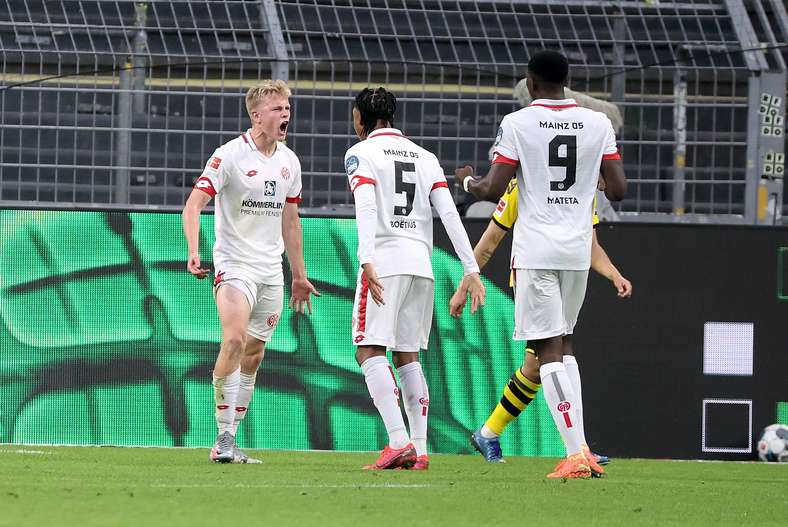 Jonathan Burkardt was ecstatic with his first goal.

Mainz picked up a deserved three points against 2nd placed Borussia Dortmund in a win that will have huge ramifications for the relegation battle. Jonathan Burkardt scored a header on the half-hour mark, and early in the second half Jean-Philippe Mateta scored a penalty after Danny Latza was fouled in the area. The Zerofivers delivered a disciplined, passionate and tactical display, and deservedly won. Now with 34 points after 32 Matchdays, Mainz are now five points clear of the relegation zone.

Head coach Achim Beierlorzer made a few changes to the side in the double gameweek, with at least one eye on the crucial relegation battle clash against Werder Bremen on Saturday. Jonathan Burkardt made his first start since matchday 3, and Ridle Baku, Pierre Kunde, Aarón Martín, Karim Onisiwo and Jean-Paul Boëtius also started. Daniel Brosinski, Phillipp Mwene, Leandro Barreiro, Robin Quaison and Levin Öztunali dropped to the bench. Taiwo Awoniyi missed out after sustaining a concussion against FC Augsburg last time out.

Beierlorzer said ahead of the game that he wanted to see his players display “a lot of diligence, reducing the space, great physicality, as well as being strong in the tackle”, and that is exactly what he got. Just as disciplined and focused as their coach had wished them to be, the Zerofivers got to work from the first whistle, denying Dortmund space to breathe, as well as taking advantage of the sloppy passes of the home team to break forward. The first shot in anger from either side came fifteen minutes in, when Axel Witsel’s shot was blocked by the Mainz defence, but after nineteen minutes, the dominant side was Mainz 05. Kunde had a half-chance before scuffing the ball wide, then Burkardt had his first chance of the game, before also skewing the ball wide after waiting seconds too long to shoot (28’).

Ridle Baku’s cross into the area after the half-hour mark was met by the head of the young Burkardt, and the Zerofiver gave Bürki no chance as Mainz broke the deadlock through the 19-year-old. The two academy products’ goal stunned the hosts and rewarded the rest of the team for a dour defensive display. The goal also gave Mainz renewed confidence, and they attacked several more times until the half-time whistle.

With no changes at half-time, Mainz came out of the gate at half-time with a direct strategy. Shortly after the Dortmund keeper saved Mateta’s first effort, he also turned away Karim Onisiwo’s shot, but just before Danny Latza could convert the rebound, he was tripped in the penalty area by Lukas Pisczek and the referee awarded a penalty  (49’). Mateta stepped up to take the penalty and rifled it into the bottom-right corner, sealing a perfect start to the second half for the Zerofivers. While Mainz continued to work industriously, Dortmund appeared off the pace, and even the disappointment of conceding for the second time did little to alleviate that mood.

Mainz’ defensive prowess and counter-attacking skill against the lacklustre Black-and-Yellows almost resulted in a third goal late on, when substitute Adam Szalai forced Bürki into a fingertip low save (78’). After an action-packed final ten minutes where both teams had chances to score, Mainz were finally rewarded at full-time for their diligence, and came away from Dortmund with three important points  in the relegation battle to savour and a result they wholeheartedly deserved.