Mainz in round two of DFB-Pokal after hard-fought win

Despite trailing at half time, Mainz 05 were too good for fourth-division side Havelse – Mateta scored a hat-trick 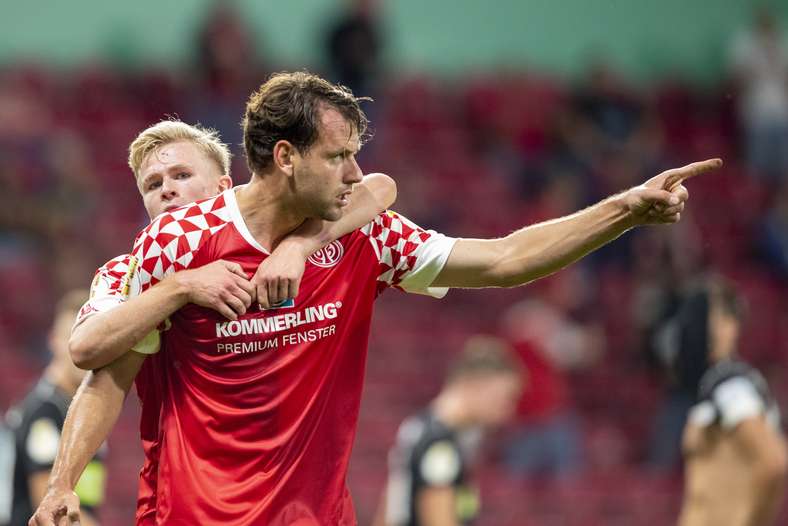 Job done. 1. FSV Mainz 05 found it tricky at times on Friday evening in the first round of the DFB-Pokal against outsiders Havelse, but a powerful second-half display saw them record a deserved 5-1 victory over the fourth-division side. After trailing at half time, goals from Jean-Philippe Mateta (3), Ádám Szalai and Robin Quaison secured victory in front of 1000 fans in the OPEL ARENA.

Before the game, all eyes were on who would be between the sticks for Mainz. On Thursday, head coach Achim Beierlorzer decided to go with Robin Zentner, and he spoke about how the 25-year-old was marginally ahead of his competitor, Flo Müller. The Zerofivers lined up in an attacking 4-4-2, with the creative Jean-Paul Boëtius next to captain Danny Latza in central midfield.

The fourth-division side started the game in aggressive fashion. Referee Arne Aarnink rightfully showed two yellow cards after less than two minutes; Moussa Niakhaté and Latza went in the book. The first warning shot of the game was fired by home-grown player Jonny Burkardt, but Havelse’s keeper Norman Quindt was able to make the save (4’). Jeremiah St. Juste had a free header from the subsequent corner, but the central defender fluffed his lines. Mainz took control of the game, but the underdogs stood firm in defence. The Zerofivers struggled to find gaps in the opposition’s defence; they had to be patient and settle for half chances. Then, against the run of play, Noah Plume slotted the ball past Zentner after the home side were guilty of switching off at a throw-in (17’). Just one minute later, the visitors had another chance, but a combination of defenders' legs and goalkeeper Zentner cleared the danger.

There was an opportunity to equalise almost half an hour in, but Daniel Brosinksi curled a shot just past the left post (30’). The Zerofivers had a double chance shortly before the break; first Burkardt and then Boëtius were denied by Quindt (44’). The fourth-division side’s half-time lead was lucky, but not entirely undeserved.

Frantic start to the second half

Neither side made a change at the interval. After just three minutes in the second period, Zentner had to pull off a save to stop Yannik Jaeschke putting his side into a 2-0 lead (48’). Jean-Philippe Mateta made his first mark on the game shortly afterwards, but great reflexes from Quindt kept out his effort, unmarked from a short distance. Six minutes later, however, the Frenchman gave Quindt no chance. After a nice ball from St. Juste, Mateta shrugged off the defender and finished clinically into the bottom corner for the equaliser (57’). He almost scored a second straight afterwards, but his header from Brosinski’s cross was saved (59’). Mainz were no longer going to let there be any doubt about who was in charge.

Shortly after his introduction to the game, Ádám Szalai could have given Mainz the lead, but after good link-up play from Baku and Nebel on the right wing, he couldn’t find a way past the keeper (63’). Quindt was on top form on this Friday evening and frustrated Szalai again in the 68th minute. A Mainz goal seemed just a matter of time at this stage. Havelse continued to hold firm, but Mainz were only looking to attack and sought gaps in the defence. They eventually found their goal through Szalai, who headed a Brosinski cross past Quindt from six metres out (77’). Mateta then scored another from 12 metres after a slick counter-attack (79’). Mainz’s top scorer from last season then got in on the act; super sub Quaison made it four from a pinpoint Baku cross (86’). The last moments of the game saw Mateta seal his hat-trick and a 5-1 victory thanks to Nebel’s assist. After securing a place in the second round of the DFB-Pokal, all attention now turns towards the start of the Bundesliga season. Mainz travel to RB Leipzig on Sunday 20th September (15:30 CEST).