Mainz fall to a bitter home defeat in their last match before the winter break. Alario scores a lat winner for ten-man Leverkusen. 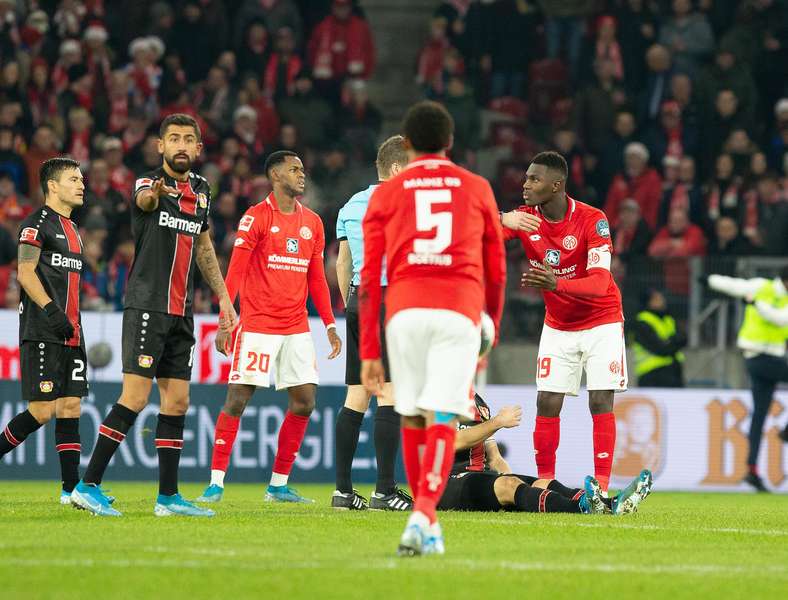 Mainz were made to rue numerous gilt-edge opportunities.

In their last game of 2019, Mainz 05 hosted a strong Bayer Leverkusen side in the OPEL ARENA. It was a must-win match for the Zerofivers, who started the day level on points with both Eintracht Frankfurt and Hertha BSC. In a game marred by disallowed goals, a late Alario winner saw Bayer Leverkusen win 1-0.

Achim Beierlorzer’s chosen starting XI understandably remained unchanged from the impressive 5-0 away win against Werder Bremen. Alexander Hack retained his placed in the centre of the Mainz back-line in place of Jeremiah St. Juste, who had served a suspension but was not in the squad due to family reasons; it was a well-deserved too after a particularly outstanding performance on the Weser.

It was a shaky start for the home side, and Leverkusen were dominating possession of the ball. The Zerofivers were fortunate not to be a goal down. Volland put the ball in the back of the net, but was rightfully flagged for offside (10’). That wouldn’t be the last disallowed goal of the match. That was the wake-up call for Mainz, however; the Zerofivers countered quickly, but Robin Quaison couldn’t direct his shot on target (13’). A short while later, FSV had another good opportunity to go ahead. Ádám Szalai couldn’t hit the target from close range (17’), but the home side were growing into the game well and starting to look dangerous on the counter.

VAR was a big talking point throughout the match, and this time it was Mainz, who were on the end of a contentious decision. Again the home side broke quickly; Aarón Martin found Quaison, who moved the ball on to Szalai. The Hungarian tucked the ball away nicely, but a VAR check concluded that Quaison had been mere centimetres offside in the build-up (32’). A tough decision to take for Mainz. Just before half time, the Zerofivers came close again. Ridle Baku picked out Quaison with an inch-perfect cross, but the Swede’s header was off target (44’). The scores remained level at half time.

Leverkusen head coach Peter Bosz reacted at half time, bringing on Karim Bellarabi for Panagiotis Retsos. The second half began in much the same way as the first; Leverkusen pushed forward and put Mainz under massive amounts of pressure. Kai Havertz fed Diaby, whose was blacked by Baku (52’). Leverkusen’s formation change did them a lot of good and they went 1-0 in the 65th minute; or so everyone thought. Again Volland put the ball in the back of the next, but VAR spotted a handball and the goal was disallowed.

Tough for the away side, who had a man sent off after 72 minutes; Wendell brought Levin Öztunali down and was shown his second yellow card. The buzz around the OPEL ARENA was huge when Jean-Philippe Mateta made his third substitute appearance in three games. Quaison fed the Frenchman, who deftly knocked it past Jonathan Tah, but Hradecky was equal to the effort and denied the young star (74’). After 76 minutes, Mainz went close again as Kunde looked to bend one into the top corner, only to see it whistle inches past the upright. The Zerofivers were putting ten-man Leverkusen under all sorts of pressure. It was a thrilling match, which Mateta could have put to bed, but once more Hradecky was equal to his effort. However, squaring it to Quaison would have been the better option (85’).

It was end-to-end football as the game entered its final five minutes. Just before the end of the 90 minutes, Öztunali came close and Zentner denied Volland at the other end. The fourth official showed four minutes of added time, just enough time to break Mainz’ hearts. Volland was denied again by Zentner, but he latched on the rebound and squared it to Alario. The Leverkusen man was not going to miss an open goal from that distance. The final whistle blew just moments later, and everybody knew how close the Zerofivers had come to winning, but Mainz were made to rue their numerous missed opportunities and slumped to their fifth home defeat of the season. The Zerofivers go into the winter break with 18 points after 17 Bundesliga matches.