FSV Mainz 05 took their first chance to go ahead, while the visitors rescued a deserved point at the death. 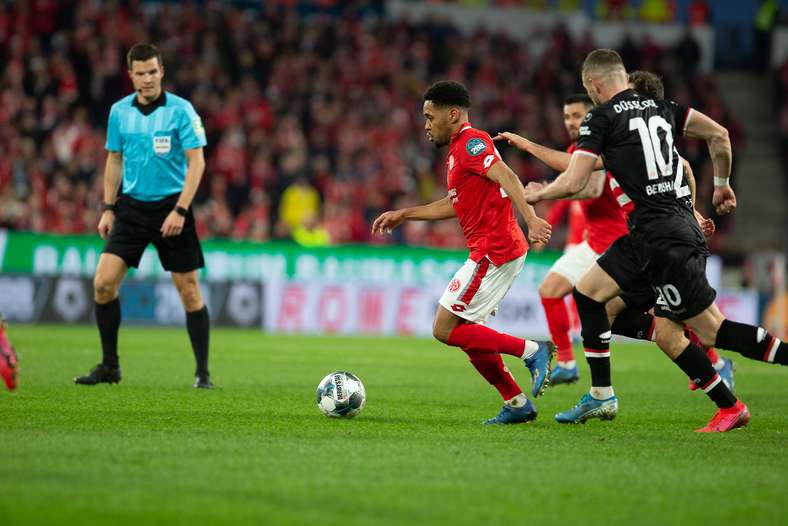 Mainz faltered to a draw in a game lacking quality.

Mainz drew 1-1 with Fortuna Düsseldorf in a Sunday evening clash featuring two contrasting halves: the first were chances were in short supply and action was at a minimum; the second featuring two goals, many chances and a red card. Mainz went ahead with their first shot on effort at goal in the 63rd minute, while Fortuna equalised five minutes from full-time. In the interim, Mainz 05 striker Jean-Philippe Mateta picked up his second yellow card of the game for a foul and was sent off. Despite the result, Fortuna remain in the relegation zone, with Mainz above them by four points.

Achim Beierlorzer made one change to the side that beat Paderborn last time out, as captain Danny Latza came in for Levin Öztunali, and Mainz shifted into a 5-2-3 formation.

The visitors dominated the early proceedings, as their high pressing and relentless waves of attacks fell upon the Mainz defence and goal. Markus Suttner fired high and wild following a corner three minutes in and barely a minute later Matthias Zimmerman missed with a volley. Mainz were getting overwhelmed regularly in the midfield, prompting a tactical shift early on, as Beierlorzer directed his side to change into a 4-4-2 formation, with Ridle Baku and Robin Quaison becoming wingers. Although this didn’t yield any more chances for Mainz, they were much more defensively stable.

The home side had a couple of slices of luck and their Robin Zentner to thank for going into the break goalless. On 35 minutes, Suttner’s shot from close range looked like it was destined to open the scoring but for a fabulous reflex save from Zentner to keep the tie even. The stats at half-time looked very bleak from a home perspective, as the visitors had had 10 shots compared to Mainz’s 0, and the home side had only 38% possession of the first 45 minutes. However, despite an unflattering performance from the Zerofivers, the score remained 0-0 at the break.

Beierlorzer shuffled the pack once more at the start of the second half, as Florian Müller came on for Robin Zentner, who, despite his amazing save in the first half, picked up an injury. Pierre-Gabriel was also hooked for Levin Öztunali, who would go on to score Mainz’ first goal of the tie, after some more Düsseldorf efforts on goal. Despite only just coming on, Florian Müller showed no signs of rustiness as he made a similarly brilliant save only four minutes in. Just after the hour mark, Robin Quaison played a defence-splitting pass into Jean-Philippe Mateta, who got away from his marker before chipping the ball over the defence and the goalkeeper to the head of Öztunali, who nodded the ball in for Mainz’ first shot, and first goal, of the game (62’).

However, after their jubilation at the first goal, things would begin to unravel for Mainz. Only 15 minutes after he assisted the winner, Mateta lashed out at Andre Hoffmann and picked up his second yellow card for his troubles, leaving Mainz with only 10 men on the pitch. The feelings of insecurity and desperation that rippled through the Mainz team after their lead became even shakier was palpable, and shone through in the circumstances that led to the visitor’s equaliser. Due to a failure to communicate between Müller and Bruma, Bruma tried to clear a routine cross that would have just gone into the keeper’s waiting arms, and in the midst of the collision and confusion, Karaman pounced and scored an easy and completely unavoidable goal. At full time, the score was 1-1. Mainz travel to Köln in their next match on Saturday, having now picked up 26 points from 25 games. The next home game at the OPEL ARENA will take place on the 20th of March against RB Leipzig.