A successful end to the training camp in Spain, the Zerofivers ran out 2-0 winners against Dortmund. 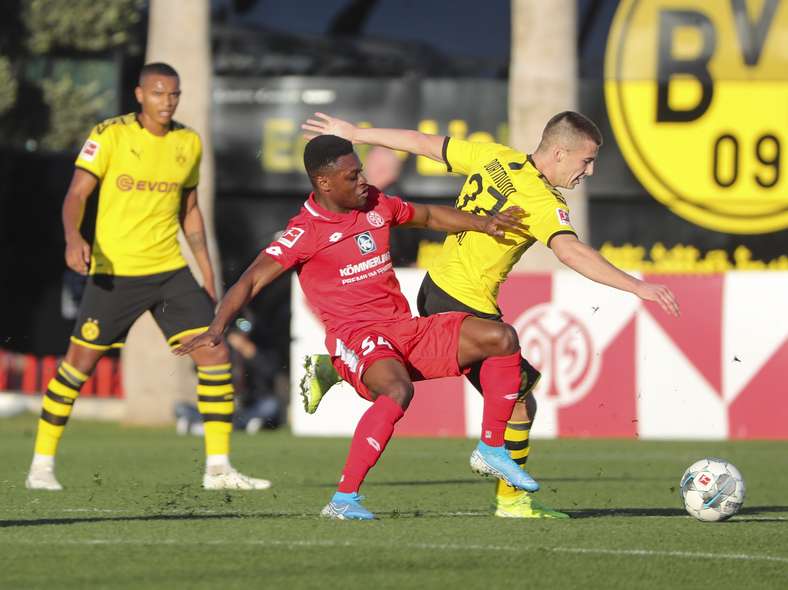 Ridle Baku locked down the midfield during the friendly in Marbella.

The Zerofivers conclude their week-long training camp in Estepona on a high. Achim Beierlorzer’s side deservedly ran out 2-0 winners over Borussia Dortmund, putting in a much better performance than that, which was on display against FC Emmen in midweek. Karim Onisiwo (45’+1) and Moussa Niakhaté got the goals for FSV.

“We played some good football for large stretches in the match; we won the ball well and may have even been a little wasteful. We have to see to it that we are extending these good phases to last the whole 90 minutes. We deserved to win, and it was a good evening all round,” said centre back Alexander Hack.

The Zerofivers started the match the better of the two sides, playing with pace and aggression, something that Beierlorzer has been wanting to see. In the 8th minute, Mainz were celebrating, however Mateta was ruled offside after he put the ball past Marwin Hitz. After the half-hour mark, Dortmund began to flex their muscles, and were combining well. BVB and Julian Brandt were denied the lead only by the quick reflexes of Robin Zentner (36’).

Onisiwo fired the Zerofivers into the leads with the last kick of the first half. The Austrian capitalised on Akanji’s mistake and put the ball through the open legs of Hitz.

Beierlorzer made four changes at the start of the second half. At the back, Flo Müller replaced Zentner in goal,Daniel Brosinksi came on for Pierre Gabriel on the right-hand side of the back four. Ahead of them, Kunde made way for Leandro Barreiro in midfield and Szalai replaced Mateta up top.

The game’s second goal was a product of Aarón’s pinpoint delivery from the corner. The ball in was laid on a plate for Niakhaté to rise highest and nod it home. Hitz had no chance (55’). A short while later, Quaison had the chance to put the game well beyond Dortmund, but the chance went begging (59’). It was noticeable that the team had been working on set pieces in the morning’s training session.

After 65 minutes, Phillipp Mwene, Alexandru Maxim, Jonathan Burkardt and Ji Dong-won came on for Baku, Quaison, Öztunali and Onisiwo. Jonathan Meier and Ahmet Gürleyen also got some minutes in the final phase of the match, replacing Aarón and hack (80’).

Despite the wholesale changes, Mainz remained the better side. BVB tried to get things going in attack, but Beierlorzer’s men remained stout in defence.