The Zerofivers lose against Augsburg despite dominating their opposition for long periods. 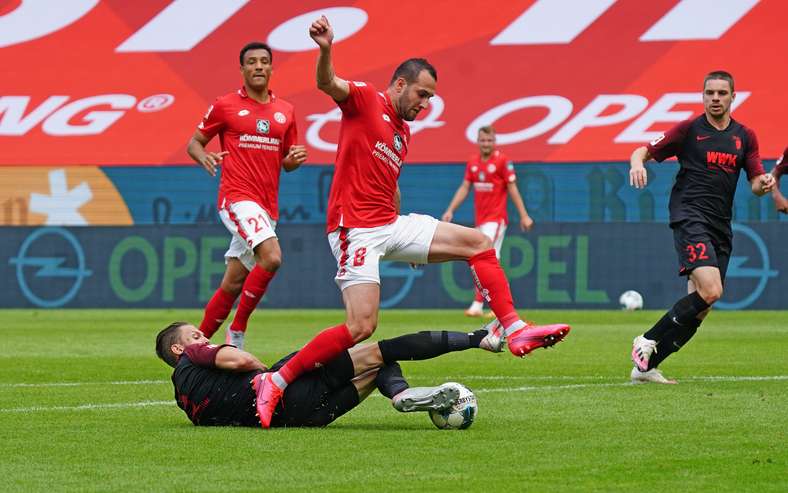 Mainz had many chances, but were unable to find the net.

A goal by former Mainz man Florian Niederlechner within the first 45 seconds condemned the Zerofivers to a bitter defeat against in their home game against Augsburg. Despite conceding early, Mainz had the better chances of the game, and dominated proceedings at times, but were the victims of their lack of consistency in front of goal as well as the heroics of visiting keeper Andreas Luthe.

Achim Beierlorzer made no changes from the side that beat Frankfurt 2-0 last week. However, Ridle Baku, who was suspended for the Rhein-Main Derby, was available again and made the bench.

The match begun as both sides had expected – intensely. Barely 50 seconds had gone on referee Marco Fritz’ watch when Florian Müller had to pick the ball out of his own net. Carlos Gruezo headed a ball towards Mainz’ penalty area, when Florian Niederlechner managed to lose his marker, and chipped the ball over the onrushing Müller on the turn, to give Augsburg an early lead. Mainz were caught cold, but they recovered and began to press forward. The Zerofivers took control of the game and had much more possession and control of the ball, but were unable to get the ball into dangerous positions against the defensively-minded Augsburg. After 15 minutes, Taiwo Awoniyi had the best chance for the Zerofivers, but his flicked header missed the far corner, and to make matters worse, the striker was injured in the process, clattering his head against his marker. The Nigerian was stretchered off and taken to the hospital after a lengthy delay, and Karim Onisiwo came on for him.

After their early goal, the away side sat back and rarely threatened scoring a second goal, and if they did get forward it was as a result of a counter-attack. Ruben Vargas almost added a second, but his shot from 16 metres went wide left. On 39 minutes, Mainz had a clear chance that should have resulted in a goal, but despite being played through on goal by Robin Quaison and rounding the keeper, JP Mateta’s shot was too slow, and Philipp Max easily made the goal-line clearance. Mainz still kept trying to find an equaliser before the break. Onisiwo had an effort well saved by Luthe, and then in added time at the end of the first half Luthe somehow got his hand to Mateta’s header. Mainz would have deserved an equaliser, but went into the break behind.

The second half began when Mwene came off for Baku. At the start of the first half, the guests threatened for the first time, as Vargas unleashed a shot from distance which Müller tipped over the crossbar. The Zerofivers attempted to match the higher intensity of Augsburg, and relied on their new skill from set-pieces they took advantage of last week against Frankfurt. Onisiwo tried to score from Brosinski’s corner, but Luthe caught it. Levin Öztunali almost scored, but his trickery was wasted as his shot his Felix Uduokhai. It was very similar to the first half, as Mainz had all the possession and all the chances, but were unable to find the back of the net against an Augsburg side who were defensively organised and sat back on the counter-attack. Beierlorzer added fuel to the fire of the Mainz attack when he brought on JP Boetius for Barreiro for the last 25 minutes.

No reward for lots of effort

Though they were defensively attentive, offensively energetic and possessed good creative outlets, Mainz were unable to score. Adam Szalai and Edimilson Fernandes came on for the final 10 minutes. The Hungarian striker was involved almost immediately, but he fired weakly at the goalkeeper (81’). Mateta ballooned a header clear of the goal, and Boetius also shot far too high over the goal. The Zerofivers’ faltering efforts persisted right up until the final whistle, whereupon Augsburg celebrated, while Mainz felt that they should have done far, far better.