Mainz come from 2-0 down against Cologne to draw

Mainz managed to get a point against the odds on Sunday as they drew 2-2 with Cologne. 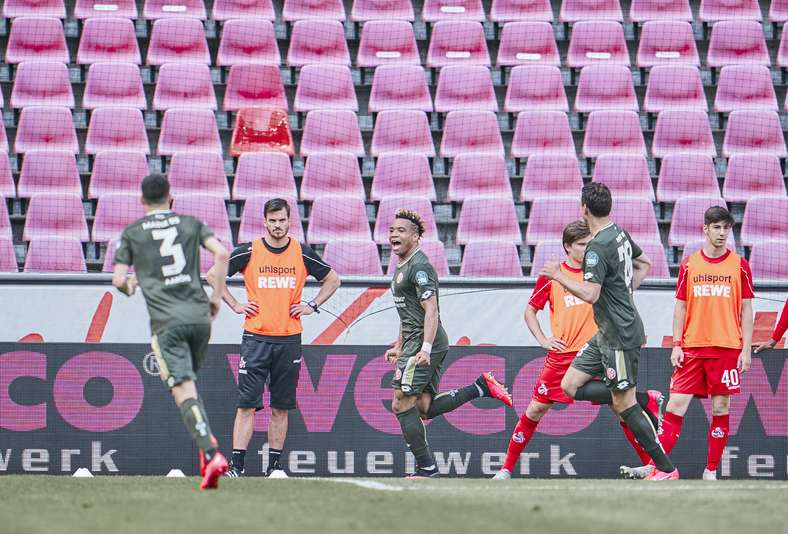 Kunde's goal was a sight to behold.

Mainz‘ return to Bundesliga action was not for the faint-hearted: In an action-packed match on Sunday afternoon Mainz fought back from a two-goal deficit to level the scores and get a deserved point away in Cologne. After going behind early after a Mark Uth penalty and then conceding early in the second half from Florian Kainz’ header, the Zerofivers dug deep, reducing the deficit to one goal thanks to Liverpool loanee Taiwo Awoniyi’s first Bundesliga goal, then levelling the score thanks to a tremendous solo goal from Kunde Malong in the space of 11 minutes.

After almost 70 days since Mainz’ last match – a 1-1 draw with Fortuna Düsseldorf on the 8th of March – Zerofivers coach Achim Beierlorzer decided that it was time to ring in the changes. Only Moussa Niakhaté, Ridle Baku, Karim Onisiwo and Robin Quaison kept their places in the side. South Korean summer signing Dong-won Ji made his first Mainz appearance after recovering from a knee injury that he sustained after first signing for the club. In goal Florian Müller replaced the injured Robin Zentner. Setting up in a 4-2-3-1 formation, captain Niakhaté was partnered in defence by Jeremiah St. Juste, with Aarón Martin preferred over Phillipp Mwene on the left side. The midfield partnership of Edimilson Fernandes and Kunde formed the spine of the side, and Jean-Paul Boëtius took the number 10 role, flanked by Ji and Quaison, with Karim Onisiwo leading the line.

Barely five minutes of the match had passed before Cologne struck first. A clumsy challenge by Niakhaté on Uth in the Mainz penalty area led to a penalty being given to and converted by the hosts. Despite the early upset, Mainz worked hard to get back into the game and stabilise defensively, as well as trying to score themselves. Mainz almost equalised only 7 minutes later, but Onisiwo’s good cross to the feet of Boëtius was cleared by the onrushing Leistner (12’). In an increasingly open game, Moussa Niakhaté made an excellent block to deny the goal-bound shot of former Zerofiver Jhon Cordoba six minutes later, and Mainz began to exert their influence on the possession stats, yet continued to lack that elusive goal. The second big chance of the game came to talismanic striker Robin Quaison, but his shot didn’t trouble Timo Horn in the 29th minute. By the break, despite an unfortunate early blunder, Mainz had performed respectably, and there was all to play for in the second half.

Head coach Beierlorzer made no changes at the break, but after Quaison tripped in the midst of a promising chance, Cologne broke away and scored their second goal of the day. Jonas Hector took a free-kick from a central position and fired it to Dominick Drexler in the wide area, who whipped in a cross to the far post where it was headed in by Florian Kainz (52’). Beierlorzer reacted by making his first change of the afternoon, bringing off debutant Ji for Liverpool loanee Taiwo Awoniyi four minutes later. Following a strong save from Flo Müller to deny Ellyes Skhiri, Mainz equalised through their super substitute Awoniyi. In a great move created by Onisiwo and Quaison, the Swede fed Baku on the right, who whipped in a low cross that Awoniyi was alert to, and the Nigerian finished the move with a tap-in (61’).

In the 69th minute Mainz made their second substitution of the afternoon, bringing on Adam Szalai for Fernandes and went on the offensive, searching for that equalising goal. Just two minutes later, it was the Zerofivers’ powerful Cameroonian midfielder Kunde Malong who popped up with the goal, charging through the Cologne team from midfield before passing it under the advancing Horn (72’). Cologne appeared stunned by the comeback, but almost won it late on through Cordoba, although his header flashed wide. At the other end, Szalai put the winner on a plate for Onisiwo, but it was parried thanks to an amazing save from the Cologne keeper.

Müller denied Cordoba twice more in the last ten minutes, while Awoniyi almost won it at the death, but was so surprised that Aarón’s speculative cross had reached him, he skewed wide. After an intense last five minutes of end-to-end football, the referee blew his whistle and Mainz took a valiant point, putting them four points clear of the relegation zone. Next Sunday (15:30 CEST) Mainz take on RB Leipzig at the OPEL ARENA.