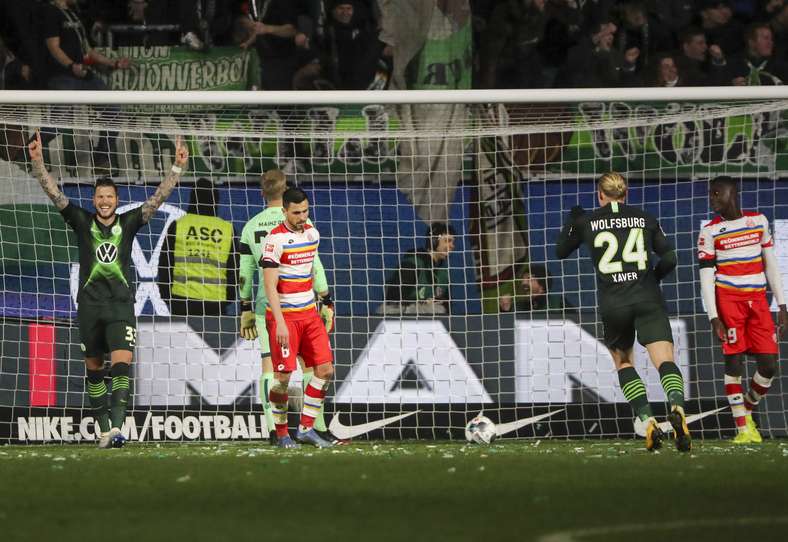 The more clinical side proved to be the happier one in the end.

1.FSV Mainz 05 were beaten handily by home team VfL Wolfsburg on Sunday evening. After a great opening phase where Mainz boasted the lion’s share of possession and looked the more likely side to score, they succumbed to the counter-attacking and clinical finishing of the Europa League-chasing Wolves, losing 4-0 thanks to a Renato Steffen brace and a goal apiece from Yannick Gerhardt and Josip Brekalo.

Zerofivers head coach Achim Beierlorzer made one change to the side that drew against Schalke, bringing in Ronaël Pierre-Gabriel for the injured Jeremiah St. Juste.

The game in Wolfsburg started frantically as despite less than four minutes having been played, Mainz had already forced six corners without managing to convert a single one. After ten minutes, the guests also boasted four shots on target, but no goals despite a dominant early display of football from the Zerofivers.

The guests took an unexpected lead shortly after with their first shot on target. Brekalo found himself with some space 20 metres out and placed his shot perfectly past Robin Zentner, who managed to get a finger on the ball, to no avail. The Zerofivers reacted to falling behind by playing more defensively within their own half. Minutes later, Mainz had two chances in quick succession. A shot from Adam Szalai took a deflection but sailed wide of the post (28’). The Hungarian had another chance off the resulting corner, but his header flew over the crossbar (29’). Both teams looked evenly matched as time ticked on, but a miscommunication just before half time led to the Zerofivers going 2-0 down. Zentner made a quick reaction save off a deflected cross from Daniel Ginczek, but ran into Moussa Niakhaté on his follow-up save attempt, allowing Steffen to capitalise on the slapstick scene by heading it home (45’).

Caught unaware just after the break
At half time, Beierlorzer brought on Jean-Paul Boëtius for Leandro Barreiro after the latter had picked up a yellow card in the first half. Mainz were looking to set up in a more attacking-minded formation in order to salvage at least a point from Wolfsburg, but were caught unaware yet again. Ginczek got on the end of quick counter-attack and laid it off to Yannick Gerhardt in the box, who only had to tap it home to make it 3-0 (49’). Wolfsburg could have added another on the hour mark, but Steffen’s attempt to one-time a Paulo Otavio cross flew just wide (59’). Five minutes later, Zentner denied Brekalo on a one-on-one to keep the score at 3-0. But, the keeper was powerless to stop Wolfsburg on their next attempt, as Steffen danced his way through half the Mainz defence to nab his second of the night (68’).

The match had already been decided by then, as Beierlorzer’s substitutions were unable to make an impact. The head coach had brought on Karim Onisiwo and Jean-Philippe Mateta for Daniel Brosinski and Levin Öztunali, but the changes failed to liven up the Mainz attack. It was only in the closing minutes of the match that the Zerofivers showed signs of perhaps netting a goal of their own. Mateta was unlucky in the 74th minute, as his header off a Ridle Baku cross hit the post. Five minutes later, Onisiwo found himself with some room twice in quick succession, but saw his first attempt saved by Koen Casteels before his second narrowly missed (79’). The final 10 minutes passed without either side really having an impact, as the match finished with a clear defeat for the Zerofivers. Mainz now have two upcoming home games against SC Paderborn and Fortuna Düsseldorf to hopefully pick up points and widen the gap to the relegation zone.