Quaison, Boëtius and Fernandes score in relegation clash in the OPEL ARENA 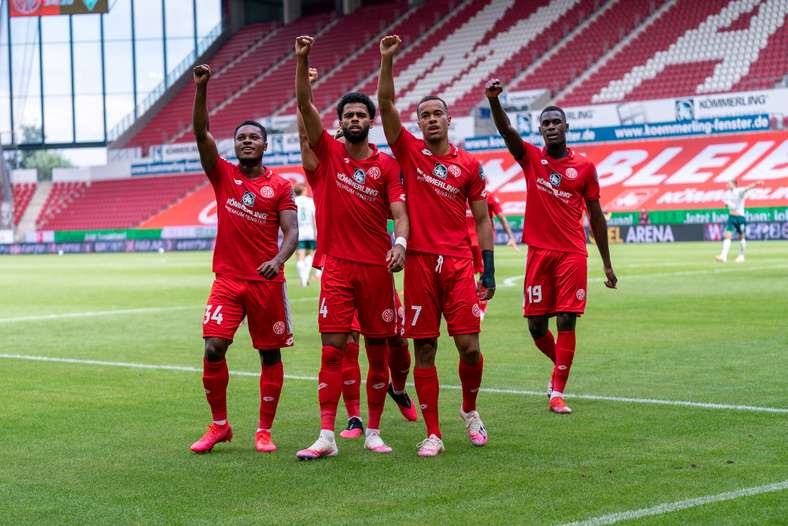 Mainz are staying up! Thanks to a hard-fought 3-1 win against relegation rivals Werder Bremen, the Zerofivers have secured their place in the Bundesliga for a 12th consecutive year. Robin Quaison and Jean-Paul Boëtius scored for Mainz before the break and Yuya Osaka pulled one back for the guests around 30 minutes later. In the exciting final stages of the match, substitute Edimilson Fernandes scored after a fantastic set-up from Ridle Baku to put the match to bed and secure safety.

Achim Beierlorzer made two changes following the win in Dortmund. Goalscorer Robin Quaison started ahead of Jonathan Burkardt and Daniel Brosinski also replaced Aarón in the starting line-up. The head coach didn’t make any changes to the set-up and sent the Zerofivers out in a 4-2-3-1 formation.

Werder, for whom a win in the OPEL ARENA was almost necessary in their fight to stay up, started the game on the attack and looked for ways forward. Joshua Sargent forced Florian Müller to make a fine save after just four minutes, as Mainz’s home-grown keeper went to ground to prevent the ball going in the near corner. Shortly after, Leonardo Bittencourt missed the target narrowly with a curling effort from ten yards out (7’). Mainz found themselves under constant pressure in these opening minutes and attempted to break free during these tense moments. The hosts had their first half-chance in the 10th minute as Jiri Pavlenka saved a deflected shot from Ridle Baku. Just two minutes later, Philippe Mateta hit the ball over the bar from a tight angle. The match became a real battle in the following moments as Mainz also had many promising opportunities. After a one-two with Karim Onisiwo, Boëtius had a shot, but his solid effort from around 20 yards out was too central to trouble the Bremen keeper (18’).

Mainz managed to consistently stifle the tempo in Bremen’s attacks whilst also creating more and more of their own opportunities on the other side of the pitch – and the next attack was the breakthrough. Brosinski struck a free-kick from midfield to the far post and Onisiwo’s header was stopped on the line, before Quaison hit the loose ball over the line from close range to give Mainz a 1-0 lead (25’). The goal seemed to do Mainz the world of good as they made it 2-0 only five minutes later. Captain Danny Latza broke through the midfield impressively and put Boëtius in a great position, who scored a great goal with his weaker left foot from the edge of the penalty area (30’). The Zerofivers had an opportunity to essentially end the game early with a double chance as Pavlenka made two fantastic saves to deny both Onisiwo and Mateta and keep the game alive (36’). Bremen replied strongly shortly before the end of the first half, but Osako’s header in the 43rd minute wasn’t strong enough and Müller was in place to stop the effort. Mainz maintained their deserved two-goal lead and referee Manuel Gräfe blew the whistle to end the first half.

The guests put all their eggs in one basket for the second half, bringing on two attacking forces in Niclas Füllkrug and Fin Bartels, while Levin Öztunali replaced goalscorer Quaison for Mainz. In a repeat of the first half, the guests had the first chance of the second half. Substitute Füllkrug beat Jeremiah St. Juste and forced Müller into another fine save (53’). Onisiwo gave the first warning shot from Mainz, but the Austrian’s effort went well over the crossbar (55’). Werder scored their goal just before the hour mark as Davy Klaassen fed Osako the ball from the goal line and Osako left Müller no chance with his volley. In a now highly emotionally-charged match, the recently brought-on Ádám Szalai had a chance shortly after to score a third goal for Mainz after a counter-attack. Onisiwo set up the Hungarian masterfully, but Pavlenka came from out of his own goal to make the save (66’). Mainz began to find more and more holes in the Werder defence and only three minutes later there was more impressive stuff from Onisiwo as he forced Pavlenka into a world-class save (69’).

Following this, there was less action on both sides of the pitch in the final stages until Boëtius tested the Werder keeper from a tight angle in the 78th minute. Shortly beforehand, Achim Beierlorzer had brought on an additional defender in the shape of Alexander Hack and Mainz played defensively with five at the back until the final whistle. Efforts from Bartels and Szalai both missed the target clearly (80’, 83’). Bremen tried everything, but Mainz substitute Fernandes finished the game off in the 85th minute. Baku set up the defensive midfielder perfectly and the Switzerland international produced a sublime finish. It was the goal to ensure Mainz’s safety! The Zerofivers stayed strong in the five minutes of added time. With 37 points from 33 games, Mainz will face Bayer Leverkusen next in the final game of the 2019/20 Bundesliga season.