"LOSING GAMES IN THE OPPONENTS BOX"

The Zerofivers head to the capital on Tuesday evening - Schröder: "The coach used very clear words when speaking to the team". 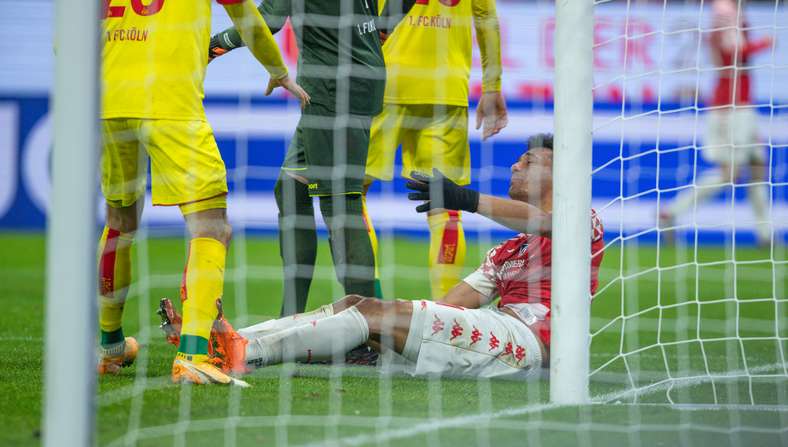 Frustration in the box: Karim Onisiwo failed to beat Timo Horn with his head against Cologne shortly before the end.

"Less talk, just do it," demanded sporting director Rouven Schröder in the immediate aftermath of the disappointing home defeat to 1. FC Köln on Saturday afternoon in the OPEL ARENA. On the pitch, the Zerofivers can speak out and make amends for the defeats in Bielefeld and against the Effzeh as early as Tuesday evening (8.30pm CET) in the capital, where Hertha BSC awaits the Rheinhessen side.

The upward trend - five points from three games in the matches against Schalke 04, SC Freiburg and against TSG 1899 Hoffenheim - was followed by disillusionment. Instead of the hoped-for leap up the table in the clashes with direct rivals, Mainz remain towards the bottom of the table. In 17th place, they still have five points from eleven games. "Everyone is angry, no one is happy. There was a lot of frustration after the Cologne game because we should have done things better. The coach had very clear words for the team," Schröder said at the press conference on Monday morning. And Jan-Moritz Lichte also emphasised that it was no longer a question of promising improvement through words, but of giving the appropriate answers on the pitch. "We have now missed two chances in Bielefeld and against Cologne, which is very annoying. But regardless of that, we are going to Berlin and we know the importance of every single game," said the head coach.

It's about complete conviction to want to score the goal

According to Lichte, the increased pressure should not influence the preparation for the match with the Berliners. There is not much time anyway. Video analysis and recovery on Sunday morning will be followed by the final training session at Bruchweg early on Monday afternoon before the Zerofivers board the plane north. After two rather defensively oriented opponents, Lichte expects an opponent in the capital who will be more active in shaping the game. This could suit the Mainz game plan, with more spaces and offering more frequent opportunities for counter-attack, which was implemented extremely efficiently not least in Freiburg. The prerequisite for Mainz to capitalise on these situations, as the coach also points out, will always be the final consistency up front. It is true that defensive lapses are annoying and have recently led to avoidable goals. But: "The number of big chances created is at a high level (editor's note: before the game against Cologne, Mainz ranked fifth in the league). We are currently losing games in the opponent's box, that has to be made clear. The players have to believe in their ability to put the ball in the back of the net. We have the opportunities, but we have to finish them with conviction. It's about the complete conviction to want to score the goal when the chance presents itself."

Mainz will face Hertha with belief, determination and the unconditional will to collect valuable points in the last two Bundesliga games of the year. But here, too, the motto is: "Do, don't say", as the coach underlines. The Mainz eleven should let actions speak for themselves, he said, quietly criticising the verbal rash of some players following Saturday's defeat. It is conceivable that Lichte will make personnel changes in the capital, rotate in the middle of the busy week of games and give fresh faces the chance to prove themselves. He can draw from the full range of options. Only Ádám Szalai, Phillipp Mwene and Levin Öztunali are still out of action.