Beierlorzer spoke to the press ahead of this Saturday's home match against SC Freiburg. 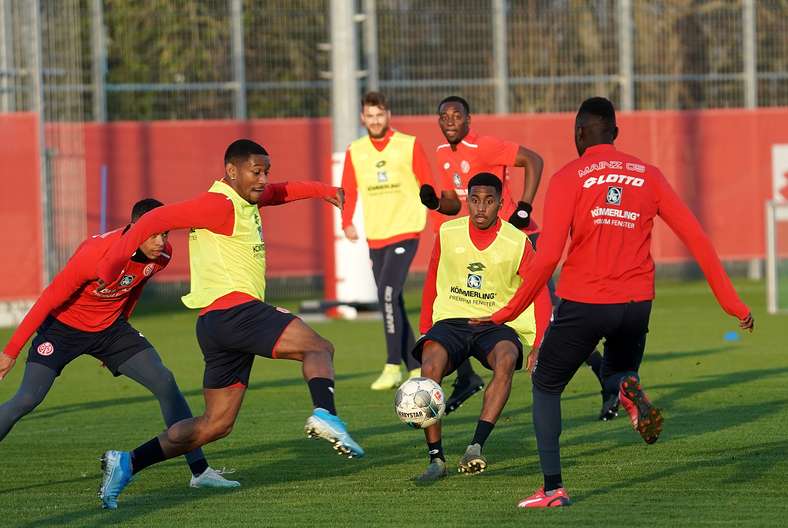 The fight for places in the starting XI is competitive.

On Thursday afternoon, there was palpable excitement for the return of the Bundesliga in the OPEL ARENA. Achim Beierlorzer is expecting an exciting second half of the season, with the Bundesliga being tight at both the top and bottom of the table. FSV’s head coach is hoping to put some distance between Mainz and the drop zone.

Alongside the potentially thrilling Rückrunde, Mainz 05’s match against SC Freiburg on Saturday (15:30 CET) was a key topic for discussion in the press conference. It’ll be a challenging match for the Zerofivers, but one, in which they hope to wrap up the win and go well in their first outing of 2020. “Freiburg are a great side, and they were really good in the Hinrunde”, Baierlorzer warned. The Mainz head coach went on the say that it’s nonetheless the case that “we want to take all three points.” Beierlorzer has already tasted victory against the Breisgau club this season; his FC Köln side triumphed 2-1 over Christian Streich’s men. Noticeably, it was Beierlorzer’s first ever win as a Bundesliga head coach, and one of only two home defeats suffered by Freiburg in the first half of the season.

While this win gave momentum to Köln, Beierlorzer was more interested in what led to the 3-0 away defeat in Baden on the opening day of the 2019/20 season. “the game was completely open until the 81st minute. Then, Freiburg had the key moments to decide the game on their side, something we always talk about.” The 52-year-old went on to emphasize that this is what football is all about. The question then was about which team could utilise these moments best at the weekend.

Learning from the Leverkusen match

The Zerofivers will want to make sure that they are on the right end of the result, and the coach says that “we are playing at home and want to show what we’re good at. We must use the space and move the ball around well”. But, according to Beierlorzer, “Freiburg are always capable of finding a solution and escaping pressure. We have to be ready for this and play with good tempo going forward. We’ve done that a lot recently, but nust need to be less wasteful in front of goal.” FSV’s head coach said that this was the deciding factor in the home defeat to Bayer Leverkusen.

After an “intense week of training in really good conditions” and with the momentum of the 2-0 friendly win over Borussia Dortmund, the Zerofivers want to nullify Freiburg’s strengths. “They set themselves up to be really compact, have a lot of desire and are defined by teamwork, effort and discipline.” These are attributes that Beierlorzer wants his own team to show, in order to pull away from the relegation zone.

FSV expect around 22,000 spectators in the OPEL ARENA to attend the first home game of the new decade. For the match, only Danny Latza and Stefan Bell (both in recovery), plus Edimilson Fernandes (knee), will have to be replaced. “Some tough decisions will have to be made. But I make these decisions. That’s my job, even if I struggle with one or two of them.”

Celebrating every goal in training

One player, whose chances of featuring are quite high, is Jean-Philippe Mateta, who missed virtually all of the Hinrunde. Rouven schröder knows just what the young Frenchman means for the team, “You can easily see how the mood in the camp is with him back. He’s so important to us and we’re looking forward to having him for the Rückrunde. He celebrates every goal in training, even when it’s from a yard out.” Schröder downplayed any rumours of a departure that may have been floating around in the media.