Lichte: "DISAPPOINTED, BUT WE MOVE ON"

A step forward despite the 0-1 defeat: unity and defensive performance inspire confidence 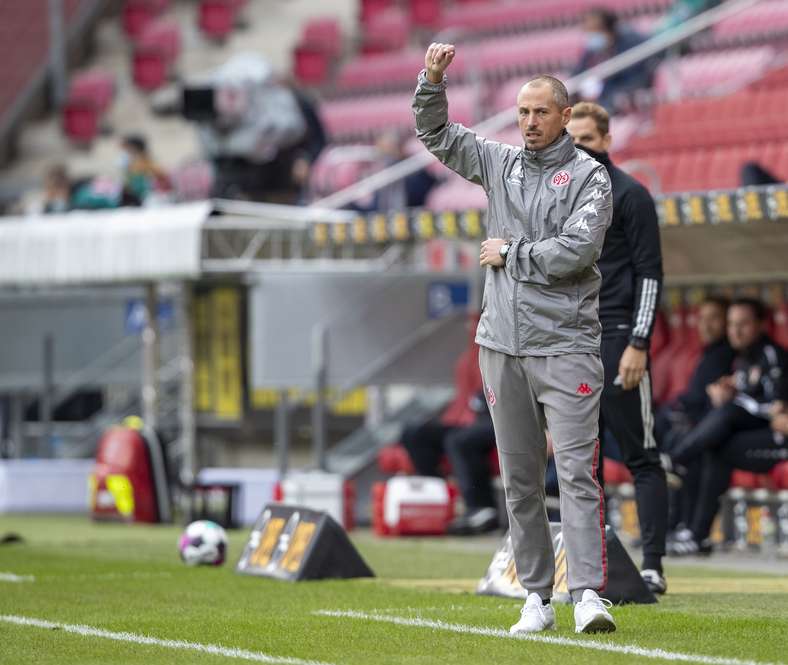 The 90 minutes at the OPEL ARENA should have been a classic nil-nil encounter. But Bayer 04 Leverkusen used a set-piece to inflict the fourth consecutive defeat on Mainz 05. Nonetheless, the performance sparked cautious optimism among those involved. "It was a positive first step," said Rouven Schröder after the 0-1 loss, "With this passion we can score again.”

The vast majority of the 250 spectators, who applauded the team off the field, probably thought the same way. With the few fans who were of a different opinion, the Mainz head coach personally and emotionally discussed the situation with them on the edge of the pitch. "You can also have your say with us," said Jan-Moritz Lichte. "It was a discussion to make it clear that the team gave everything. Of course we are allowed to talk about what we need to do to be better," said Lichte, adding: "We need these emotions that our fans have every week. It's important for us to show that we bring these emotions to the field as well. That is what we have done. Now we have to get out of this situation together.”

At the moment there is a little bit missing

The game against the ambitious Leverkusen team could have been a first sign of this. "The team showed collectively that they had the will to win the game, to give everything, to chase after every ball, be aggressive, compact, and very good work off the ball," emphasized the Sporting Director. "We pushed hard in the second half time and time again, had many moments where the game could have turned. But at the moment we don't have the prowess in front of goal," said Schröder. "We invested a lot in the game, but Leverkusen also had to invest a lot to win here. It's disappointing for us, but we'll move on," said the coach. "I think most people in the stadium have seen that every single person in our team tried to win the game with everything they had.

The fact that the team still lost was due to the corner-kick situation in the 30th minute, when Lucas Alario headed home to make it 1-0, after Jean-Philipp Mateta missed the ball, Robin Zentner still got his hand to it, but only once the ball was behind the line. Apart from two long-range shots, this was basically the only chance that threatened the good Mainz defence. The back four did a great job defending off the ball. "If one had a problem, another was there. This was not the case in the last few weeks," praised the Mainz coach. "It must be in your head that it has to be like this all the time, otherwise you will very rarely take the points. We saw that clearly in the first three games.

No precision with the final pass

The opponent was also very stable and compact at the back, therefore the Mainz team rarely got in a dangerous area. "We had a few good passages of play and forced them to throw themselves around in the penalty area. It may sound funny, but our plan also worked partly in their half of the pitch. Leverkusen has incredible quality in their defence. For us at Mainz it's not easy to just say let's create a game plan and everything will work out. In the Bundesliga there just isn’t free space to play on. We found the few spaces that there were," said Lichte. All that was missing was a bit of luck, but as the coach noted, also "precision with the final pass”.

What was remarkable, was that the Mainz players gained more and more self-confidence as the game progressed and personnel changed, built up pressure and would certainly have deserved a lucky moment to balance out the situation. "We have to process this game and see why it was not enough to put away the big chances, why we got the set piece goal against us. We'll see what we did well defensively, that we hardly allowed any chances against a team like Leverkusen," explained Lichte. Then we will look at the Gladbachers and develop a plan "to use the enthusiasm and commitment we had on the pitch today to get something next week.” Borussia visits the arena on Saturday (3.30 pm CEST).