LICHTE: "WHY DID THIS HAPPEN?" 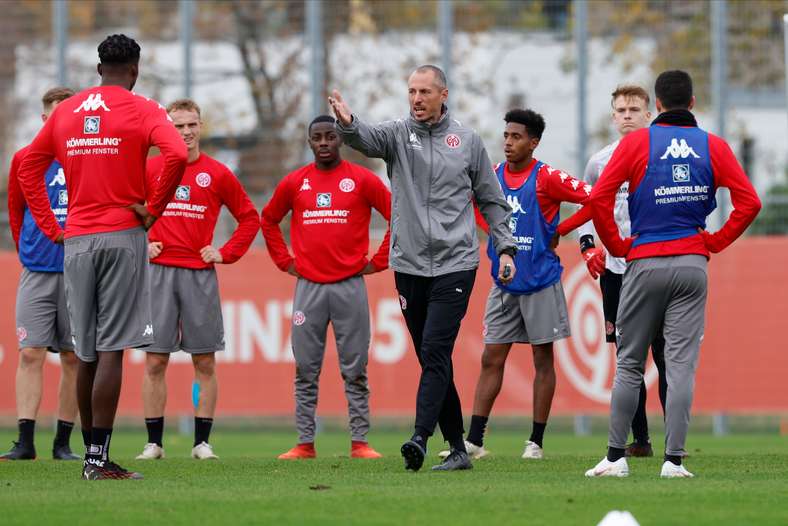 The defeat against Augsburg and especially Mainz’s first-half performance, are the main topics in the week before the battle of the teams at the bottom. Mainz 05 face Schalke 04, who are also without a win after six games on Saturday (3.30 p.m.) at the OPEL ARENA. “So far, the approach has been with discussions and video analysis to highlight the problems and deficiencies which led to the frustrating 1-3 loss", said Jan-Moritz Lichte after the first training of the week.

The morning session at the Bruchweg took longer than usual because both the video analysis of what had gone wrong at the weekend and the resulting work on the training ground were very extensive. Lichte and his co-trainer Michael Falkenmayer have added support this week: U16 coach Patrick Kaniuth has been named as an assistant coach. "We definitely need him in the area of individual player analysis, otherwise we won't have enough with just two coaches and our video analyst during the week," said Lichte. "He is also an important link to the youth team for our top young talents. With our large squad, the division is now better on the training ground than before with just two coaches. Patrick will be involved in all areas".

Full throttle when the whistle sounds

“Of course, we are also involved in reviewing the current situation, which began on Sunday, one day after the performance against Augsburg. This was done in a highly self-critical manner on the part of the team”, as Lichte confirmed. "It wasn't that I was giving a speech, but that I wanted to know from everyone: why did that happen? Then you realise that the players didn't intend to give the impression that there was a sprint missing, that they didn’t push as hard, that we were not on schedule. The players said: In principle, they know all this themselves and of course they don't want to look so bad," explained the Zerofivers coach, who also sees his players as being responsible for themselves. "It's up to each individual to question all this. We won't be able to develop the perfect daily schedule for each player individually. Everyone has to make sure that they can go full throttle as soon as the whistle sounds.”

This was not the case in Augsburg. "If I always knew this and the players always answered it very clearly with why things didn't work, it would be relatively easy," said Lichte. "That's how we approach things. During training I have the feeling that we are self-critical, work hard on it, and everyone is working together. And that in turn gives him the feeling that he can make a difference in his daily work.

The Zerofivers coach has chosen the analytical approach: recognising issues, discussing them together, working on them in training using appropriate methods instead of with threats and pressure. "The players react to me," says the coach. "Unfortunately, in the first half of the game, it was not in the way I’d imagined. We cannot be satisfied with this first half. I want to find out why it was like that and how we can make it better. I think it would be wrong for me to emotionally yell at anybody."

Halves like these, as the team has delivered often in the past, must be prevented in future. A topic that was also the subject of a spontaneous discussion with the fans who came to the Bruchweg on Sunday after training. A constructive chat, as Lichte stressed. "I found the fans very clear in what they wanted to tell us. Also in the way it was done, completely fine. I wouldn't interpret it as a protest after a game, but as a constructive exchange. But the things that upset the fans are similar topics that we have already worked on in training before.

Which is why everyone has the feeling that there could actually be more. "This feeling alone is already a problem. The fans have pointed out similar points to us. I hope that the players will now do something with this information”. On Saturday against Schalke for example.