Lichte: Ready for the challenge

Achim Beierlorzer’s successor led his first training session on Tuesday as head coach and stated his expectations of the players at the subsequent press conference. 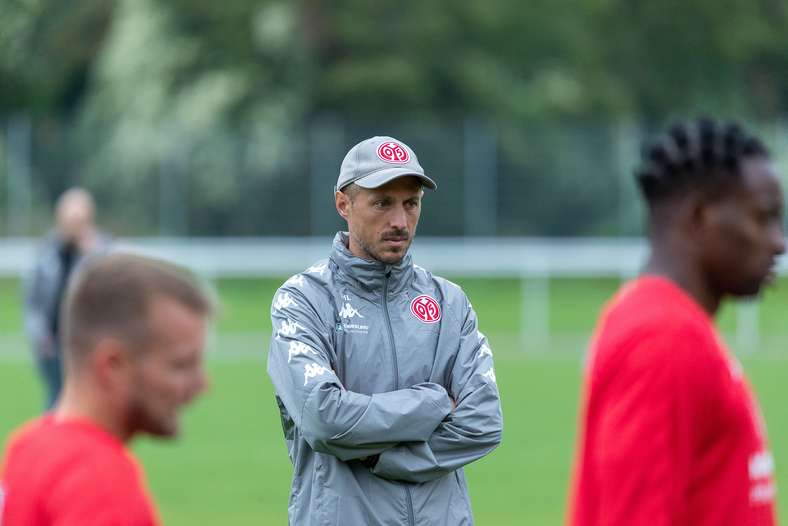 It’s a new era at 1. FSV Mainz 05. New head coach Jan-Moritz Lichte took charge of training for the first time on Tuesday morning, one day after Achim Beierlorzer’s departure. The coach, who was an assistant manager at Mainz for the last three years, is preparing the side for Friday’s trip to Union Berlin.

It’s unsurprising that Lichte was a little nervous during his first public appearance as head coach of a Bundesliga side; the preceding week was an eventful one. Yet Lichte spoke clearly and calmly in the digital press conference alongside Rouven Schröder, going into detail and using humour in good measure. “I think we’d all like Kloppo to turn around and say he’s had enough of Liverpool, had enough of winning and wants to come back. I’d be the first to say I’ll happily step back and watch,” said the 40-year-old.

But Jürgen Klopp doesn’t look like returning anytime soon, and Mainz’s sporting director has put his trust firmly in Lichte to get the team going again as head coach. “When you see how Jan-Moritz goes about things, it’s clear that he’s ready to take the next step. We’re convinced he’s the right man. It’s exactly the right time,” said Schröder, who is adopting a role closer to the team to support the coach. “I want to be there for Jan-Moritz when he wants my opinion. The group needs to feel that we’re all in one boat. The last week has just proven that we can only do it together,” explained Schröder.

Lichte himself describes the job as a challenge after recent events. “I want to succeed through hard work. I'm surrounded by people with great quality who I can rely on. We know what we need to do with the team. That’s how we’ll get back to doing the basics on the pitch that the club, fans and members all want to see.” After starting the season with two defeats and the players’ refusal to take part in training, the coach thinks that the players must take some responsibility. “I think that the team have made themselves appear to be difficult to handle. I expect them all to do their best for the team and for each other. That is their task. They’ve made their own pressure.”

At the beginning of training this morning, Schröder spoke to the players and outlined the current situation. “I shared with the team what I expect from them on a daily basis in training, and what I will be looking out for in everyday life and in our work together,” explained Lichte, whose main focus initially is preparing for the upcoming away match. “The situation at the moment is that the club is asking me whether I can imagine myself as head coach. And the answer is yes I can. I will naturally change some things because I’m a different person and I communicate differently. I hope that we can find common ground to implement these changes.”

The first step should be to reduce the amount of goals being conceded, “because otherwise we’re not going to win many games. And when that’s the case, it creates a bad atmosphere, no matter how much you invest. We have to develop a defensive structure that allows us to win, even if we only score once or twice in a match. It involves the whole team defending together to win the ball back quickly and efficiently. We can score goals through fast counter-attacking football.”

All of this, combined with the right tactics, is the basis of a functional matchday approach. “What we’re striving for are the right foundations, passion, and dedication. Giving this club what it needs can only be achieved with the right tactical ideas and with a structure in which the players can give their all,” explains Lichte. “You might have done 300 sprints, run 120 kilometres, given it everything physically. But if the tactics aren’t right, then it may be that you fall short and look like you haven't given it your all. That’s why we need both in order to achieve our goals. Passion, dedication, and leaving it all out on the pitch for this club, its members, and of course the fans.”