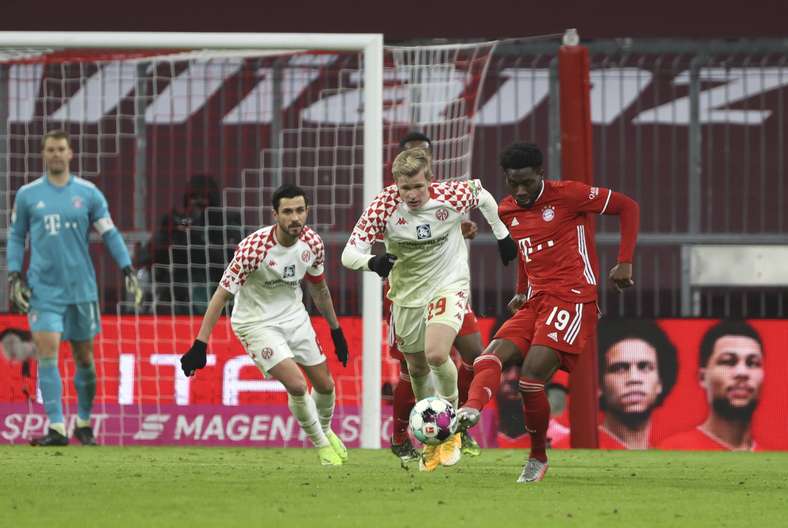 Leading by two goals, twice beaten by the post and ultimately also by FC Bayern Munich: The Zerofivers return to the Bruchweg after the first game of 2021 with a clear 2-5 (2-0) defeat at the hands of the champions. Nevertheless, the performance at the Allianz Arena on Sunday evening, in addition to the convincing debut of home-grown Finn Dahmen, certainly offered reasons to move into the fight for relegation with justified confidence in the coming months. Mainz's deserved lead at the break - Burkardt and Hack with the goals - was turned around after the restart by Joshua Kimmich, Leroy Sané, Robert Lewandowski (2) and Niklas Süle.

Interim coach Jan Siewert made four changes from the cup defeat against Bochum. Robin Zentner, who was suffering from back problems, was replaced by Dahmen, who made his Bundesliga debut. Luca Kilian (stomach bug), Moussa Niakhaté (suspension) and Karim Onisiwo were replaced by Phillipp Mwene, Daniel Brosinski and Burkardt.

Siewert had announced before the match that he would by no means limit himself to defensive work, and the team followed the coach's words with action right from the start: Less than five minutes had gone when a pass from Jean-Paul Boëtius into the lane reached Burkardt, who, accompanied by Jerome Boateng, headed towards Neuer, but failed from ten metres due to a strong save by the German number one (5'). On the other side, Dahmen made his first Bundesliga save a minute later, when he safely parried Lewandowski's shot (6'). The Zerofivers kept the early minutes open and had their second shot through Quaison, but again Neuer was on hand to save (7'). An entertaining game developed with chances on both sides. Sané came very close to scoring the first goal when his shot, deflected by Jeremiah St. Juste, was caught by Dahmen just before the line (8'). In the 16th minute, Mainz were lucky that Corentin Tolisso did not fully catch the ball after a cross from Serge Gnabry in front of the goal, but the Mainz team presented itself with the right body language in this first half and implemented the instructions of the coaching team in such a way that it was difficult for the champions to find space. Munich had to be on their guard again and again after losing the ball, because Mainz always countered quickly and gave the impression that they were capable of scoring goals. Although the hosts had more of the game, they were not able to dominate the Rheinhessen team, which was strong in running and fighting. But chances, such as Quaison's free-kick into the wall (20') or a 30-metre shot by Danny Latza (23'), once again underlined the offensive efforts of the Zerofivers.

While Bayern were not efficient enough in front of the Mainz goal, even with chances from Tolisso (27') and Sané (29'), it was in fact Mainz who finally scored the first goal: After a long ball from captain Danny Latza, Burkardt beat Boateng and gave Neuer no chance - 1-0 (32')! While Dahmen prevented the equaliser in the 36th minute with his first brilliant save against Lewandowski, when he was able to clear the Pole's shot from 14 metres with one hand for a corner, Mainz struck for the second time before the break. A Brosinski free-kick from midfield reached Hack, whose header nestled in the far corner (44'). Shortly before, Quaison had missed a great chance after Hack had won the ball against Sané in midfield, served the Swede with a great pass, but Neuer had been able to clear the shot with his fingertips for a corner (41'). The 2-0 lead, which was not undeserved, lasted until the break. The highly focused, disciplined visitors had at least taken the Bavarians by the scruff of the neck during the first 45 minutes.

Latza misses chance to make it 3-0, then Bayern turn up the heat

The second period started with a bang that should have meant it was 3-0: Quaison put a long ball into the back of the Bayern defence to Latza, who had an open chance in front of Neuer, but still failed due to a reflex save by the goalkeeper, who was able to direct the ball to the post (48'). Especially disappointing from Mainz's point of view, because Bayern did better a little later and then really started to roll. Gnabry's cross was extended by Lewandowski to the far post, where Kimmich gave Dahmen no chance (50'). And because Mainz stood deep in the first few minutes after the restart, in contrast to the first half, and were unable to find a foothold in the game, the two-goal lead was gone after 56 minutes. Sané moved inside from the right and the Zerofivers were too passive, so the German international could easily put the ball into the net from 22 metres to equalise. Nevertheless, Mainz remained in the game and could have promptly taken the lead again: Quaison's attempt, however, only landed on the lower edge of the crossbar, from where it bounced back into play. It remained a gripping encounter, which Bayern seemed to have turned around a little after Leandro Barreiro had scored an own goal. Before that, however, passer Alphonso Davies had been narrowly offside and the score remained 2-2, at least until the 70th minute when Thomas Müller headed a corner to Süle, whose deflected finish from ten yards went just inside the post. The hosts had turned the game around and were now clearly setting the tone.

Siewert reacted and brought on Onisiwo for Boëtius. Could something happen here again?  The answer came just a few minutes later. After Barreiro had given Gnabry a penalty, Lewandowski kept his cool and scored from eleven metres to make it 4-2. A little later, Dahmen prevented Davies from scoring a fifth goal in a game that was open for a long time, but was decided at the beginning of the final phase. Neither the substitutions of Jean-Philippe Mateta and Kevin Stöger for Brosinski and Burkardt, nor the attempt by Quaison (80'), which just missed the target, changed anything. Instead, it was Lewandowski again who made the final score, putting a Müller cross over the line from eight metres (83') and thus putting the finishing touches to a strong second half for the Munich side. What would have happened if Latza had scored goal number three for the red and whites shortly after the restart remained a purely hypothetical question. The final phase did, however, have one side note: Merveille Papela, another homegrown player, made his debut in the top flight.

While the hosts regain the lead in the table from Leipzig with the win, the Zerofivers are still 17th and will face Eintracht Frankfurt in the Rhine-Main derby next Saturday afternoon at the OPEL ARENA.