Latza: "It will be a learning process”

The Mainz captain is hoping to extend the gap to the relegation zone with his side, but knows that the focus over the coming weeks will be on the players for many reasons - “We bear the responsibility” 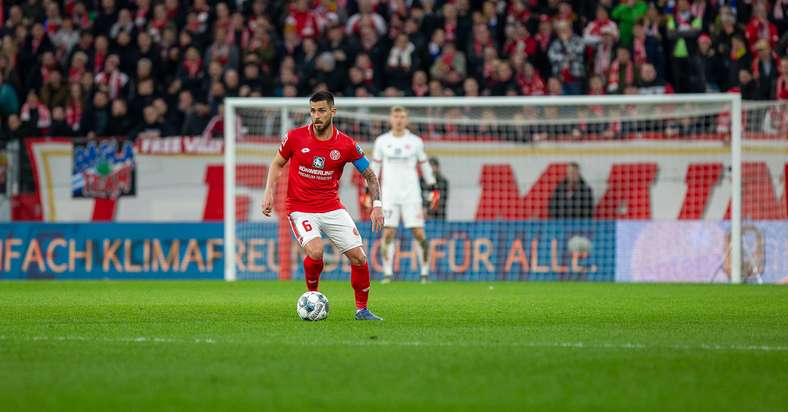 The captain and his teammates are preparing to face Köln on Sunday.

“You can’t prepare for everything,” is Danny Latza’s mindset ahead of Mainz’ match against 1. FC Köln on Sunday afternoon (15:30 CEST). It will be the first of nine matches to be played behind closed doors before the end of June. “I think whoever is able to come to terms with the circumstances the best will be successful in the end,” he said. Despite feeling the excitement of finally being back on the pitch, the 30-year-old is well-aware of the burden of responsibility that has been placed on both him and his teammates.

Mainz05.de caught up with Danny Latza on Tuesday afternoon, as the captain was making his way back to the team hotel following a training session at the Bruchwegstadion. The team has been quarantined at the hotel since Monday, as mandated by the DFL. Latza was coming from the team’s first training session of the week, and still has to get used to his new normal. “You have to pay attention, otherwise you’re likely to start heading home, like you usually do,” he said with a laugh. Despite the current situation, the captain has not lost his sense of humour. After all, what matters now is “making the best of the situation,” he said.

For the midfielder, being in the Favorite hotel in Mainz is a bit like “a small training camp, even if everything is slightly different than usual.” Instead of a self-serve buffet like usual, the team’s meals come already plated. The team do not eat as a group, but instead in staggered windows. “You’re paying attention to every detail. We’re keeping our distance and use our own cars to commute between the hotel and the Bruchweg,” he said. Of course it feels strange, said Latza. However, he is able to draw some positives from the situation. “It feels a bit strange, but it’s necessary given the current situation and based on the plan developed by the league. As a team, we’re definitely able to benefit from this week, as we have video analysis sessions and can focus entirely on the task at hand.”

Extending the gap to the danger zone

Last week, the Zerofivers received confirmation that their season would resume in Cologne. Like his teammates, Latza is hoping to get off to a strong start this weekend because “we want to extend the gap to the relegation zone as quickly as possible.” With 26 points, Mainz are currently four points clear of the danger zone ahead of Saturday’s trip to Müngersdorf, where the team will stay ahead of Sunday’s match. The hotel is located near the RheinEnergieStadion, and meets all the hygienic standards required in order for the Zerofivers to prepare for the task at hand.

Latza can feel that pre-match excitement levels are rising. “I’m excited that we’re able to get back to doing our jobs," he said. "It’s a privilege and we’re grateful that the government approved the plan allowing us to return to playing. Both within the team and based on the work being done on the pitch, you can see that that competitive mentality is coming back.” However, the captain is not expecting it to be business as usual. “On day one, we will get to learn what it’s like to play behind closed doors and what it’s like to be in the stadium with these restrictions in place.” At the same time, the Zerofivers have used this past week to prepare for the matchday conditions by suiting up and playing 11 vs. 11 in both an empty Bruchwegstadion and the OPEL ARENA. “It will be a challenge to be fully focused, but we cannot think about what’s happening outside of the game. When we kick off, we can’t delay, we need to face it head on. I hope that we can get into some kind of flow then,” Latza said optimistically.

The captain has also acknowledged and understands the criticism surrounding the decision to resume play in the midst of the coronavirus pandemic. “Of course, given that many people are still in lockdown whether it be in their personal lives or at work. It’s about ensuring you can survive. That’s why it’s crucial that we continue to adhere to the guidelines and don’t slip up. We bear a lot of responsibility and all eyes are on us, now more than ever. We must uphold the standards that have been set out. That’s something that’s new for us and it will be a learning process in order to keep your emotions in check on the pitch and to find different ways to celebrate, to keep your cool,” Latza said.

“Additionally, we can only hope that the fans are able to get some joy from watching on the weekend or during the week and by following the sport that we love, even if they will only be able to do so from home for now," Latza said. "We all play football because of the atmosphere in the stadiums and are all hoping that we don’t have to go without it for much longer.”