Latza: "A captain needs to be on the pitch"

The Zerofiver regular is on the way back to full recovery after his back injury, and wants the team to take charge in their battle against relegation. 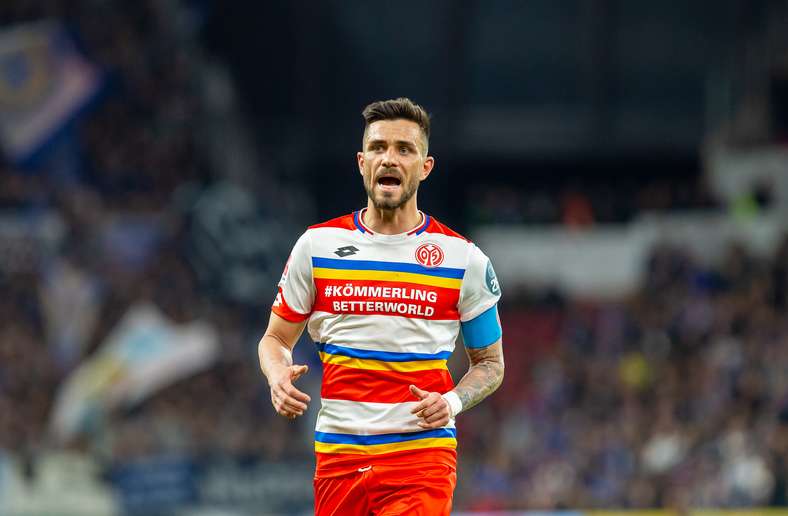 Danny Latza was proud to accept the mantle of becoming the new Mainz 05 captain in the summer, replacing Niko Bungert in the role and at the time being heavily involved in the Mainz team. The plan was to bear that responsibility and lead the team, but things went awry at the start of the season. Latza suffered persistent back problems at the start of the season, the root cause of which turned out to be because of a herniated disc, diagnosed in December. Only now has the captain become able to return to the pitch and to the starting XI. “I can play freely and without restrictions to my movement again,” said the 30-year-old, but the German admits that he does not think of himself as being at 100% fitness yet.

Latza initially did not make the dream comeback he had hoped to have made when he returned against Bayern Munich. By the time the captain came on, his side were 3-0 down by the 32nd minute. But after the third goal Mainz steadied the ship, and had chances and even scored a goal against the Bundesliga record champions. Latza was in the starting XI again when Mainz made the trip to the capital to record a 3-1 away win over Hertha Berlin, and he was again present when Mainz got their second clean sheet this season against Schalke. This means that Mainz’ normally shaky defence has conceded only one goal, an own goal at that, in their last 238 minutes of Bundesliga action. Latza has proven to be an important factor in the team’s defensive stability due to his versatility in midfield and will be hugely important in the fight against relegation.

Praise from the manager

“Danny is our captain and knows his role at the club, even though he was injured,” the coach praised. “He has everything that I want to see in a captain,” Achim Beierlorzer said. “Everything is always based on performances and Danny has fought his way back into the starting XI.” Latza now wants to move on and forget the first half of the season (“I was still feeling the pain of my injury, but I also knew that as captain I felt responsible towards the welfare of the club”) and fully fulfil his role as a conduit between the coach and the dressing room. He also believes that he is on the right track physically. “First of all, it is my firm belief that a captain needs to be out on the pitch with the team. I want to be there for the boys. Despite at some point me not being ready to start the games, I’m doing very well now. But it’s all about making a gradual improvement. It’s very important that I can make movements without feeling pain.” With his experience, Latza wants to serve as a role model for young players in a relegation battle. “I think there are some of the lads who look up to me already. Leandro, for example, is someone who I can imagine taking a leadership role here himself at some point in the future. He’s that type of guy. I just want to help everybody in our struggle with my presence and my guidance. Everyone will fight hard to work together. If we continue in this vein of form, we will be able to stay in this division. Everyone knows this deep down.”

The captain, who could have capped off his strong performance against Schalke with a goal in the 43rd minute, was not satisfied with the result. “Of course it would have been a nice feeling to score against the team I was with as a kid, because I could have rubbed it in next time I was at home,” laughed Latza. “I saw the defender out of the corner of my eye and hesitated, so I didn’t hit the ball as hard as I could have.” But that miss is long out of the captain’s mind. Since the birth of Latza’s first son Alexander in April 2019, Latza feels his perspective on football and life has changed.

“I enjoy being with him and I think I’m much less stubborn because I have a new priority in life. If after a game in the stadium you hug your son and he smiles at you, you forget everything else at that moment,” explains the proud father.

From a sporting point of view, there is of course still only one priority in Latza’s mind: Mainz. And the man from Gelsenkirchen has what he believes is the recipe for escaping the relegation battle. “We don’t always need to play shining football if we have the right amount of commitment and passion. The fans want to see that above all and we understand that as a team. When we’re on the pitch and the fans are at our back, then we’re playing for them too. It’s a huge effort for us to get more heavily invested in a game, especially if we’re struggling. But we can gain a sense of security and self confidence by following this method!” Tactics like these may be seen against Wolfsburg on Carnival Sunday as Mainz try and take something from that match. The match immediately precedes the Monday Carneval procession, which the captain is looking forward to. “Carneval is like a religion for the people here, you can feel it in the air. As a team we like to be a part of the community event”.