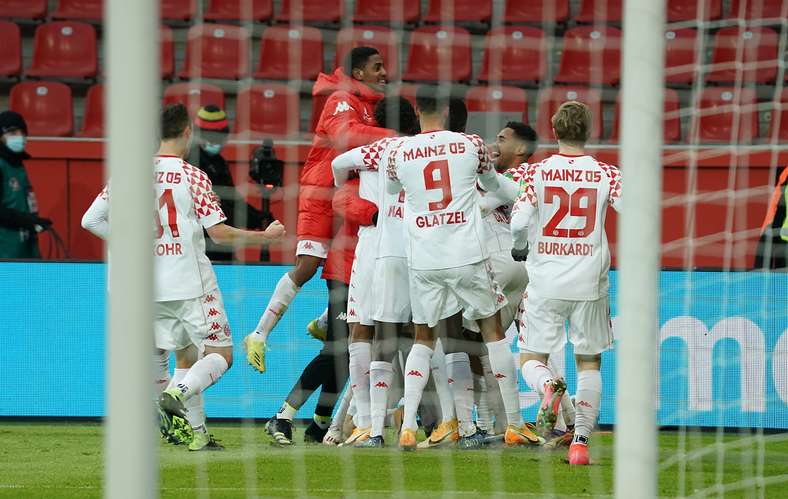 What a heart-stopping ending, what mentality, what team spirit! Mainz 05 fought their way back against Bayer 04 Leverkusen in the final minutes of a match that was already thought to be lost and showed once again that Mainz are still a force to be reckoned with in this relegation battle. After Lucas Alrio had given Bayer the lead in the early stages, Patrik Schick seemed to have decided the game as he made it 2-0 six minutes before the end. But Mainz continued to believe in themselves after an initially unsuccessful attacking performance in the second half and, in the end, deserved the 2-2 because the two subs Robert Glatzel and Kevin Stöger struck. Sporting director Martin Schmidt was highly satisfied with the performance after the final whistle speaking to "Sky": "That was a feat of strength, a top performance from the boys. The substitutions were more than enough for the coach today. It feels like a victory when you come back from behind against an opponent like that. I told the boys: 'Look forward to the return trip'."

Bo Svensson initially trusted the same team in Leverkusen that had defeated Union Berlin last weekend. Tactically, the visitors took the same approach as in the previous weeks and used a 5-3-2 formation against the Europa League participants.

The match started very cautiously. The hosts initially lacked the means to advance into promising positions against the hard-hitting Mainz team. But Bayer should have struck with the first chance in minute 14 - out of nowhere. After a Mainz free kick, the Werkself switched quickly, Moussa Diaby's cross found Alario, who escaped from Bell in the centre and slipped the ball through Zentner's legs - 0-1 from Mainz's point of view (14'). But Mainz's answer followed promptly and almost brought the equaliser when Karim Onisiwo failed with his head at the far post after a cross by Danny da Costa (16'). While Bayer were in charge, Mainz made a good impression defensively despite the deficit, allowing little to happen and repeatedly making tackles. An attempt by captain Danny Latza in the 20th minute of the match landed just over the goal, while Robin Zentner made a safe save from Leon Baily (22'). In an open exchange of blows, in which the hosts clearly had more ball possession and the Zerofivers fought back, Leverkusen deserved the narrow lead. First, Mainz's number one defended a shot by Kerem Demirbay (30'), while Diaby did not aim accurately enough from around 20 metres 60 seconds later (31', over). Five minutes before the break, the Rheinhessen had to worry again when a header by Bailey landed on the crossbar (40'). A little later, referee Guido Winkmann called for half-time.

Subs run on, Schick scores, and then it gets wild

While the Zerofivers came out of the changing room unchanged, Niklas Lomb replaced the injured Lukas Hradecky between the posts for the second half. As in the first 45 minutes, there was not much happening in the BayArena until Leandro Barreiro almost scored his second Bundesliga goal twice within 60 seconds. First, the homegrown player put a great cross from da Costa over the goal with his left foot (56'), before the Luxembourger shot just wide of the left post after a return from Ádám Szalai (57'). Mainz had come back in this competitive match, were close to an equaliser and continued to press against the hosts, who did not find their way back into the game at all in this phase. But Mainz lacked fortune with the next double chance, after da Costa had again set the ball up, but first Onisiwo failed to hit Lomb, while Latza did not fully catch the ball on the follow-up shot (65'). And the game went on in only one direction. First, Edmond Tapsoba blocked Dominik Kohr, and when the ball was finally in the Leverkusen box, the goal did not count because Moussa Niakhaté had touched the ball with his hand (71').

The inconsistency in the use of chances seemed to take its revenge after 84 minutes, when Schick seemingly sealed the game after a counterattack. But whoever thought that the Zerofivers would hang their heads was deceived this afternoon. In a completely crazy final phase, the Mainzers kept a clear head and in the end actually earned a very valuable point! Svensson had shown a happy hand shortly before and brought in Glatzel and Stöger, the two goalscorers. First, the new signing scored his first Bundesliga goal after Niakhaté's cross (89'). And in the second minute of injury time, Stöger put the crown on the madness, when he pushed the ball over the line from ten metres, because Sven Bender had not been able to clear properly beforehand - 2-2 (90+2'). What a comeback! A short time later it was over and the Rheinhessen were jubilant after this crazy game on Carnival Saturday. All in all, the Zerofivers deserved to take a point from Leverkusen and have 14 points from 21 games to their name before the trip to Mönchengladbach next weekend.