Language “an aspect of identification and integration”

New kit, togetherness and a lot in store as pre-season begins 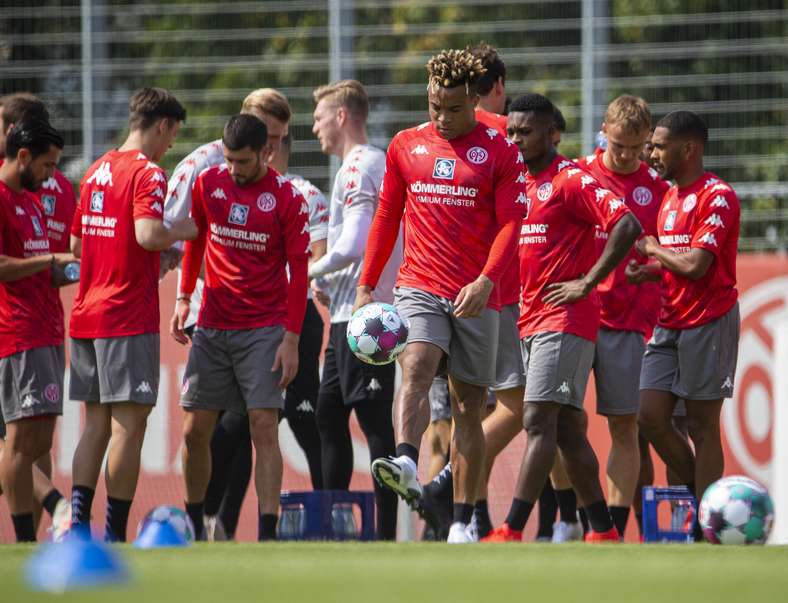 Mainz players returned to training like excited schoolchildren who could hardly wait to get going. “It is often said that the start of pre-season is like the first day of school,” said sporting director Rouven Schröder after the team’s first 90-minute session. Schröder was joined by head coach Achim Beierlorzer in a virtual press conference, and the pair discussed the positive atmosphere that they want to instil among the group in the coming weeks.

“New kit partner, new colours and a new sense of togetherness,” said Schröder after the first session, adding that the team is going to make its mark on the new season. From the very first minute this sense of togetherness was evident to see among the squad, which is currently made up of 33 players. There was applause after good work, dances after successful movements and all in all a great atmosphere across the whole group.

There are a lot of changes ahead of the new season. The players were kitted out in the new training wear produced by new partners Kappa with red tops complimented by grey shorts. The coaching team also get to enjoy a new colour, switching out their old blue kits for some light grey threads. In addition to the kit supplier, there are even more changes. Head coach Beierlorzer, in addition to his previous office, now has a second home after taking over the office vacated by former assistant coach Niko Bungert, in a change aimed at bringing the coaching team closer together. “We all want to work on the development of this team. We’re a tight-knit group.”

Allowing us to grow closer together

Bungert is no longer present in his former role, having taken up other responsibilities at the club. However, there are no plans to fill the vacancy left by Bungert with a new coach. “After a lot of discussions, we feel capable of taking on the responsibilities which Niko did so well together as a coaching team. This will allow us to grow closer together,” explained the head coach.

The coaching team will be supported by veteran duo Stefan Bell and Daniel Brosinski, who each recently renewed their contracts with the club. The pair will “take on certain responsibilities left by Niko,” explained Rouven Schröder. “They have both been here for a long time and know what Mainz 05 stands for. They can relay certain things to the rest of the squad, as an extension of the coaching team.” Certain things, which will aid integration and build team spirit. “We want to create a positive atmosphere ahead of the new season,” said Beierlorzer. The sense of community is the first priority and players met up to eat together ahead of the start of pre-season. “We have also relayed to the players that one aspect of integration and identification is the language,” said Beierlorzer, who as a result “made a small change” in the club’s internal communication methods. “We will now only correspond in German, rather than translating into English, French or Spanish,” explained the head coach.

The 52 year old has his team’s pre-season training planned out. “So far we’ve seen a high level of concentration and enthusiasm, and want to use the next four weeks to work specifically on the things that we think are important for our play.” The analysis of the previous season has produced a lot of results. “We’ve found the way that we want to play. We want to keep improving on that and will use our time intensively to do so.”

One area of high importance is athleticism. “We want to improve our running performance. Our focus is on continuing to improve both in and out of possession,” explained Beierlorzer. “Compactness, ball-orientated switches, and aggressive defending – all of these things together in a well-orientated team.” Beierlorzer also expressed the obvious importance of reducing the amount of goals conceded, but also of the team’s own attack, depth, tempo and build-up play. “There are a lot of things that we are working on bit by bit during pre-season, and will continue to work on during the season. You are never completely ready after the end of pre-season; it’s an ongoing process,” explained the head coach. “At the end of the season our compactness was good, we were aggressive in duels and we ran hard – that is our style. Our task is to to do all of that cohesively as a team.”