“It’s not just handed to them” 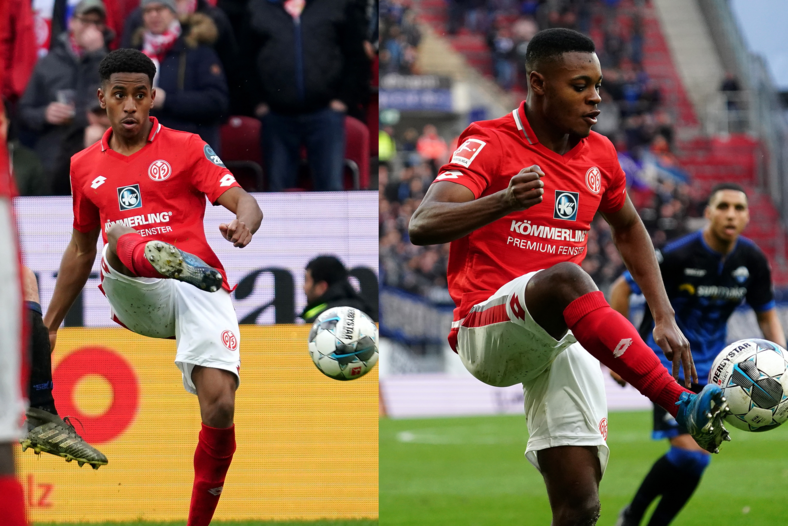 The midfield duo delivered a strong performance against Paderborn.

For the first time in Mainz’ Bundesliga history, the club had two youth academy products at the centre of the Zerofiver midfield. In the 2-0 win against Paderborn, Ridle Baku (21) and Leandro Barreiro (20) lined up as the two defensive midfielders in Achim Beierlorzer’s 4-4-2 formation and played a large part in securing the win for the Zerofivers.

According to the head coach, this was not something that had crossed his mind when he looked at the starting line up. “This is one of those things that’s the result of our training sessions and our current situation,” he said. Both players had delivered strong performances in past games, which informed the coach’s decision-making. “Of course, this is also something important for the club. We need young players, and it’s important that we continuously promote talented youngsters through our internal ranks. There’s no better way of doing it. In this way, it also rewards the work done by our academy. But, it’s also clear that the boys need to do their part – it’s not something that’s just handed to them,” said Beierlorzer.

From central to defensive midfield

Baku (born in 1998) is a regular starter for the Zerofivers and has changed positions quite a bit already. Under Sandro Schwarz, the Mainz native lined up in centrally as part of a diamond midfield. Beierlorzer then employed Baku in midfield, as well as a right-back and now, finally, as a defensive midfielder. The U21 international had a spectacular start to his Bundesliga career, scoring a goal on his debut in a 3-0 win over RB Leipzig in April 2018. A week later, he netted the opener during a 2-1 win in Dortmund, laying the foundation for Mainz securing another season of Bundesliga football. Baku has been a firm part of the team ever since.

Barreiro (born in 2000) became part of the first team at the start of last season, and made his Bundesliga debut in a disappointing 5-1 defeat to Leverkusen in February 2019. He played mainly for the club’s U19s in that season. This season, the Luxembourg international was an unused substitute for much of the season, but worked hard to earn his appearances and has been a regular part of the squad since the 3-1 loss to Bayern.

Both players share a willingness to give it their all, as well as innate speed and a similar playing style. Barreiro is the one willing to enter into any challenge, as well as being the one to win the ball and close down the spaces. “He’s one of our top players in terms of his endurance,” said Beierlorzer. Baku is equally as strong in challenges and at winning back possession. He also has a solid spatial awareness, is strong on the ball, as well as being quick and being strong at both passing and shooting.

Against Bayern, it was Barreiro who impressed despite the defeat. “We brought him on once in Augsburg, but it didn’t work there just yet. During training, we kept seeing how well he was doing. That’s how a player wins back trust,” said Beierlorzer, and added “I hope that he continues to act this way.”

Drawing the attention of the coach

Against Paderborn, the duo were able to work well together that they could be candidates to feature again against Fortuna Düsseldorf this weekend. “It’s definitely a possibility,” said Beierlorzer, who also pointed to the tough level of competition within the squad. “I can’t announce the starting line up on Wednesday already. Then the others will think to themselves whether or not they can take it easy already.” After all, high-performance sports demand consistent performances. “Those who have done a good job up until now, need to prove that during the week. Those who are lagging a bit behind need to see to it that they push their way to the front and set the pace. It’s been proven often enough recently that it’s possible,” said the 52-year-old.

Last weekend’s win proves how strong those players on the pitch were. Baku and Barreiro won a number of challenges, and led the way in terms of interceptions. They both covered a distance of nearly 12 kilometres during the match. With 31 sprints, Baku was just behind Karim Onisiwo and Paderborn’s Kai Pröger (both 32). “Playing in a way that draws the coach’s attention - that’s the challenge at hand for everyone in the squad. If that’s the case, then we will have a high performing squad and the necessary energy,” said Beierlorzer.