“It’s cool to be back out on the pitch again”

The first team have been back training at Bruchweg since Tuesday. Florian Müller spoke to mainz05.de about resuming training, taking part in eSports and Mario Kart causing arguments amongst siblings. 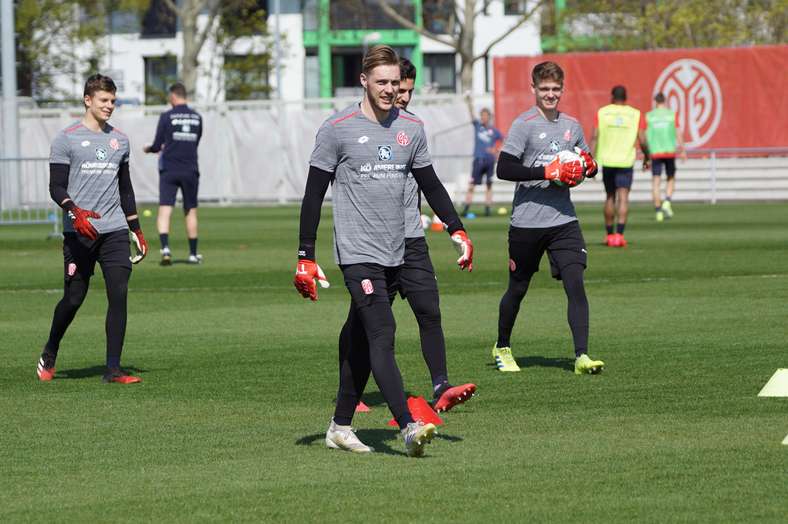 The Mainz players returned to the training ground at Bruchweg on Tuesday. Florian Müller was pleased to be back, even though he would understand the decision to end the season prematurely due to the coronavirus if it is made.

Hey Flo, how does it feel to be back training?

Müller: “It’s definitely cool. I hadn’t had a ball in my hand for three weeks, so I was glad to be back training again on Tuesday.”

How are the social distance regulations affecting training?

Müller: “It’s quite unusual. There are a number of requirements for us that ensure we keep a certain
distance. We are using five of the six changing rooms for example and we don’t shower at Bruchweg – we simply get changed and go straight home.”

Training resumed in some lovely weather too.

Müller: “It was tough (laughs). It was so warm! I think it was 20 degrees colder the last time we trained, so it was a real change. We were also quite knackered today because of the weather.”

The break in the season has come at a bad time for you personally. You came on in the last Bundesliga game against Düsseldorf at half time for Robin who went off injured (1-1), which was the last match before this enforced break.

Müller: “It wasn’t great timing, but not just for me. I think everybody would have liked to play on, but you have to say that it was the right decision to stop. Health is the most important thing and you have to prioritise that over your personal aspirations.”

What did you get up to at home?

Müller: “It was quite boring at times, but I tried to do a lot of things. I obviously did all the training sessions that our coaches gave us, and I also went out a lot for walks with my girlfriend. We also started a spring clean here (laughs). It’s something you end up doing when you’re spending the whole day in the flat.”

Let’s speak about your participation in the eSports world. You played with Julian Greis in the Bundesliga Home Challenge on Saturday. How did that come about?

Müller: “I think Brosi was partly responsible for that. He played against Dortmund the week before and when he was asked who could play the next game, he said my name. Darius, our team manager, then asked me if I’d play. It was definitely a lot of fun, even if I had a very tough opponent.”

What was it like to play with yourself on the game?

Müller: “It was quite strange for me at the beginning, but with time I was just another player like anyone else. After a while I didn’t even notice that it was my virtual self making the saves.”

Do you play regularly?

Müller: “I actually don’t play that much FIFA. I play NBA a lot. Danny, Phillipp, Brosi, Jannik Huth, Fabian Frei and I used to play a lot back in the day.”

What games did you play a lot as a child? Did you have NBA back then?

Müller: “I didn’t actually play that much back then. I did play NBA and FIFA though, as well as the classics like Mario Kart and Mario Party. I have a twin sister and we often argued over games (laughs). I don’t think computer games were as big a part of my life as they are for children nowadays though.”