"It was one hundred percent a penalty"

All the post-match reactions from Mainz' 1-0 home defeat against TSG Hoffenheim. 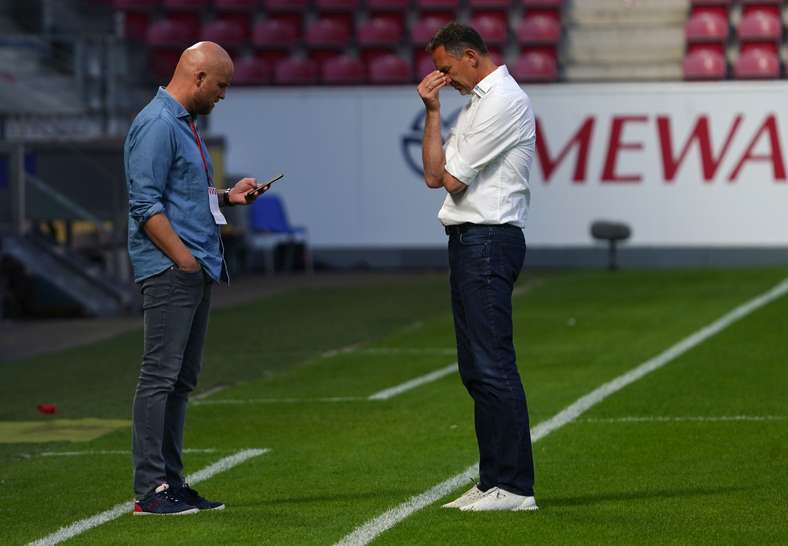 Mainz were unable to get a much-needed win on Saturday afternoon.

TSG 1899 Hoffenheim were the luckier of the two sides on Saturday afternoon, taking the three points from the OPEL ARENA. It was an action-packed game, containing Flo Müller’s penalty save, the decision not to award Mainz a penalty for a foul on Taiwo Awoniyi , who had also seen his goal disallowed. Robin Quaison was also unlucky not to score, after his free kick bounced off the woodwork. There was therefore great disappointment in the Mainz ranks at the final whistle.

The post-match quotes from #M05TSG

Achim Beierlorzer: “We are really disappointed and annoyed. When you put in this much effort and play a feisty match, it’s hard to deal with a result like this one. We shouldn’t have lost this game and there were some difficult decisions that it will take until tomorrow morning to process. The whole situation with the disallowed goal was really unfortunate for us. I think that Baumann’s challenge on Awoniyi is a clear penalty. You need to get these decisions on your side in a relegation battle. Our objective remains clear, in that we need to keep this intensity and aggression as well as this self-belief, and press on into the next game.”

Daniel Brosinski: "We started well and we should have been ahead. Then we conceded a stupid goal and were chasing an equaliser in a tricky position. We can’t blame the referee’s decisions because we had enough opportunites to score.”

Taiwo Awoniyi: "It’s a big disappointment for us all. We should have decided the result in the first half, but we didn’t take our chances. In the end, that cost us the match. I don’t know if there was a foul in my goal, I only saw the ball going into the net. In Baumann’s tackle on me, it was 100% a penalty, as he didn’t get anything on the ball, but only touched my legs.”

Flo Müller: "The game was crazy, it was end-to-end. It was our fault that we conceded and it cost us the points, so it’s sad. Missing chances was a common theme in the match today and proved decisive.”