“It feels great to have picked up three points” 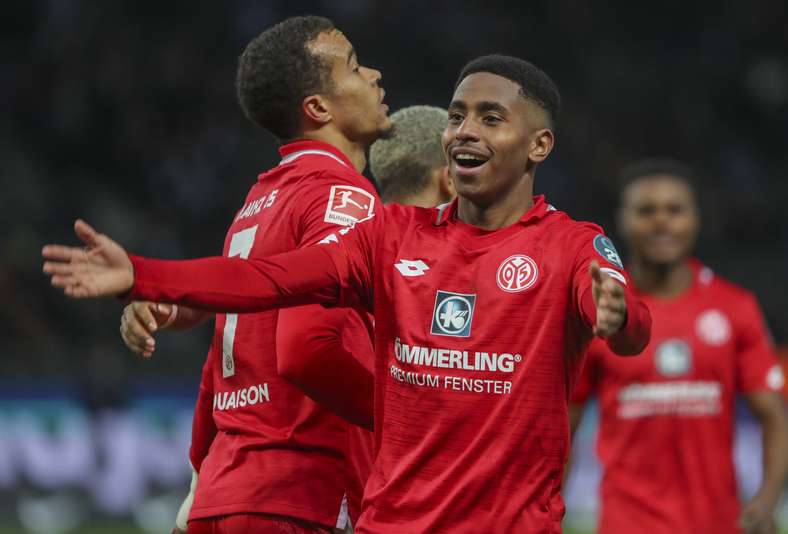 Leandro Barreiro and his teammates celebrate Mainz’s first win of 2020.

A strong all-round performance as well as a hat trick from Robin Quaison were all it took for 1. FSV Mainz 05 to pick up their fourth away win of the season. The Zerofivers took home a well-deserved three points after a 3-1 win against Hertha BSC. “It feels great to have picked up three points. In terms of their shape, desire and aggressiveness, I owe my team a huge compliment today. They did exactly what you have to do in this kind of situation on the road, gave it their all, and took home the win,” said Achim Beierlorzer.

After starting the Rückrunde with three consecutive defeats, the Zerofivers now have 21 points to their name and have built up a four-point gap to the relegation zone. “When you aren’t winning games, then it’s tough on everyone. You start longing for something positive,” said Rouven Schröder. Given the impact this can have on a team’s self-belief in their potential, the well-deserved win is of particular importance. “It shows that we have a good team. You can never count us out. We’re in the midst of our 11th Bundesliga season, and we want to stay here. We don’t need to hide and we’re far from done here,” said a clearly emotional Schröder, following FSV’s first win of the year.

“Achim prepared the team extremely well. They were meticulous, kept their shape, went into every challenge and worked to create chances while playing great team football, regardless of who was on the pitch,” said Schröder. The sporting director also praised Karim Onisiwo’s performance, who set up two goals off the bench in the final moments of the game. “It feels really good,” Schröder said.

Beierlorzer elected to go with a new formation against Hertha, choosing Danny Latza and Leandro Barreiro to start in central midfield as expected. However, the coach lined up his side in a 3-5-2 when having lost possession, a formation that was then easily able to switch to a 3-4-3 after gaining possession and switching over to counter. In doing so, the head coach made the decision to refrain from using both Jean-Paul Boëtius and Jean-Philippe Mateta. “We wanted to remain compact, threaten them in front of goal and disrupt their build-up play,” the head coach explained, who added that he had been impressed by Hertha’s first-half performance in the DFB-Pokal against Schalke. “We expected Hertha to play with three at the back, because that worked well for them against Schalke. That’s why it was important for us to not allow them any space.” That was also the reason why Beierlorzer had to make some difficult decisions. “Boëtius is a great footballer that we had to leave on the bench, because we wanted to have two quick players up front alongside Ádám Szalai. That ended up being Quaison and Levin Öztunali. That worked out for us, as they were also able to work well when we didn’t have possession. That was perfect.”

Szalai got the call due to his ability to defend well, something that Mateta – who is the more prolific goalscorer of the two – still needs to improve. “My only wish is that we had managed to better see through some of our counter-attacks in the first half by getting it to one of our players,” said Beierlorzer. “We should have taken advantage of those chances. Things were still pretty close when it was 1-0.” The opening goal was entirely the work of the two speedy FSV strikers. Öztunali played through to Quaison at the edge of the box, who beat Niklas Stark and then saw the chance to put it in the back of the net. In the moments that followed, the Swede missed two great chances.

Despite having the majority of possession, Hertha failed to create many chances for themselves. The home team made some adjustments at half time, bringing on two wingers to up their pressure on the Mainz defence. But, the Zerofiver backline was never really faced with any real threats from their opponents. Instead, it was Mainz who continued to have the better chances, who continuously won back the ball and barely allowed Hertha any attempts, with the exception of one from Pascal Köpke. Szalai came within inches of making it 2-0, before Quaison netted his second of the game after great build-up play from Onisiwo. In the end, Hertha’s goal, which came after Dedryck Boyata’s header took a deflection off Bruma, failed to change the course of the match. Instead, it was Quaison who would cap off the night by completing his hat trick from the penalty spot, after a foul from Boyata brought down Onisiwo in the box.

Beierlorzer was also full of praise for his side’s consistent performance. “There’s not a single player today who I’m not pleased with today,” he said. Next up for the Zerofivers is the Carnival home game against Schalke 04 next Sunday (18:00 CET). “We are all looking forward to this match and playing in front of a great crowd in the OPEL-ARENA,” said Schröder.