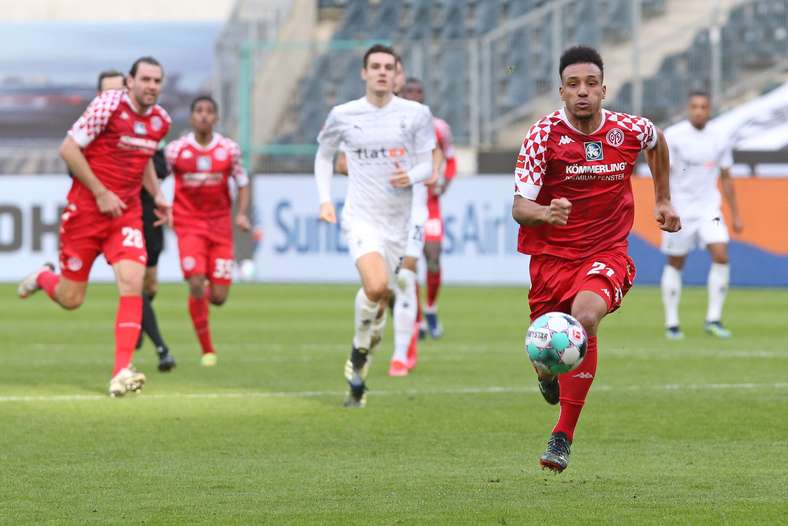 Goalscorer Karim Onisiwo and his team-mates again reeled off plenty of kilometres, sprints and tempo runs.

The journey is the goal and it is intense: a saying for the poetry album or for the "most awesome relegation battle", as sporting director Martin Schmidt said on SKY after the away win at Borussia Mönchengladbach and thus the Zerofivers next important step. Mainz has regained contact with the non-relegation places. So, time for a few feelings of happiness, but not to rest in euphoria, but to continue to work hard from game to game and improve. "Nothing has been won yet, except confidence," emphasised Christian Heidel, Board Member for Strategy, Sport and Communication, after the match, which the Red and Whites had decided in their favour with a clear plan, passion, fight and the sometimes necessary portion of luck.

Borussia Mönchengladbach can take Mainz 05 as an example. On the surface, this may seem strange at first when comparing the Bundesliga's seventeenth-placed team and the eighth-placed team and Champions League participants from the Lower Rhine. But Marco Rose, head coach of Borussia, explained at the press conference after Mainz's away win in which category his ex-club is currently impressing him: "We analysed before the game that Mainz 05, since Bo has been coach, has the most intensive runs and the second or third most sprints in the league. There's been a lot of progress there."

There has been some progress

At Borussia Park, the Zerofivers were once again on the road with intensity and, with the necessary luck, were rewarded for their efforts. With a total running distance of 118.1 kilometres, 560 intensive runs and 243 sprints, the Rheinhessen team more than satisfactorily fulfilled the basic virtues required in the relegation battle. The example for this is Karim Onisiwo, whom the 05 head coach already attested good performances in the past weeks and who now also rewarded himself with a goal, the all-important opening goal in the ninth minute. "We have to continue exactly like this. You can see it's working - what we set out to do and how we work. We are applying pressure, we have it in our own hands and we will do everything to keep Mainz 05 in the first division," emphasised Onisiwo's strike partner Ádám Szalai, who also worked enormously for the team, but whose goal was disallowed.

"We have to do a lot better in terms of performance"

But it is also a fact that the Zerofivers still have to fight hard for every point and still have a lot of room for improvement in their performance. After the match, Svensson therefore continued to focus on the content of the game, despite all the justified joy about the three points, with regard to the next match next Sunday (3.30pm CET) against FC Augsburg in the OPEL ARENA. "I think we didn't play a good first half today and were lucky to go into the break with a draw. The second half was a tad better, especially against the ball. We didn't allow much and were dangerous a few times. In the end, we also had a bit of luck on our side. Of course, we are very happy about the victory. But we have to improve our quality of play in the game, that's for sure."

Especially for the games against eye-level opponents like FCA, a win against a top team can give a lot of self-confidence and conviction. "I think wins like this are very important in a phase like this," said Danny Da Costa, referring to the cohesion and unity that the team once again exuded in every second. "I have a lot of respect for what our forwards did today, they gave a lot for us. Everyone slotted in seamlessly, no one is too shy in their work against the ball." Once again, the substitutes also had an influence on the game: Kevin Stöger scored a decisive goal, as he did against Leverkusen, and the other "players who came off the bench also had a positive impact on the game," said Svensson.

Willing to go the distance

In the end, however, football is not about individuals, but always about the club and a team that has a common goal. "The most important thing is that the team once again gave everything it had - right up to the 93rd minute. And then you get rewarded even if it's not a great day of football. They did everything they could to get the chance at the end, and they took it," said Heidel. The confidence for a historic relegation battle has grown, and Mainz is willing to take this intense path.